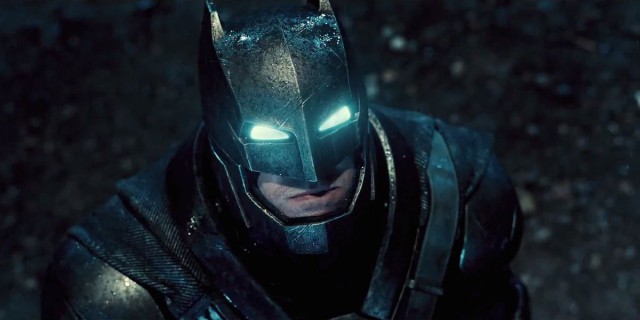 While on set for Batman v Superman, Ben Affleck couldn’t resist taking at least one of those Bat-gadgets home with him … even though the props department really didn’t want him to do that. Affleck told Premiere,

Oh, absolutely! I straight up stole a Batarang. I put it in my pocket, thinking I had earned it. The props guy came to come get it and I said no. I thought I had a kind of “movie star pass” for that kind of thing. I stayed strong and flew off to LA [with it]! The [props] guy was super pissed: “Fuck that Ben Affleck, who stole my Batarang!” I never returned it.

On the one hand, this is pretty funny. On the other hand—come on, Ben! Just give the props department their Batarang back. They’re going to need it for all those other Justice League movies you’re about to make. Also, it turned out that if Ben Affleck had only been a little more patient, he would have been allowed to take a prop home without having to steal it:

At the end of filming, Zack gave me an awesome gift: Batman’s grappling hook. I was like a little kid.

But does Zack Snyder know that Ben Affleck already stole a Batarang? How many Batman props does the man need, really? I guess he needs all of them, since Affleck’s also managed to convince his son that he’s Batman:

My son really thinks I am Batman. And I don’t know if it’s the colors, but he is sure that the FedEx guy is the Joker. Every time a package comes, “Dad, the Joker’s outside!”

This makes a weird kind of sense—Ben Affleck isn’t as rich as the fictional Bruce Wayne, but there are some similarities. Even Kevin Smith has pointed out, “that dude is Bruce Wayne, so he’s born to play that role.” Is Bruce Wayne the type of guy who would think he has a pass to steal a Batarang from a movie set?

(via CBR, image via Screen Rant)