Syrian President Now on Instagram, Because Sure, Why Not

I need help reacting to something. 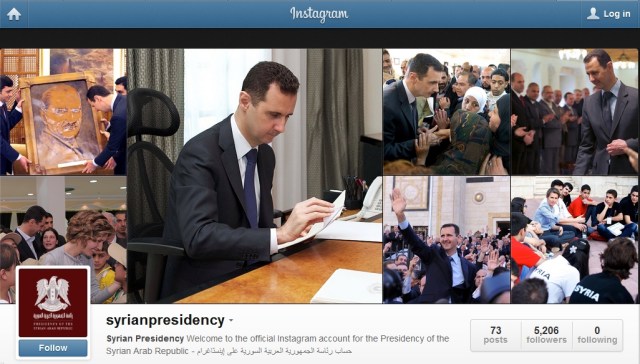 What do you do when you’re a leader who wants to communicate to the world that you’re a hip, in-touch dictator? Get on Instagram, naturally. Syrian president Bashar al-Assad is showing off his #yoloswag with photos of himself doing cool things like shaking hands, greeting crowds, visiting the sick, and most certainly not waging a bloody civil war.

He announced his Instagram, syrianpresidency, last week on his Twitter @Presidency_Sy, which itself has 1,763 followers as of now. Don’t confuse that with various Bashar al-Assad parody accounts, one of which has over 75,000. But good ol’ Bashar is hard at work maintaining his social media presence, or rather, the public relations team that’s doing its best to make him look good is. The carefully-curated series of pictures on the photo sharing network — 62 uploaded on the 24th to start things off and 11 more this week — paints an inspiring portrait of Syria’s president. In them, Assad and his glamorous wife Asma do it all — welcome religious leaders, support the troops, hang out with sports stars, and keep in touch with the younger generation.

Yes, Assad sure seems to love Instagram. Now we can expect real results the next time there’s a layout change on the site, and Assad demands that Instagram changes it back, or else. And if he does something embarrassing on social media, maybe the whole Internet will mysteriously black out again.

It’s almost enough to make you forget that not all is well in the country, and that the United Nations has put the fatalities of Syria’s civil war at 100,000. Maybe Instagram has an awesome new filter that removes civil wars? That’d be pretty sweet.