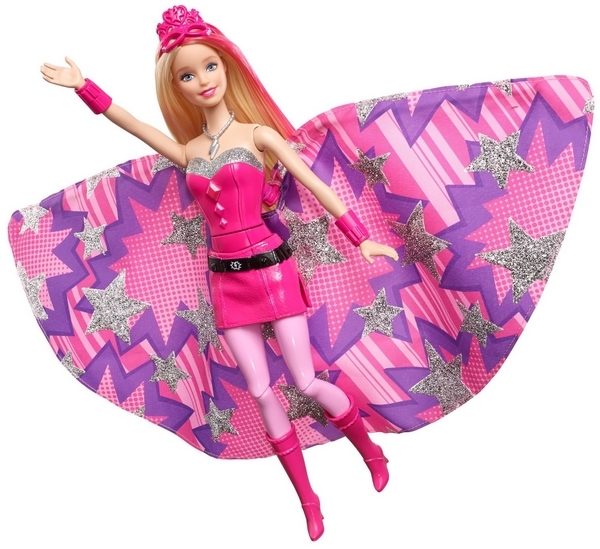 Okay, the whole princess thing aside, this is pretty cool, right? Her tiara is a MASK.

In an effort to remind girls that they can be super, too—or, okay, let’s be real, they just want in on all the money Marvel’s been making on merchandise—Mattel has launched a new line of Barbie heroes who are all about looking good in pink, wearing capes, and saving the day. That’s what I’m about, too, so I’m on board. In theory, at least.

Barbie’s crimefighting alter ego is Super Sparkle, and according to the Princess Power movie tie-in that hits theaters this weekend, she is a”modern princess with an everyday life” (okay, whatever) who gets kissed by a magical butterfly and is granted powers like flight and super strength. Also her name is Kara in the film, because that’s apparently what all female superheroes are named now, I guess. Anyway, her cousin Corinne steals powers from the bug to use for evil (I mean, of course, she has brown hair), and it’s up to Kara, her friends, and her sassy magical super-pets to figure out how to work through their differences and become friends again.

The dolls were unveiled recently at the Toy Fair in Nuremberg, complete with an unprecedented promotional stunt where Super Sparkle flew around on wires in front of a crowd of photographers:

“The world of superheroes has historically been tailored to boys, where the good guys beat the bad guys,” said Lori Pantel, Vice President of Global Brand Marketing for Barbie. “We know that girls, too, enjoy empowered heroes, but seek an outcome where the perceived bad characters transform to good, and friendship is the lasting result. We thought it was time they were inspired by a new superhero that is playful, has extraordinary abilities, and also uses her powers of forgiveness and friendship to defeat her foe, in a way that only Barbie can.”

Admittedly I’m not enamored with the whole “boys want to beat up the bad guy but girls want to ~fix~ them” thing Pantel’s got working—I mean, sometimes you can’t fix everybody. At the same time, I’m all for girls learning about positive forms of conflict resolution and seeking friendship from other girls, so I guess there are worse gender stereotypes to draw from.

You can check out the Princess Power website, “Be Super” for more—there’s even an interactive comic maker, which is pretty rad. Also, Ken is basically Lois Lane and I love that??