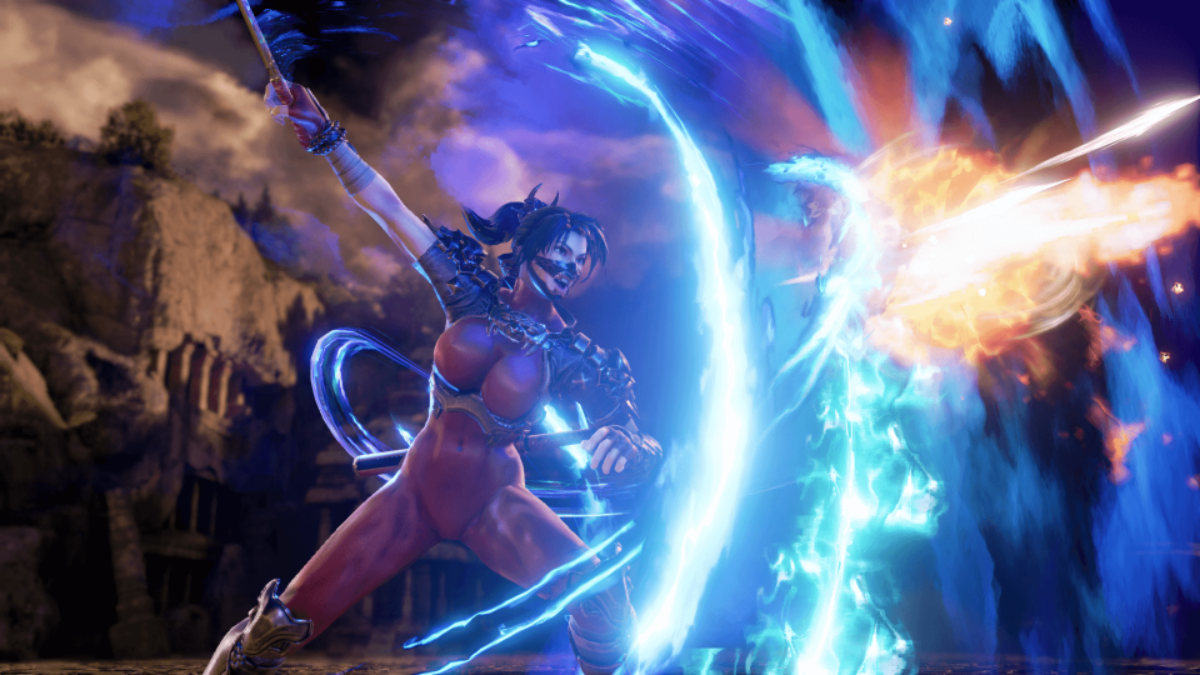 I realized in my article where I spoke about the “Girls” video by Rita Ora, that it came across that I was making judgment calls on the way women loving women are attracted to one another. While that was not my intention, I realized that I was dealing with an issue that has long been the bane of my own existence: finding the truth between genuine feminine expression and internalization of patriarchal expectation. This comes up in one area for me, more than anywhere else … sexy costumes in video games and comics.

Kotaku, in a recent article, brought up Ivy Valentine in the new trailer for the upcoming SoulCalibur game, a franchise I love deeply because, as I’ve said before, having so many ladies to play as equals “take my money” from me. However, much like Dead or Alive, the way it chose to design and animate their female characters is a problem, especially when you take into consideration their age (cough Cassandra and Talim cough).

It’s not even just the sexiness of Ivy’s costume–Taki wears full bodysuits, but her breasts are animated in a way that they jiggle dangerously. I truly clutch my own chest in pain when I see it. The women are hypersexualized and, despite their power and strength, their breasts and underwear are often on display. 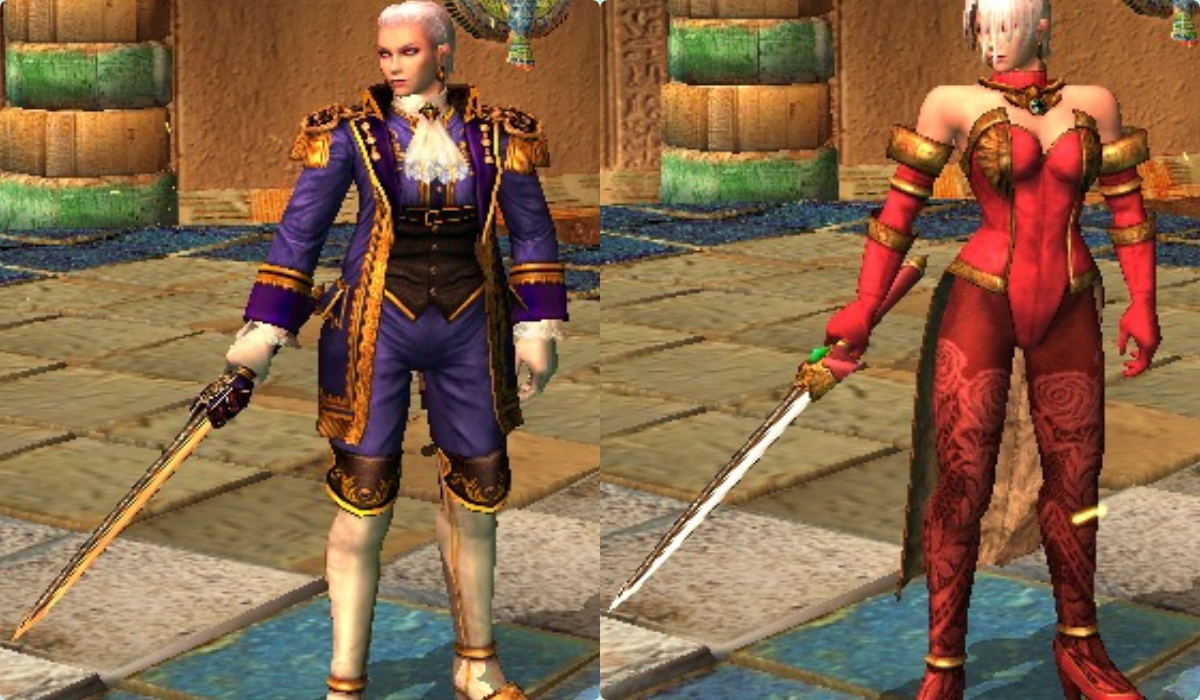 As a busty woman, I try not to hold sexy outfits against female characters as an inherent flaw because women with big chests exist, some like to be sexy and I don’t think having elements of tasteful fan service automatically means you can’t be a good character. Plus, I’ll admit it those styles of outfits were ones I gravitated towards as an insecure, awkward girl/teen.

If I was an ultimate badass fighter like Black Canary or an alien princess who would shoot green fire from my hands like Starfire, I’d wear lingerie outside. Those women were my empowerment fantasies. Starfire especially because I loved how her sexy appearance belied a very innocent person.

The problem is that these characters are being designed, mostly, by men and therefore the empowerment and pleasure I may have gotten out them, while valid for myself, is also dipped in the male gaze. The reality is they didn’t create Ivy with queer women in mind. They made her for straight men.

In the Kotaku article, the author, Cecilia D’Anastasio, mentions getting to interview Soul Caliber producer Motohiro Okubo, to ask a question she had since Soul Caliber 2: “Why do the series’ women still look like sex dolls?”  The answer:

“Of course, I am a man, as well as many of the people on the development team. That’s something that we should probably consider if that’s the opinion of a female perspective like you in the future. We weren’t necessarily going out to try and intentionally make something sexy for the purpose of being sexy.”

“It’s interesting you say you don’t set out to be sexy,” I continued, “because SoulCalibur has traditionally had really elaborate breast physics in the game. That doesn’t exist for gameplay, of course.”

“I think, as a result, the characters as a result end up being sexy,” replied Okubo. “That’s not something we can deny necessarily, but in the process of game design, we just really try to go after what we think would be cool actions, cool movement, strong, powerful movements. That is kind of a byproduct of this pursuit of trying to find what we think is pretty cool.”

Except in Soul Caliber 4, Cassandra’s critical move involved her sitting on people’s faces … with hearts coming out as she makes contact.

There is an infamous panel from an X-Men comic in which Emma Frost talks about how her costume empowers her and how it may cheapen other people, but on her, it is her battle armor. I’ve heard this and the “the hole in my chest symbolizes the void in my whatever” speech from Power Girl shared with me to explain why the costumes are more “meaningful” that they are. Which is a really nice, but ultimately shallow statement, still a noble attempt by Chris Claremont and others. 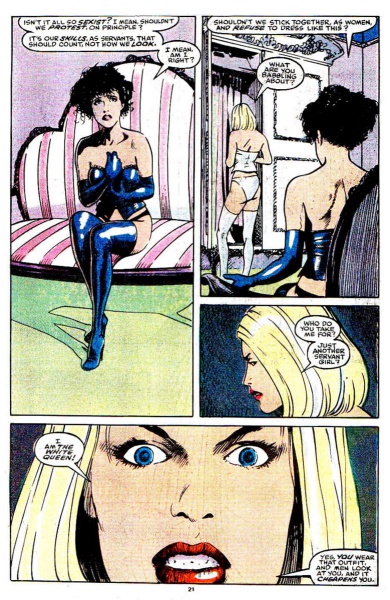 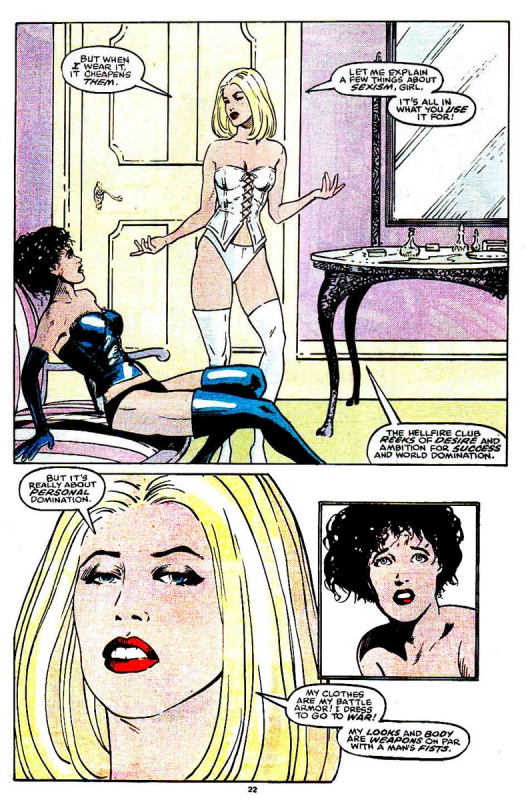 While it wouldn’t be much better, I wish male creatives would just own up to the fact that “yes” they are making wish fulfillment and fan service. There is no reason for us to see the outline of Taki’s breasts in that way other than it’s sexy. Better than pretending that it is either unintentional or a secretly “profound” empowering statement. There are times when using fanservice to make a point about tropes works, like with the comic series Empowered, but that is a rare case, and even then it’s not going to make the mark for everyone.

Then there are those of us who gravitate towards those sexy characters, who enjoy their sexuality for what it says about their character than what it says about their sex. Those of us who also love women’s bodies and want to appreciate them both in aesthetic and sexual ways. We inherit the problems of the original text and the original framing of those characters because of the men behind the pen.

I don’t think any of us who are queer or marginalized operate un-problematically or that that is even the goal. We should be able to like what we like without having to apologize for it. However, I think sometimes we all have to be thoughtfully uncomfortable about how we are shaped by the media. It’s an uncomfortable part of our reality as feminists or people who care about being socially conscious: to be aware enough to know the problems, but human enough to accept that we like things that are problematic. That we sometimes find solace in those things, regardless of what bell hooks taught us.

I am not bothered by games featuring women with large breasts but is it too much to ask that they have supportive bras at least? And if we are going to see the outline of Taki’s nipples constantly then it’s time to put Kilik and Siegfried in speedos. Voldo can’t hold it down for the men forever. Just saying.