Symbiotic Bacteria Tell Squid When To Hunt, When To Sleep 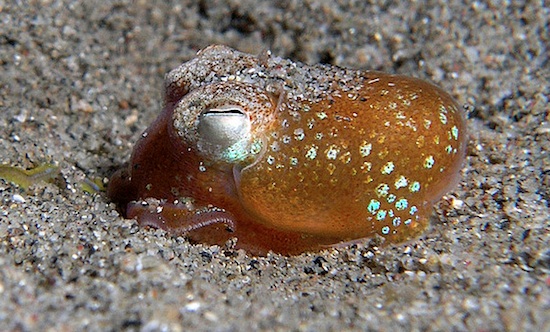 Glowing bacteria that live in the light-generating organs of the tiny bobtail squid play a key role in determining the animal’s circadian rhythms — the natural cycles that help determine when a creature sleeps, wakes, and eats — according to a study published this week in the journal mBio. It’s the first time a symbiotic bacteria has been found to determine the daily habits of its host, and could offer researchers insight into how the bacteria that live in more complicated creatures — including humans — may affect our day to day lives.

Researchers led by Margaret J. McFall-Ngai at the University of Wisconsin found that the circadian rhythms of the bobtail squid were not governed solely by light in the environment, as was commonly thought, but depended on the presence of the microbe Vibrio fischeri, a strain of light-generating bacteria that makes it’s home in the squid’s organs and acts as a kind of secondary lamp for the cephalopod.

The bobtail squid has two genes that produce the proteins that tell it what time of day it is — one in the head, and one in their light organ. Each of these genes cycles it expression — turns on and off in the course of the day. Specimens that were bred without the V. fischeri bacteria, though, were unable to cycle the expression of gene associated with their light organ. Other squid, who had defective copies of the bacteria that were present, but unable to produce light, could still cycle the gene on and off if exposed to blue light, showing that both light and the bacteria were necessary for the proper functioning of the squid’s internal clock.

McFall-Ngai and her team were excited by the results of the research, which show how the bacteria that animals play host to can affect them in important and unforeseen ways. Though it’s far too early to extrapolate the data to more complex animals, recent studies have suggested a connection between humans circadian cycles and the function of microbes in the gut. More research could one day show that, at least in this case, we’re not so different from squid after all.