Other than that it's terrible, of course. 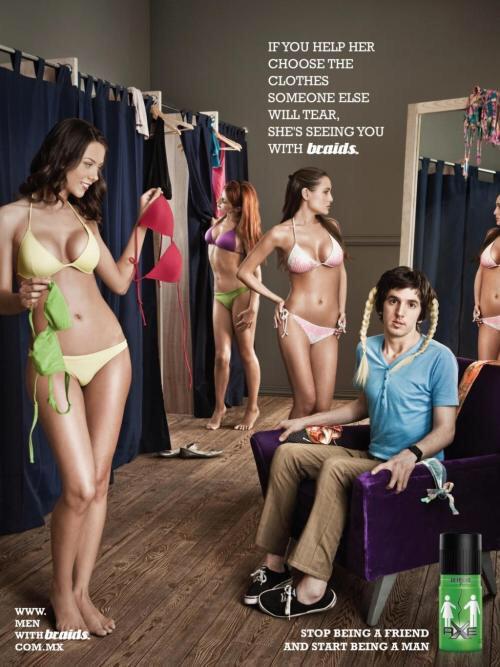 Axe Body Spray has a much-deserved reputation for buying into the worst, most toxic stereotypes about gender roles in an effort to get middle school-aged bros who don’t know any better to buy their sickening scents. But this ad in particular, which emasculates men who dare to be friends with women by suggesting they have braids, has been making the rounds on the Internet this morning.

First, some background on the ad: If you don’t remember ever having seen it, that’s because it was part of a Mexican campaign back in 2010 for a product that was literally called the Axe Ex-Friend spray. “The campaign started with the story of Esteban,” the direct marketing packet by Circus reads, “to raise awareness about the fact that friendship is the worst way to get close to a woman.” There was an online came at MenWithBraids.Mx where you help Esteban “finally conquer Carla” (ick), ads with Esteban’s shitty face on buses, bathroom mirrors, and billboards—and even a special package with blond braids that you had to cut off to get to the spray inside. Basically, it was the worst.

So why’s it suddenly getting so much criticism now? Because of Dove, that’s why.

For years, Dove’s primary marketing gimmick has been pointing out how terrible women feel about their bodies on average and then trying to convince them to feel otherwise—and cynicism aside, they can be really quite effective effective (even we’ve written positively about their ads in the past). Their latest campaign, #SpeakBeautiful, points out how many women tweet about having a negative body image and suggests that positive words will help to combat this trend. People who do tweet negatively might even be subjected to an automatic twitter bot from Dove that will tell them “nice” things instead.

@HollyElvins #SpeakBeautiful. It might sound surprising but your own words can help build self-esteem, Holly.

But Dove’s parent company, Unilever, also produces Axe, and the perceived hypocrisy of telling women the world is too focused on their appearances while also telling men that they should be focused on women’s appearances hasn’t gone unnoticed:

Let’s not forget that the people who make Dove also make Axe. But, yanno, #SpeakBeautiful As long as it sells soap. pic.twitter.com/7y6L8FRyQu

It’s worth pointing out that over the years Axe has very slowly started to soften their gross, “edgy” tone, at least in the United States—their most recent campaign, #KissForPeace, literally encourages participants to kiss each other to promote world peace. But there’s no denying that Axe’s marketing department has been responsible for a lot more harm than good since the brand first became associated with helping men get laid in 2003—and for a lot of people, there’s been far too much damage done to forgive Unilever.