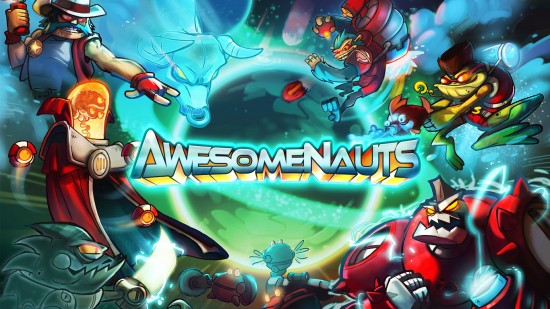 You may have recently heard of Awesomenauts, a PlayStation Network and Xbox Live Arcade game that, unfortunately, might have gotten more press from its publisher, dtp entertainment, filing for insolvency a few days before the game released than because of the game itself. Well, I’m here to tell you that Awesomenauts takes a cue from its name.

Like real-time strategy games, their offspring, multiplayer online battle arenas (MOBAs for short) do not translate well to consoles. For the unaware, MOBAs are very similar to one another. Popularized by the Warcraft III mod Defense of the Ancients, or DotA which you may be aware of, the MOBAs consist of two small teams of players, each with the goal of destroying the opposing team’s base. However, unlike a straight game of, say, StarCraft multiplayer, each team has computer-controlled “creeps,” similar to a tower defense game, that march toward the opposing team’s base, both fighting the opposing team’s creeps and players, but generally providing a way for the player characters to gain experience and funds to level up and buy equipment and items.

Think of the MOBAs as you controlling a character that is trapped in a tower defense game, but is totally aware of it, and instead of marching down the path aligned with towers, breaks away from the group of kamikaze creeps and finds other ways to win the battle.

Most MOBAs are strikingly similar. Matches usually have teams of three to five players, and there are only a few maps (compared to, for instance, the tons of maps in an online FPS), with the preferred map layout being largely the same from MOBA to MOBA. The map and characters are displayed in an overhead view, just like an RTS, with the creeps usually marching down three lanes, with one in the northwest, one in the southeast, and on in the middle. This doesn’t translate well to consoles, but Awesomenauts has a new take on the genre that translates perfectly well. Instead of an overhead view, Awesomenauts is a side-scroller. 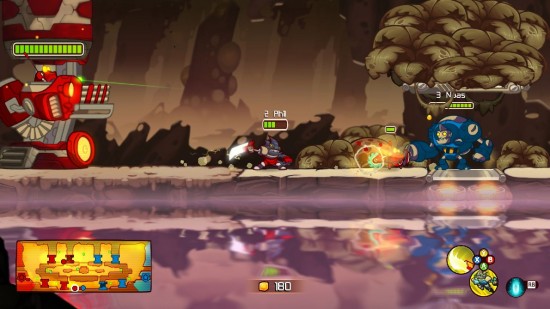 Instead of having lanes in the northwest, southeast, and middle, Awesomenauts has lanes on the top and bottom. The same general gameplay still applies, however: Creeps from each team march along their predetermined routes, providing fodder for the players, and helping teams make a push against the opposing force’s defensive, and quite powerful, turret towers.

The MOBA concept is fairly simple, but one could argue that the most important skill in traditional MOBAs comes from being able to memorize what each and every single character can do, so you know how to act around the enemy. Awesomenauts simplifies this aspect by only having six different characters to choose from, whereas, for instance, Heroes of Newerth, a traditional MOBA, has over one hundred.

Traditional MOBAs aren’t quite “active” gameplay. It’s a combination of active gameplay and MMO hotbar style skills with lengthy cooldowns. Where Awesomenauts truly shines is that it is one hundred percent active gameplay. Instead of clicking around on a map then waiting for your character to automatically walk there like in a MOBA, players control their characters by actively moving them around with the controller, including jumping, something MOBAs don’t generally offer. On top of that, rather than clicking on an enemy and having your character automatically attack them with their base attacks, Awesomenauts has characters actively attack; the player pushes or holds the attack button, and their character attacks. If an opposing player doesn’t feel like getting hit with an attack, they can actively dodge it, also usually unlike traditional MOBAs. 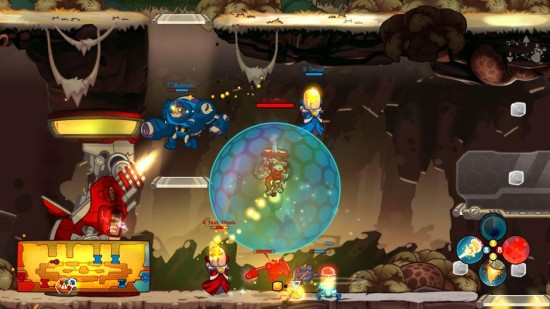 Currently, the matches are only three-versus-three, but the game (again, unlike traditional MOBAs), offers bots that are actually quite a bit smarter than bots in most other games. They run away when they’re supposed to, they push the lanes when they’re supposed to, and they even kill real players on the regular. Due to the bots always being in a match, and being relatively competent, the game allows drop-in and drop-out gameplay, and a person who leaves in the middle of a match won’t really doom a team to be a man down, which is a common blight amongst MOBAs.

Awesomenauts is a bit more persistent than traditional MOBAs as well. Players have a profile with a persistent level, which grows when end-of-the-match experience is tabulated. Each level unlocks new bonuses in a set order, ranging from new skills to choose for character loadouts to unlocking new characters. Once you hit the cap, you can gain a prestige rank, similar to the way Call of Duty handles things, and your levels and unlockables reset. 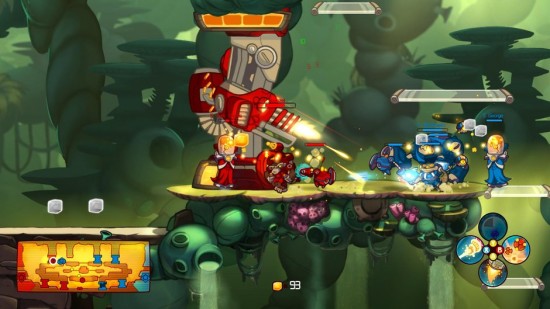 The game has only been out for four or so days now, and I’m not entirely sure if the PSN community is new to MOBAs, or if I’m some sort of veteran, but I’m blowing through matches. I’ve only lost one match in the past two days, which totaled around 6 hours of playing time, with matches lasting anywhere from four to twenty minutes. I have two characters with one hundred percent win totals, which is where most of my matches are split. I can’t imagine I’m as good at the game as my ranking (49 as of last night), so it leads me to believe that something about the game is a little imbalanced, or at the very least, the community is brand new and needs time to adjust to the genre.

Like CivRev did with the Civilization franchise, Awesomenauts manages to translate a traditionally PC-focused genre and successfully bring it to consoles. The game is only $9.99, and whether you’re new to the genre, or a veteran looking for a fun, unique take on it, Awesomenauts holds true to its name, and is pretty darn awesome.