The Origins of the Internet’s Awesomest Smiley 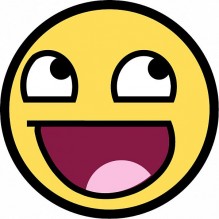 If you have ever used popular social networking tool “The Internet,” you’ve probably come across Awesome Face before: His radiant golden hue, his two-o-clock eyes, his luscious melon-shaped smile.

He’s a popular icon on certain forums we dare not name, but do you know his origins? Thanks to the intrepid sleuthing of video game designer Chris Ainsworth, we know that Awesome Face was born not in the mangers of the usual suspects, but in the forums of a Pokémon fan site.

I drew the icon years ago as part of an emoticon set he wanted for their new forum software, and I think he showed you all the other ones that were designed along with it. I’m not really sure what exactly I wanted it to represent but I think the ‘ridiculous childish glee’ that it now signifies is probably close!

I’m also a member at Something Awful and the first time I saw it posted I did a double take… I even remember my mind racing as to why and HOW someone had picked up a crappy lil’ icon off a tiny website, and I’m still not sure to this day… I assume a Pokemopolis member posted it on 4Chan. At that point I thought its posting would be a one time thing, but then I saw it more and more. It got to the point where I couldn’t read SA because everytime I saw it I’d just be completely freaked out, and naturally I came to hate it! I hoped every day that it would become bannable to post it, but the next best thing was replacing the VBCode. I also posted in BYOB in a thread Whalley made saying that I had made the icon originally, trying to get him to divulge where *he* had gotten it from. Most of SA assumed it was a ‘BYOB thing’ which was probably good because they’d probably want to lynch me if they actually knew where it was from.

I never expected it to become such a widespread meme, and I can’t say I even understand why its popular or why people want to make bag pins of it (Sure wish I could get some commission for the design though haha). It still weirds me out when I see webcomics use it though I’ve grown used to it now, sometimes I even tell nerdy neckbeard types that my dirty secret is *psst I drew THAT smiley*, which makes them say “MOAR!” or whatever is cool on 4Chan this week.

The more you know! (™) Chris Ainsworth has an extended Awesome Face chronology on his site.