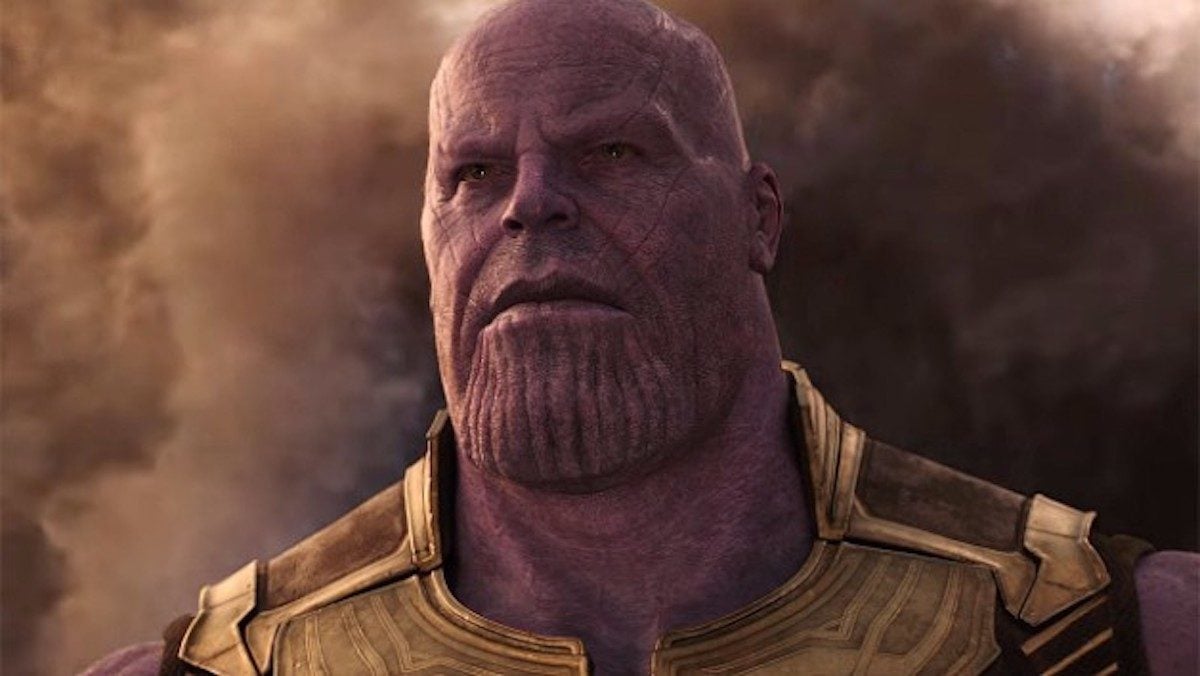 As Comicbook.com points out, the logo, which arrived Wednesday as a cover photo on Marvel’s Avengers Facebook page, is decked out in Thanos’ primary colors.

Purple and gold take precedence here, because, you know, blah blah blah Thanos is so smart and complicated and “a holy warrior” (says Anthony Russo, who should meet me after school behind the dumpsters for a fight).

“Look, if you look at Thanos throughout the movie, what’s noble about the character is it’s not about ego for him,” Anthony said about Thanos’ goals in a separate interview. “He believes that creatures and beings are suffering because of this. So he believes the road for the right way to peace and balance is through eradicating half of all life.”

In the directors’ view, Thanos is somehow not a ruthless genocidal maniac spewing pseudo-environmentalist theories that sound like they were hashed out in a freshman year weed session between wannabe ecology and philosophy majors. Sometimes I feel like we were watching totally different movies.

The Russo brothers were hell-bent on making Thanos the center of the piece in Infinity War, declaring it time and again to be “his movie” despite the presence of roughly 1,742 superheroes, and if this logo tells us anything, it’s that Thanos is positioned to be just as big in Endgame. Yay.

What’s especially annoying about this beyond the bare fact of Thanos’ suckage is that previous close artistic analysis of a leaked logo had suggested the potentially key role of Hawkeye in Endgame. That logo was done up in Hawkeye colors of purple and black; while I speculated at the time that this probably also indicated Thanos, I hoped otherwise. But now, add in the gold of Thanos’ armor, gauntlets, Gauntlet, double-bladed sword-thing etc. and this color palette is telling a decidedly villainous story about a terrible villain.

But Kaila, you say, this is just an early logo with some shades of lilac, can you maybe slow your roll? Listen, I know, I know, but let’s be real: if this was done up in vibrant greens, would we not be discussing that those colors hinted at the Hulk or Loki’s prominence? If it were red, would we not suspect it was highlighting Iron Man, or blue for Captain America, or silver and red for Thor, or if red and blue and gold the rise of Captain Marvel? Are we going to play like the choice of color schemes doesn’t matter in designing a multi-billion-dollar franchise’s marketing campaign?

I mean, I just made the ground-breaking discovery that Infinity War‘s logo is the exact same hue as the Soul Stone, arguably the most important Infinity Stone plot-wise. This is crucial stuff here, people. Crucial stuff which unfortunately points to Thanos as still hanging around a lot in Endgame, probably passing the time between scenes posting to Malthusian message boards.

What scary things did you see today beyond indigo CGI overlays of Josh Brolin’s face?