One of the best things about modern society is that we can form concrete, immediate opinions about the films we’re interested in before they’ve even been released. Ben Affleck as Batman? Screw that guy. New leaked images of the ninja turtles? I DON’T LIKE IT. But these Avengers 2 photos we been looking at aren’t too bad, considering.

Unfortunately we don’t have the rights to host any of these images ourselves so you’ll have to click through to the Getty Images site to see them. Doesn’t mean we can’t talk about them, of course — and compare them to the leaked concept art from last week, too. Check out what each of us on Team Geekosystem had to say: 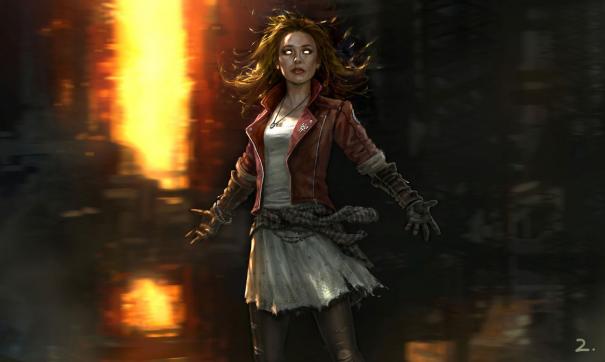 Victoria: Elizabeth Olsen continues to not be wearing the iconic costume everyone was hoping for, but you know what? It’s not awful. I like the black dress better than the white from the above art, and the long bohemian hair definitely sets her apart from the other female characters in the franchise (you know, all two of them). I can see this cosplay working for a lot of fans in the near future. And by “future,” I mean this exact second, because you know somebody’s working on it already. I applaud you, amateur costume designers of Tumblr.

Glen: I’m pretty on board with the Scarlet Witch outfit. It looks less like a costume, which I think works out better most of the time in movies. The character’s costume looks fine on a page, but if you try to bring that headdress to life on screen, you’re going to lose something in the translation.

Dan: I’m in the “it’s not a costume, and that’s pretty great” camp, too. It looks like something a real person would actually wear if they had some superheroing to do without looking like they actually sat down and had a costume custom designed for them like The Incredibles. It’s also not overly skin-heavy, which is a nice change for a female superhero costume.

Carolyn: I totally agree with Dan. The costume is believable and should give her the range of motion necessary for optimum comfortable ass-kicking.

Victoria: The white hair is back! With hideous roots, but hey, we all can’t be Daenerys Targaryen. They’re still going with the athletic gear look that we first saw in the concept art, but there’s more white streaks in the final version that are wonderfully reminiscent of the original comic Quicksilver design. Certainly it makes more sense to me than whatever doofy googles the Pietro of Days of Future Past was wearing on that Empire Magazine cover.

Anyway, Looking at both the siblings together, it’s clear that the concept was always meant to be less, “we’ve suited up and we’re gonna punch some evil aliens in their evil faces” as in the first movie, and more,”this is what we wear just for funsies and oh boy is that Ultron now we have to fight.” I’m 100% okay with this—it gives us a decent amount of insight into these versions of the characters to start with, but leaves room for more interesting and “official” costume designs later on.

Glen: Remember when I said I liked that Scarlet Witch’s costume doesn’t look like a costume and how I think that’s great? This is the opposite of that. Not that I’m a huge fan of Quicksilver’s costume in general, but this in particular just looks like some kind of bad 70’s sci-fi movie’s idea of what people will wear in the future. Unless Quicksilver’s mimicking Logan’s Run here, I’m not that impressed.

Dan: I’m fine with this one. Scarlett Witch’s is better, but this one looks a little more function over form. It goes for a more traditional spandex costume look while still looking like Under Armour or something else you could really pick up off a store shelf instead of, again, looking custom-made, so I’m a fan of that.

Carolyn: Like Scarlet Witch’s costume, I’m totally fine with this one because it’s something I can imagine a real life person in a super hero situation might wear. Hideous, but functional. Although, dear God, Aaron Taylor Johnson, you are so pretty but that hair is just not. Occupational hazard, I guess. 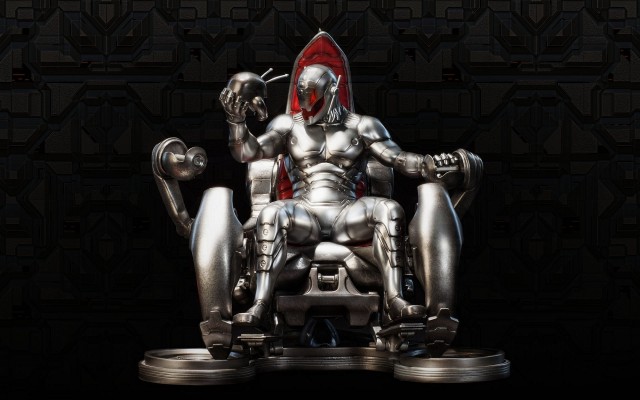 Victoria: Okay, listen. Clearly this is not the finished version of Ultron, and he’s just there for tracking or they’ll throw some CGI elements on top of him or something. I mean, c’mon, the dude’s wearing sneakers right now. But the image itself is still hilarious to me. Maybe it’s because it makes Ultron look like a Tokusatsu villain. I don’t know. Either way, the few design elements we can see are reminiscent of the Iron Man suit, but a little more curved and twisted-looking than Stark’s usual blocky, geometric look. Which makes sense, of course, because that’s how you differentiate heroes from villains: with twisty-looking armor.

Glen: Like Victoria said, this is obviously not what Ultron will look like in the finished product. That’s for the best because currently that looks like a Cylon from the original Battlestar Galactica.

Dan: I don’t exactly hate this, but the final version should definitely look a lot better. Right now, I’m getting a kind of Silver Surfer meets Cyberman kind of vibe, which isn’t awful, but it could use just a bit of fine-tuning before things are finalized so it doesn’t wind up in silly-looking, Raimi Spider-Man Green Goblin territory.

Carolyn: This is unbearably goofy, but hopefully the goof is on us and this is nowhere near the finished version. Keep the sneakers though! As I said before, function over fashion.

You can check out the rest of the images at Getty—and hey, Hawkeye’s even there! So everybody who saw that one trailer of Winter Soldier where Natasha looked all upset over a dead body can relax now, because they haven’t killed off Clint yet. Maybe he’ll even get more screen time!

Anyway, what do you guys think? Excited? Disappointed?