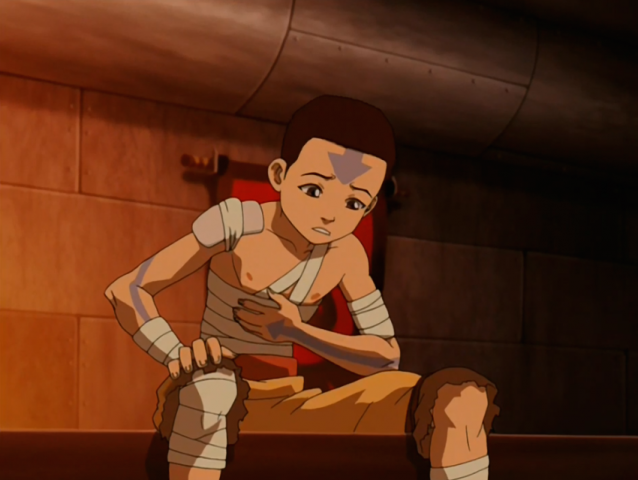 Previously on Avatar: The Last Airbender: “Zuko, you fucked up.” That’s it. That’s the “previously on.” Season three. LET’S DO THIS, MOTHERTRUCKERS.

If you need to catch up, here are my newbie recaps for books one and two of Avatar.

First and most important: Aang wakes up from being in a coma for a few weeks and he has hair now. 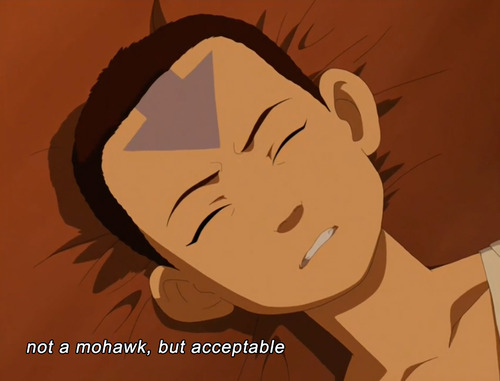 Now, I was pretty ?!?!?!?! at first–can Aang even grow hair? We’ve never seen him with stubble, even. Has he been shaving every day, because that seems a little impractical if you’re being chased by the Fire Nation?—until it was pointed out to me that we actually do see him shave during “Tales of Ba Sing Se.” Which is a great and wonderful and completely canonical explanation for his normal cueball look. It is also one that I reject completely in favor of this: 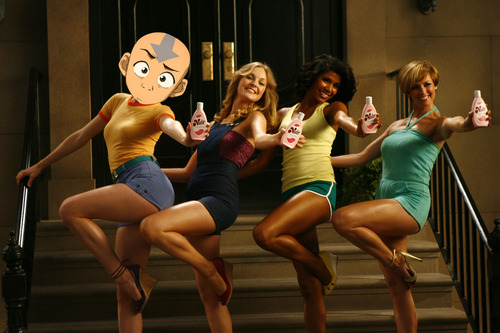 That’s my headcanon, and I’m feeling pretty good about it.

So after Katara brought Aang back from the bring of death, the Gaang dropped the Earth King and Bosco off so the pair of them could do some explorin’, which is a good way to shuffle the Earth King out of a storyline he doesn’t need to be in, plus it fits his character and it’s stupid cute. 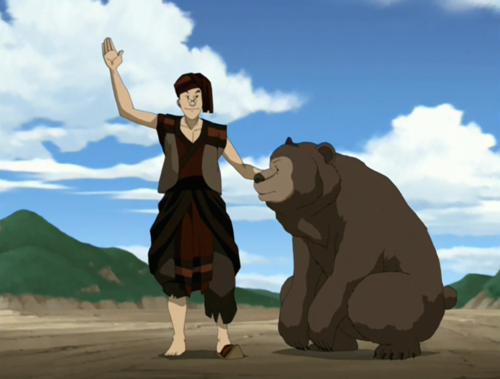 Then the group headed to Camellia Bay, where they met up with Bato and Katara and Sokka’s dad Hakota. The group steals a Fire Nation ship, because fun family times! At some point they meet up with Jet’s old buds Pipsqueak and the Duke as well. Moment of silence for the lack of Smellerbee.

The plan now is a modified version of the solar eclipse invasion—instead of going after the Fire Nation with a whole army when the eclipse happens, they’ll just infiltrate the Fire Nation with a tiny force. That’s made even easier, Sokka explains, by the fact that everyone thinks Aang is dead. But in order for no one to expect the Spanish Inquisition the Avatar to show up, Aang has to lay low for a while. That causes Aang’s guilt issues to flare up again, big-time. “People will think I abandoned them! Again!”

Sweetcheeks, people think you died, not skipped town. And I get feeling bad about having to stay hidden while your buds deal with an enemy ship that twigs that you’re not Fire Nation, but seriously, Toph and Katara are there—they got this. Aang’s approaching this people-think-I’m-dead thing very irrationally, but in a way that fits his character. For all that I tend to think of Zuko’s the one who’s fucked up beyond the telling of it (and he is), Aang has his fair share of capital-I Issues too. 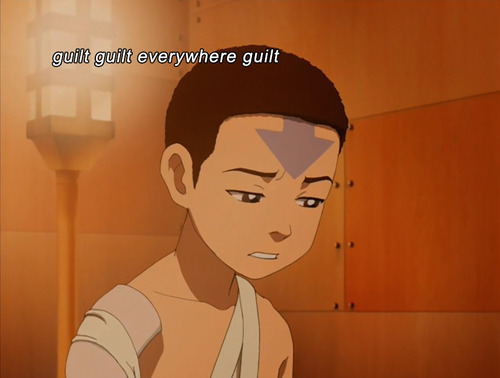 Aang, determined to make up for his earlier failure and face the Fire Lord alone, escapes and glides off into the sunset. It’s part not wanting people to risk their lives for him and part wanting to redeem himself, aka wanting his honor back. OH, THE ZUKO PARALLELS. From my notes:

Katara is predictably pissed that Aang would do something so stupid, because he’s not even fully healed yet, God dammit. Katara’s also upset with her dad because she feels abandoned by him. She knows he had to go off to war, but her only remaining parent left town when she was just a kid, and hey, she’s upset. She and Hakota bond. It’s very sweet.

Aang, gliding through a storm, pretty quickly realizes that he fucked up and should have listened to Katara.

It’s time for another past life intervention from Roku, who shows up and basically pulls a “my bad,” saying it’s his fault Aang even has to deal with all this Fire Nation bullshit. Which. True. Yue (YUUUUEEEE!) also pops down for a quick pep talk, which I hope doesn’t fuck up the tides considering she is literally the moon and all. 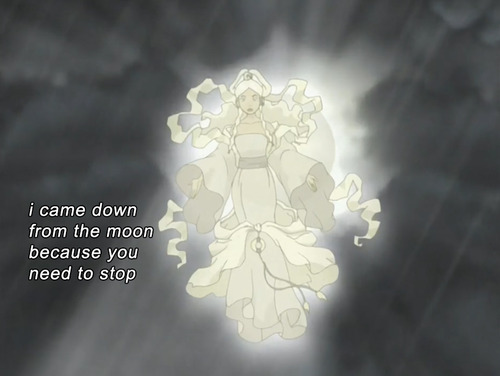 Aang fashions a DIY surfbort surfboard and makes it to a tiny volcanic island. When he wakes up the next morning Katara, Sokka, Toph, Appa, and Momo are there, and they all have a nice group hug. Sokka explains that they’ll meet up with Hakota’s invasion force on the day of the eclipse, and Aang admits that it’s better that no one knows he’s alive for the time being. He props his now-ruined glider up in a crack on the volcano. It burns up. It’s sad.

Also sad: EVERYTHING RELATED TO ZUKO. I know. I want to talk about him. You’re shocked.

He starts this episode in full-on brooding mode. “I wonder what’s changed,” he ponders. “I wonder if I’ve changed.” May, whom I guess is his girlfriend now, responds that she literally could not give even one hundredth of a percent of a shit, so he should stop with the angst shit and kiss her already before she snaps. AH, YOUNG LOVE.

Back in the Fire Nation Capital, Zuko and Azula are welcomed home as conquerors, Ba Sing Se having been completely overrun by the Fire Nation. We even get a cameo from Hope, the cheesily named baby. 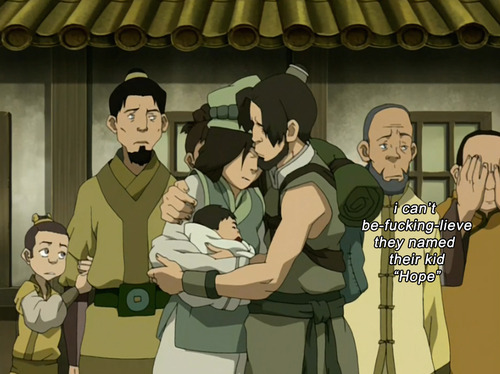 Zuko, after all he went through to get back home, isn’t too pleased to actually be there. He knows he fucked up in following Azula, not Iroh, but he’s trapped. And the shot of him going into the throne room to see his dad for the first time since being banished is fucking awful, because he looks like a scared, abused kid, WHICH HE IS: 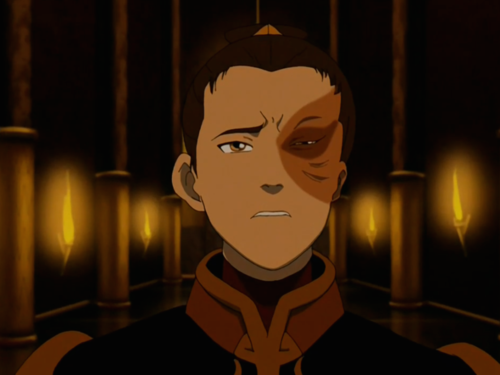 LOOK AT THIS SHIT. HE’S LEGIT SCARED. WHY AM I WATCHING THIS SHOW?!

However, Ozai’s pretty mild by Ozai standards, telling Zuko that he’s redeemed himself and he’s proud of him… while sitting on his throne surrounded by flames like the dramatic asshole he is. 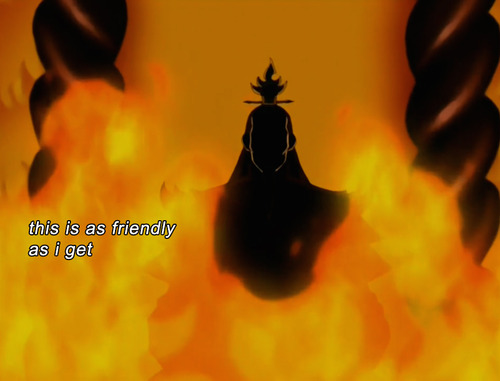 HOWEVER, it comes out that the reason Zuko’s in Ozai’s good books is that Azula told Ozai that Zuko killed Aang. Zuko approaches Azula and asks her what the fuck, since she was the one who zapped Avatar State!Aang with lighting. Azula says she gave Zuko the credit to be nice, which Zuko doesn’t buy for a second, because now he remembers that Azula always lies. Not last episode. NOW.

It’s never explicitly stated, but it’s pretty heavily implied that what’s going on is that Azula suspects that Aang might be alive, and she’s setting it up so just in case he pops up again—which we know will happen, and which Zuko probably knows will happen, since he knows about Katara’s special healing water—Zuko will be in serious fucking trouble with his father. Even in the moment of their victory, of their ostensibly coming together as a family, of Azula winning Zuko over to her side, she still is figuring out ways to fuck him over even more.

It’s evil and smart as shit.

It’s Azula. And I love her.