"A hero doesn’t have to be defined so narrowly.” 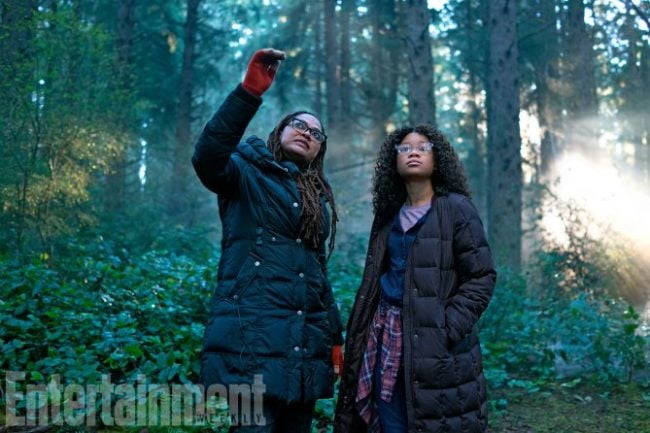 In case you somehow missed it, a new Wrinkle in Time trailer dropped last night and it’ll take you to magical worlds full of beauty and fantastical creatures while inspiring you to be a warrior in every aspect of your life. Not lost on many viewers was the beautiful diversity of the film, a different kind of magic (#BlackGirlMagic) of seeing Storm Reid as the science-savvy hero of the iconic story.

Ava DuVernay and Ryan Coogler recently spoke at Vulture Festival LA about their highly-anticipated films as both are directing genre blockbusters that fans also anticipate being huge in advancing representation for women and people of color. Black Panther has more women and black actors than any MCU movie and A Wrinkle in Time has an amazingly diverse cast, promising a shift in genres that have traditionally neglected people of color (a fact that’s very frustrating, considering what a fruitful and powerful genre it is for talking about oppression).

DuVernay comments on that pattern, saying, “I’m excited to share a sci-fi vision through the lens of a black woman because so often we’re watching sci-fi films through one specific lens – a predominantly white male lens for decades and decades.” However, she also notes, “Not that mine will be radically different, but there might be a softness, edge or a color change to it that we may have not seen — or have seen, but skewed. The bottom line is we don’t know until we see it, so why don’t we just see it?”

In a previous interview with Entertainment Weekly, the Selma director shared that the first image she had of the film “was to place a brown girl in that role of Meg, a girl traveling to different planets and encountering beings and situations that I’d never seen a girl of color in”. Of course, this also extends to the other roles as well, like the three “Mrs.” characters played by Oprah Winfrey, Reese Witherspoon, and Mindy Kaling.

“There are no black or southeast Asian ‘Mrs.’ in the book. In the book, the girl is not bi-racial and the little boy is not a little Filipino-American boy. We took liberties to be true to the spirit, but we freed ourselves and freed our imagination to bring these fairytales and fantasies into the current time, which is one that should be much more inclusive.”

In the Vulture talk, she emphasizes again that she has a niece “who is the real Meg”:

“I want her to see all that’s possible for her and to show her that she doesn’t have to wait until she’s 32 years old to figure it out. She should be able to know that she can walk through any door — even if the door is not there. If you start walking towards it, it will appear for you. And it’s not only for black girls but all kinds of girls — and boys too. A hero doesn’t have to be defined so narrowly.”

Coogler shares a similar sentiment, saying, “To see a movie where somebody looks like me that is a king and knows their ancestry and has an army of incredible folks around them and who believe in them? I don’t know what that would have done for me when I was 10 years old.”