After seeing snippets and hints for seemingly forever, we finally have the full video for Jay-Z’s “Family Feud,” featuring Queen Bey and directed by another Queen, Ava DuVernay. Oh yeah, and it stars damn near every celebrity on the planet.

If you’re going to watch this, strap in. At nearly eight minutes long, the song doesn’t even get started until about five and a half minutes in. However, what comes before that is epic in scope.

It starts in the year 2444, in what is apparently a time that has a president and democracy, but also still values things like nobility and Important Families. We get to see Thandie Newton allow her lover to take out her treacherous brother (Michael B. Jordan), before she takes loverboy out, declaring, “It’s not his. It’s not yours. It’s my throne.”

Cut to Jessica Chastain’s journalist interviewing Madame President and Mister President about that murder. (It seems that, in the future, married couples preside together. None of that “First Lady” nonsense. But also very much like a regression into monarchy.) It seems that Thandie Newton is a part of his family, and now the citizens expect him to explain himself.

He then goes into the main theme of the video: How his family has made its share of mistakes, but that they are also responsible for the very democracy and progress that the country has today. We flashback to his family in 2148 (what’s up, David Oyelowo!), where there is apparently some kind of political disturbance after a long peace. We then go back further to 2096, when there was a crapton of civil unrest.

We then go back to 2050, and the founding of a new United States. One with foremothers: 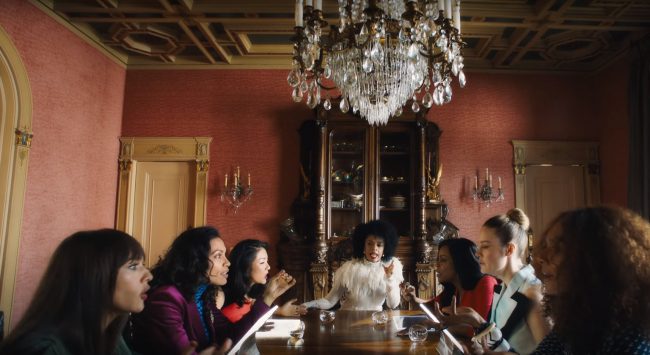 Honestly, if these women were legit running our country? I wouldn’t be mad. (not in the shot, Mindy Kaling)

At the head at this table of women is Adult Blue Ivy. That’s right. Blue Ivy is one of the foremothers of the new United States, and she remembers a time when she was a little girl, and her father taught her an important lesson: Nobody wins when the family feuds.

The message gets a little wobbly, and is a bit too centered around money and clout, but the core is sound. The central idea seems to be that a group can’t advance if its members are constantly fighting among themselves. That sure, money is important, but even more important is the connection of family members, whether that means your immediate family, or the greater family of your community.

For Jay-Z, that means the black community, and one of my favorite lines is: What’s better than one billionaire? Two. Especially if they from the same hue as you. He talks about black-owned things, as well as the fact that he’s trying to think community but seems frustrated by the way people constantly compare themselves to each other, rather than support each other and build each other up.

He also talks about what he’s learned from his own mistakes, and I was heartened to hear in one line that he recognizes that when he first watched The Godfather, he was so consumed by the glamour of being a mob boss that he completely missed the point the film was trying to make:

I watched Godfather, I missed that whole shit
my consciousness was Michael’s common sense
I missed the karma that came as a consequence

I was happy to see that he learned this lesson, especially in light of what I wrote about toxic fanboys just earlier.

Ava DuVernay both directed and co-wrote this mini-film with Jay-Z, which makes a lot of sense, considering how fiercely feminine this whole endeavor feels. From Thandie Newton asserting her power in the opening scene, to Jessica Chastain questioning a male president who is a co-president with his wife, to a man and a woman being in charge of maintaining political balance, to a committee of foremothers creating a new government, DuVernay asserts that the future is female.

However, that doesn’t mean devoid of men. It means in balance with men. The brightest points in the future history being painted here are the times when there’s a man and a woman working and ruling together to ensure the freedom of all.

The entire point is that we need to value relationships and human connection over wealth, communication over dominance. That the only way for the black community, or any community, to advance is for them to see each other as a family and have each other’s backs, rather than being “every person for themselves.” These are all messages I can get behind.

“Family Feud” is a track from Jay-Z’s new album 4:44, which can be streamed exclusively on Tidal.