Well great, now all I want from life is Nick Offerman to voice a talking air bison. 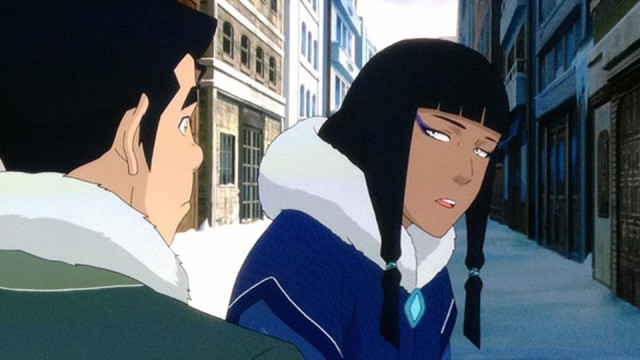 At this point it seems like we’ve been waiting eons for the new season of Legend of Korra to grace our television screens, and after all that it’s still not ready. But hold fast, friends! Some of the casting picks for new characters have been released, and they’ve made us even more excited than we already were for the eventually upcoming Book Two. Why? Because among the new names are Aubrey Plaza (Parks and Recreation), Lisa Edelstein (House), and James Remar (Dexter). Holy penguin-bears, somebody hold me.

Plaza has been tapped to play Eska, one of Korra’s waterbending cousins and the princess of the Northern Water Tribe. Judging from the type of character Plaza usually plays, Eska’s not going to be the demure girl that former-Princess-turned-moon Yue was. This thrills me more than is probably appropriate.

Her twin brother, Desna, will be voiced by Aaron Himelstein from Joan of Arcadia; their father, Unalaq, is Adrian LaTourelle from Sons of Anarchy. Apparently he’s the leader of both the Northern and Southern tribe, according to several sources. Screw the stupid love triangles, I want to hear more about how that political union happened.

Korra’s father will also be getting a new voice, too, in the form of James Remar — guess Carlos Alazraqui was busy. No word on whether Alex McKenna will also be getting ousted from her brief role as Senna, but we do know that Lisa Edelstein will be playing Kya, Avatar Aang and Katara’s firstborn waterbending daughter. And then there’s also Varrick (Jon Michael Higgins of Best in Show), a Southern Water Tribe member who’s interested in a business relationship with Asami Sato.

Book Two will prominently feature parts of the Avatar world outside of Republic City, including the South Pole where the Southern Water Tribe lives. Korra will have to deal with the fallout from her defeat of Amon and the Equalists– once again, hopefully without any love triangles. Though I wouldn’t say no to Bolin hooking up with Eska in an April/Andy type situation. Poor Bolin needs some love.