Attack on Titan Creator on Character's Gender | The Mary Sue 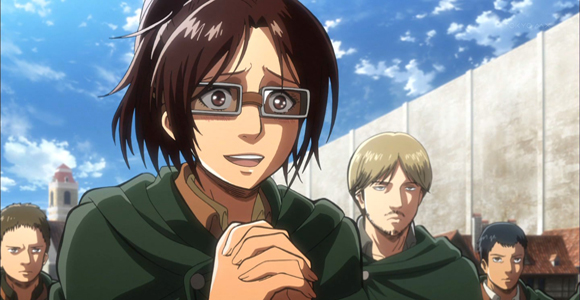 Manga artist and writer Hajime Isayama created Attack on Titan, a manga and anime that is beautiful, dark, and complex…and also extremely popular.  It also features a character named Zoë Hange who, despite their female first name, is consistently not gendered in the course of the manga or anime.  Isayama has clearly done this deliberately, as he’s repeatedly avoided giving Hange (or Hanji as the name is often written) a specific binary gender. Publisher Kodansha has now gotten in on the discussion via their Tumblr account and is attempting to keep the Attack on Titan manga as close to Isayama’s vision as possible.

After offering comments like “I think it’s better if I don’t say either way” regarding Hange’s gender in 2011, Isayama has apparently finally spoken more definitively via Kondansha, with this exchange occurring on the Kodansha tumblr:

Anonymous asked: Hello, I wanted to ask you guys a question about Attack on Titan… Did you confirm the characters’ genders with Isayama? For example, did you confirm with him that Hange is a woman? Or was it assumed? And do you usually confirm this kind of stuff with the authors? (sorry if someone has already asked this)

Isayama has confirmed that… we’re not allowed to confirm Hange’s gender. He has instructed us to avoid gendered pronouns when referring to Hange, or at least to use he AND she with equal frequency.

Kodansha has since decided to go back to previous volumes and adjust the gender references as necessary.  One interesting part of all of this is that it’s simply not a problem with the Japanese versions of the manga because gendered pronouns are so rarely used (names or honorifics being a more standard way of referring to someone). It’s only in the English translation that this became an issue, especially as the US fandom has grown and grown to the point of being the largest anime and manga fandoms on Tumblr. While some of the responses to Kodansha’s statement have been mixed at best (including one fan who has gotten threatening messages for using “she” to refer to Kange still), many have been extremely positive, such as this excited response:

as a non-binary person who has literally NEVER seen a character or popular figure in media who is not gendered as a man or a woman a single time in their entire life, your dedication to using the communicating with isayama and using the right pronouns for hanji/hange means SO much to me! thank you!!!

Major points to both Isayama and Kodansha for sticking to their guns and refusing to define Hange’s gender. At the end of the day, if the series creator doesn’t think that this character needs to be binary or otherwise have their gender defined, what else matters? Especially when it can offer such great representation for people who rarely get to see themselves in popular entertainment.