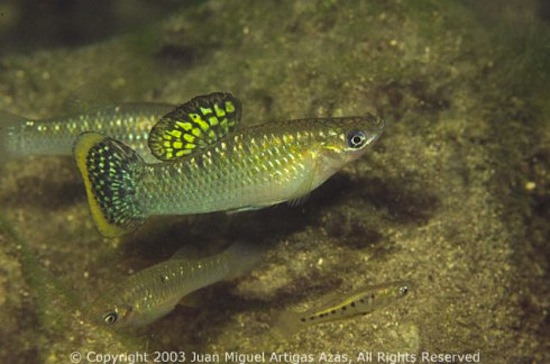 We’ve brought you stories about some of the more interesting techniques animals will go to to improve, even slightly, their chances at breeding. Heck, you barely need us for that — head down to your local watering hole any Friday night and you’ll no doubt find folks going to some lengths for the chance to land a mate, even (or especially?) just for one evening. A study published online today in the journal Biology Letters suggests that we may have a winner in the “weird ways to get yours” sweepstakes, though, as researchers studying the Atlantic molly, a small tropical fish related to the guppy, found that some smaller, less dominant examples of Atlantic molly manhood have developed a curious mating tactic. To improve their chances of breeding with a female, they will first copulate with other males to demonstrate their sexual fitness.

Non-dominant Atlantic molly males are often overlooked by females who generally prefer to become intimate with larger, stronger, more brightly colored specimens. What can we say except that… yeah, we know that feel, bro. What we don’t have is a frame of reference for the male molly’s means of demonstrating his masculinity to unconvinced potential paramours. In the study, University of Frankfurt researchers observed that:

P. mexicana females increase their preference for initially non-preferred males not only after observing those males interacting sexually with females, but also when having observed them initiating homosexual behaviour.

Loosely translated: a male molly initially shot down by a potential mate has a better chance of sealing the deal after that female sees him making the beast with two backs — or in this case, the fish with two fins — with another molly, whether that molly is female or male. The phenomenon — known as mate choice copying — has been demonstrated in mollies before, and will be familiar to plenty of humans who have suddenly felt more attractive to members of the opposite sex the second they’re in a relationship. This study, though, marks the first time researchers have seen homosexual behavior positively impact a male’s chances for heterosexual coupling.

Noting that homosexual behavior is fairly common in males of the species, the University of Frankfurt team theorizes that the behavior may have evolved as a means for less dominant males to increase their attractiveness to females who might otherwise not see them as potential mates. Which, yes, seems a tad counterintuitive to us, but hey, who are we to argue with millions of years of evolution?