Asteroid Belts Could Be Key For Extraterrestrial Life | The Mary Sue

A “Just Right” Asteroid Belt Could Be Key to Extraterrestrial Life 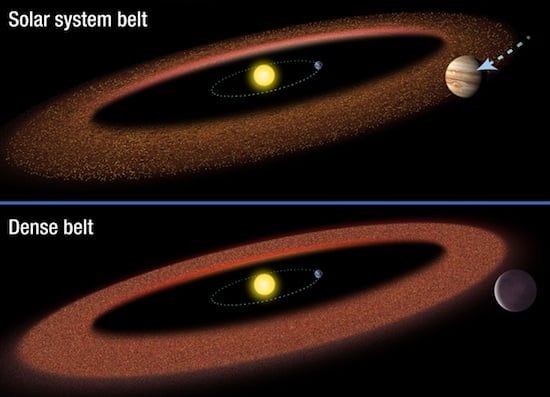 The map for seeking out life elsewhere in the cosmos may have just gotten a new must-have accessory. A new study from NASA suggests that having an asteroid belt like our own solar system’s could be a key ingredient in the development of extraterrestrial life.

The importance of asteroids to life may come as a surprise, seeing as they can also pose a danger to life that has already developed on the planet. Just ask the dinosaurs. Oh wait, you can’t because they we’re wiped out by (most likely) an asteroid striking the Earth. Recent research, though, suggests that asteroids could also be responsible for carrying water and other building blocks of life to the Earth, where they had a chance to incubate and develop.

Asteroid fields can also be the good fences that make good celestial neighbors. In a solar system with a more diffuse asteroid field, larger planets like Jupiter could conceivably migrate closer to the sun, no longer acting as important shock absorbers for inner planets like Earth.

A more dense asteroid field, though, would be packed with so many rocks caroming off of one another that the barrage of asteroids would no doubt have nipped life on Earth in the bud before it even had a chance. Sure, that would have spared the universe the prospect of acknowledging that Honey Boo Boo is a thing that exists, but it would have also prevented the invention of Nutella. I think we can fairly call that a wash.

Ultimately, there are two ways of looking at this if you’re someone excited by the prospect of finding life elsewhere in the universe, which, frankly, if you’re not, what is wrong with you? You can take the pessimistic angle that there are so many things that need to go right in a solar system for a planet to develop life — having a planet in the not-too-hot, not-too-cold “Goldilocks Zone,” having a bigger planet like Jupiter take some hits while life gains its footing, and now having an asteroid field that’s not too dense and not too diffuse — that it’s unlikely we’ll ever find our cosmic neighbors, if they’re even out there.

Sure, you could do that, but it sounds like an unpleasant way to go about your day, especially when you have the more optimistic option of looking at this as one more thing that can narrow our search for life in the future, saving us time and resources and bringing us one small step closer to understanding what makes life possible, and thus one step closer to knowing that we are not alone.