An Even Better Look at Asteroid 1998 QE2 and Its Moon 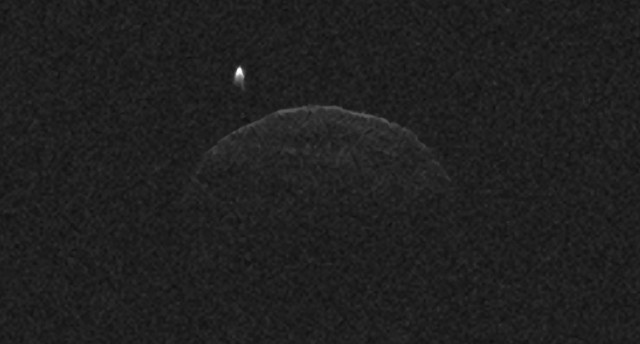 As you may recall, asteroid 1998 QE2 gave the Earth a buzz just over a week ago. Upon close examination, it was determined that 1998 QE2 actually had a moon of its own. That’s not unheard of, though we didn’t know 1998 QE2 had one. Some images were combined to form a video of the binary group shortly after discovery, but now an even better look at the two has been created thanks to scientists working with the Deep Space Network antenna at Goldstone, California.

The video, which you can watch just below, is a composite of 55 images collected at Goldstone on June 1, 2013. Each one of the images accounts for about five minutes of data collection, so we’re looking at roughly 4.6 hours worth of radar data. Check it out:

At the time these images were grabbed, 1998 QE2 was around 3.75 million miles from Earth, and each pixel equates to about 125 feet. Thanks to these snazzy radar images, and careful analysis, we know a lot more about the asteroid and its moon than we did previously.
For example, the primary body rotates once every five hours, and has a diameter that’s approximately 1.9 miles. The moon, on the other hand, completes an orbit of the primary body once every 32 hours, and is approximately 2,000 feat wide. Similar to our own moon, it has a synchronous rotation — the same patch of surface is always shown to the main body.