LGBTQ fans are furious over a forced heterosexual relationship in the latest DLC. 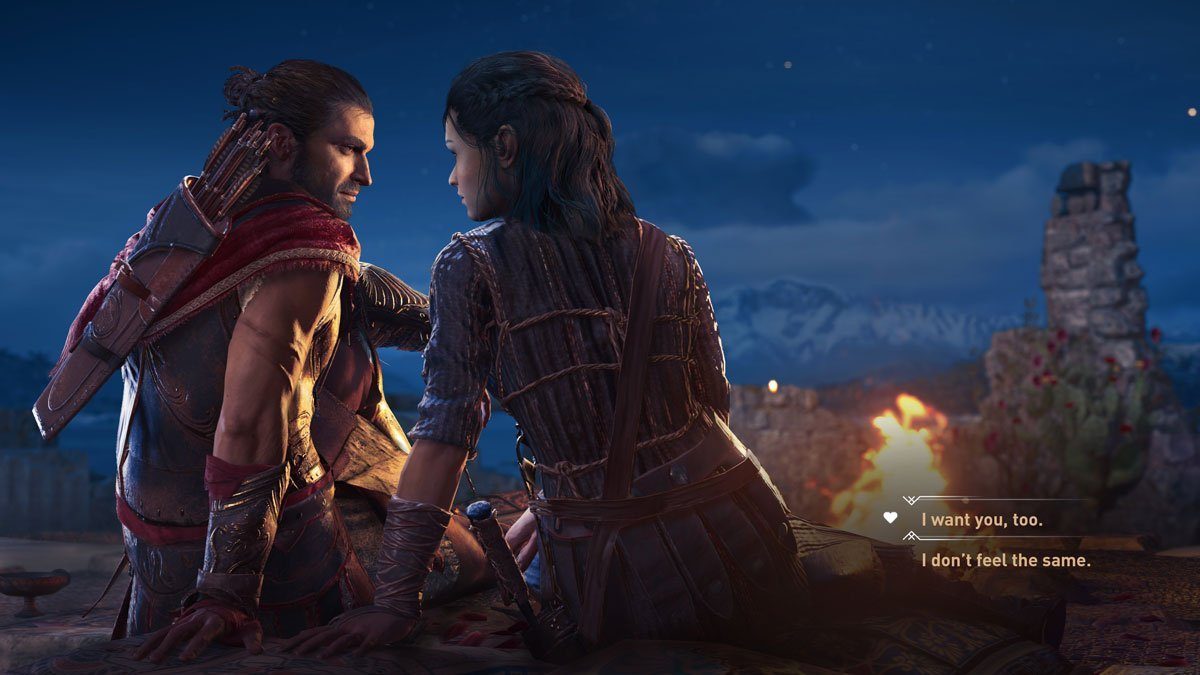 When Assassin’s Creed Odyssey launched last year, gamers and reviewers lauded the role-playing game for allowing users to engage in same sex romances. ACO allowed players to control a male or female mercenary (Alexios or Kassandra) as they make their way through the Peloponnesian War between Athens and Sparta.

In an interview with Entertainment Weekly, the game’s director Jonathan Dumont said, “Since the story is choice-driven, we never force players in romantic situations they might not be comfortable with … Players decide if they want to engage with characters romantically. I think this allows everybody to build the relationships they want, which I feel respects everybody’s roleplay style and desires.”

Melissa MacCoubrey, the game’s narrative director, followed up by saying, “We knew that if we were making a game about choice, that philosophy had to permeate throughout the entire experience and not just gameplay … Having same-sex partners is part of that ability to play your own odyssey, and it was something we knew we wanted.”

The expansion of romantic options was a natural step, one that several games are working towards. Just last year, GLAAD announced that for the first time ever, they would include an Outstanding Video Game Award in their yearly awards ceremony.

But a new DLC for the game includes a shockingly tone deaf and offensive development for queer gamers. In the latest DLC for Legacy of the First Blade, Shadow Heritage, the paid expansion features a mandatory heterosexual relationship with the son or daughter of proto-Assassin Darius. Following the mandatory relationship, a baby is born to the player’s character.

This outcome occurs regardless of whether or not the player accepts or rebuffs the character’s advances, leaving queer and asexual gamers furious. Many took to forums and social media to express their anger at the plot point.

man that assassins creed odyssey dlc is horrible for 17 reasons but mainly that it forces your lady character to be impregnated by a man??? is my understanding?? what the FUCK ubisoft

So pissed off about the assassins creed odyssey dlc,i feel so betrayed and I have such mixed feelings about doing further Kassandra art. I love her and am invested in her so much,but I dont want to endorse a game that encourages the grossness that is the dlc :(

The latest Assassins Creed odyssey DLC forces the player character regardless of sexual orientation into a straight marriage. So according to Ubisoft: fuck you if you wanted to be gay in our game that made an entire advertising campaign around being gay.

I’m lucky I have the luxury to disengage from fandoms much easier than others but, wow, the name of that trophy is fucked. “Growing Up”. Because being in a heteronormative relationship with a child is the definition of “Growing Up”.

Furthermore, once the character has the baby, they earn a “growing up” trophy/achievement, which is extra offensive for players who don’t have or want children. Oof magoof, Ubisoft really dropped the ball here. After growing concern and complaints, Dumont and Ubisoft issued an apology saying,

“Reading through player responses [to] our new DLC for Legacy of the First Blade, Shadow Heritage, we want to extend an apology to players disappointed by a relationship your character partakes in … The intention of this story was to explain how your character’s bloodline has a lasting impact on the Assassins, but looking through your responses it is clear that we missed the mark.

We have read your responses online and taken them to heart. This has been a learning experience for us. Understanding how attached you feel to your Kassandra and your Alexios is humbling and knowing we let you down is not something we take lightly. We’ll work to do better and make sure the element of player choice in Assassin’s Creed Odyssey carries through our DLC content so you can stay true to the character you have embodied throughout.”

Ubisoft has no plans to change the outcome of the DLC, only saying that future chapters will “make the character development and choice much more clear to players, and that is where they will be able to decide how they want to handle their relationship now that they have ensured that their bloodline will continue.” They will however, change the name of the “growing up” trophy in a future patch.

Considering the level of painstaking work that goes into a game like ACO, it’s wild that no one caught either of these issues before release. Where any LGBTQ staffers brought in or consulted on this DLC? It’s especially galling, considering how much Ubisoft relied on LGBTQ cred and how proudly they touted the same-sex romance options. Hopefully they’ve learned from their mistakes and will not be so cavalier in the future.