ASAPScience Guys Apologize for Sexist Imagery in Video, Recommit Themselves to Helping Women in STEM 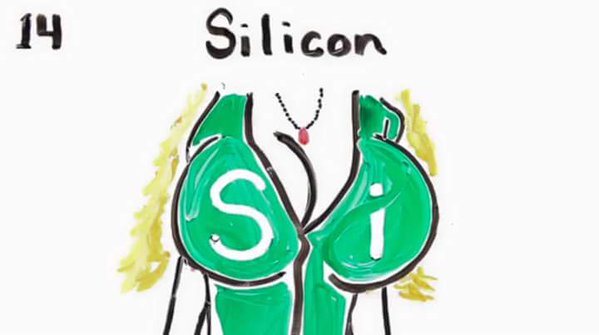 Now this is how you apologize.

ASAPScience, a Youtube channel run by Mitch Moffit and Greg Brown, has been a favorite of The Mary Sue’s for a long time–they consistently post funny, sensitive, and informative videos designed to make STEM more accessible.

Moffit and Brown also aren’t afraid to get political on their channel, and have made videos in the past addressing the hate they get as an openly gay couple. In other words, ASAPScience is reliably great in all kinds of ways, which is why it’s hard to believe that the image they chose to represent “Silicon” in their popular 2013 “Periodic Table Song” video was a woman’s well-endowed, disembodied torso. It’s even more surprising that no one called them out before now:

WTF? Why is @AsapSCIENCE using this image in an educational video about the periodic table? #STEM#YesAllWomenpic.twitter.com/xeEu0lsCHl

Well, first of all it’s not accurate b/c silicon is not the same as silicone. @BrentAtLooooop @AsapSCIENCE

And even if it were correct, there’s no need to objectify & sexualize women to illustrate an educational vid. @BrentAtLooooop @AsapSCIENCE

If Moffit and Brown had decided to ignore criticism over the video, they would have had support from many a man on Twitter:

@ElleDeeTweets @AsapSCIENCE what if they put a blokes chest as the image, would you complain theat they’re being sexist to men? Pleb.

“A joke’s a joke.” The battle cry of bigots everywhere. pic.twitter.com/1YAnmeOWbQ

.@Oliver7354 @MSatris @AsapSCIENCE Preeeeetty sure the most popular use of silicon is computer chips, bruh.

@RachelFeltman @AsapSCIENCE This is not #everydaysexism This is the equiv. of confusing Germanium with a Geranium.

But to their eternal credit, the team took the video down, publicly apologized, and re-tweeted some of the criticism leveled against them:

Thank you for pointing this out, we are always trying to become better feminists and definitely made a mistake https://t.co/LxaKGsFODu

As men in patriarchal society we were blind to the damage this image could do. pic.twitter.com/ePAuqlWqs8

We acknowledge our ignorance and are embarrassed for having never addressed this before.

We are committed to promoting #WomenInSTEM and will be editing our video.

No matter how well-meaning your intent, it’s impossible to always think outside your own lived experience (that’s something I’ve definitely struggled with at The Mary Sue). The one thing you can do is listen when members of marginalized groups point out your mistakes, and commit to learning from them. It can be hard for men to recognize that the scientific community is designed to favor them over women, and I respect ASAPScience more than ever for admitting that and pledging to do better.