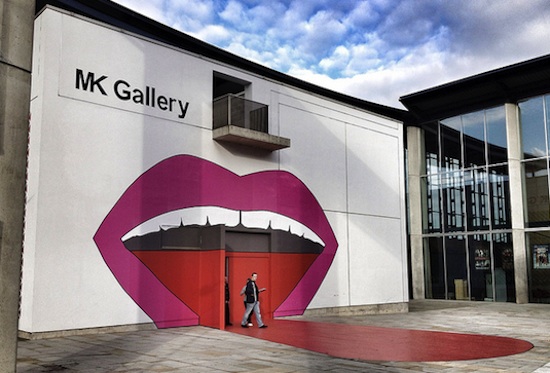 It’s never been easy to make one’s living as an artist, but these days it seems like getting your signal through all of the background noise can be even more difficult. British artist Tomas Georgeson has come up with an intriguing way of promoting his latest gallery show, reasoning that if you can’t get people excited to come to your show, maybe you can just bribe them instead. To that end, Georgeson has hidden a check for the sum total of his life savings somewhere in the gallery and declared that the person who finds it gets to keep it.

To get people talking about his latest art show at Milton Keynes Gallery, about 45 minutes outside of London, Georgeson put everything he has on the line. Somewhere in the gallery, he announced in a local paper, there is a check for 8,000 pounds, or about $12,600 — the entirety of Georgeson’s life savings. While he neglected to tell gallery managers, the ploy got the attention of London papers, and readers, and the gallery has reported a marked increase in visitors already, though how many of them are really giving the artwork their full attention and letting use of negative space and juxtaposition sink in is anyone’s guess.

Gallery employees are good enough — and concerned enough — to inform visitors that the check is not hidden under or behind any of the works on display, so standard “Hands to yourself in the art show” rules apply. There’s also a time limit on the hunt, as visitors have until the first of March to find the check, otherwise Georgeson gets to keep his money.

Georgeson is on record saying that the check is also a piece of art, and the search for it a part of the show, which… I mean, I’m no critic, so sure, I guess? We’re betting there are a lot of folks who are making the trip without aesthetic appreciation on their minds. I’m just going to go on the record, here though — if this ends up being a huge scam and there is no check, I’m honestly totally OK with that, just for the sake of seeing some guy being interviewed on British TV in a month, complaining about how he was tricked into appreciating art and it was the worst thing that ever happened to him.