Thought-Controlled Bionic Hands Now in Use 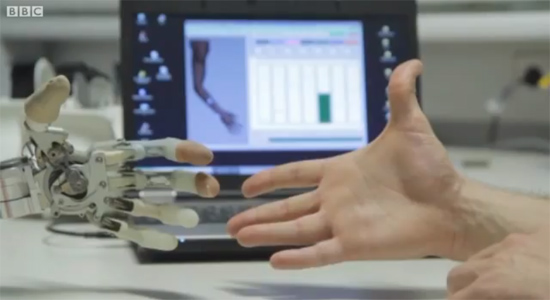 After losing the use of his hand from an accidental electrocution, 24 year old Patrick opted to be fitted with a state of the art bionic hand. Unlike older prosthetics, Patrick’s hand can open, close, and rotate using the nerve signals from his brain. He is, in effect, controlling it with his mind.

While thought-controlled devices have been seen in experiments, these new modes are ou in the wild being used in his everyday life. Another amputee, an Australian named Milo, is also using a bionic prosthetic. The BBC reports that the prosthetics, made by Otto Bock, pick up the signals from nerve’s in the forearm, using electrodes attached to the skin. Once he received his new hand, Milo said that it changed his life entirely. Hopefully this technology will continue its incredible progression, and help even of those who have lost the use of their hands.

To see a video of Patrick and his incredible prosthetic hand, read on after the break.