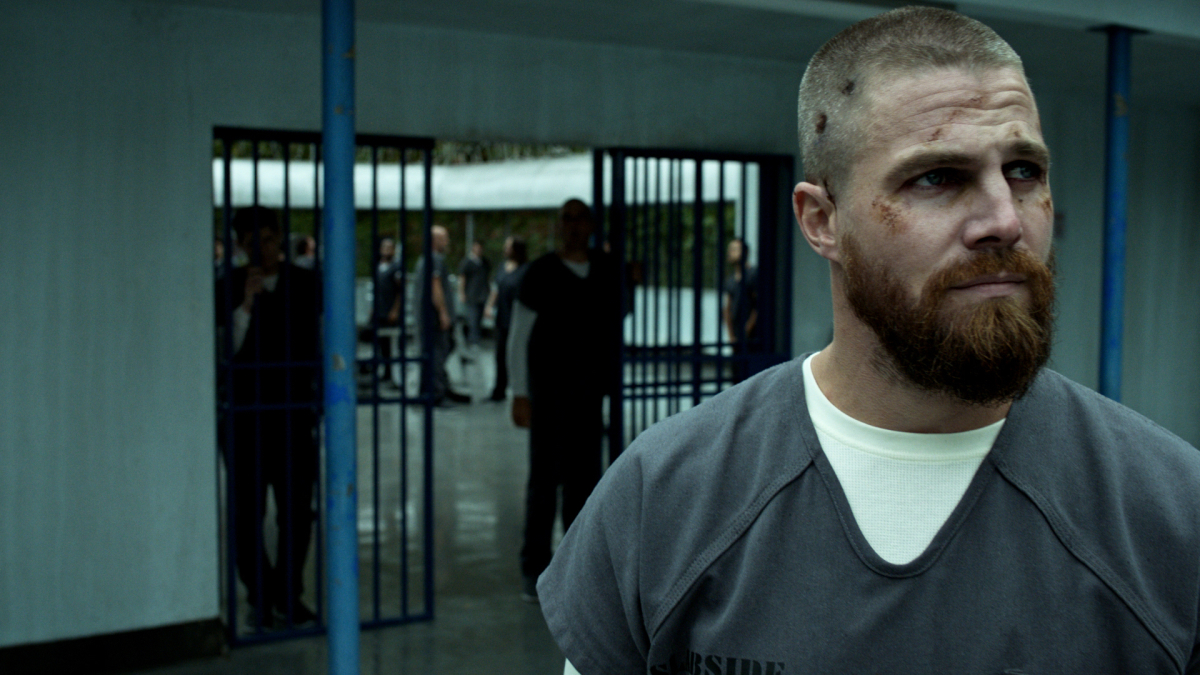 This season of Arrow has taken the series’ already awesome action and stunts to a whole new level. With Oliver Queen (Stephen Amell) in prison, things have been incredibly brutal, but what we’ve seen so far is nothing compared to the action of episode seven, “The Slabside Redemption” which airs tonight.

After last week’s triumphant takedown of Ricardo Diaz (Kirk Acevedo) things look like they’re finally getting better for the team, but at the start of this week’s adventure, Diaz neatly escapes his captors and heads into Slabside prison to take down Oliver, before the former vigilante’s release. What follows is a full hour of action, combining a tense cat-and-mouse between Oliver and Diaz, unlikely alliances, shocking betrayals, and jaw-dropping stunts.

There is no B story; there is no villain of the week—just wall-to-prison-wall ass kicking. On our recent trip to Vancouver, B.C., we talked to Amell, along with director James Bamford and fight coordinator Jeff Robinson (correction: an earlier version of this article erroneously named fight coordinator Curtis Baconnier), about how this extraordinary episode came together.

“Seven … they just turned the stunt department loose,” Amell said of the episode. “It was the shortest script that I’ve ever read, because it had so little stage direction. It was basically [Showrunner Beth Schwartz] going to James Bamford and saying, “This is the through line of what happens to Oliver from start to finish; do what you can in the time that you have. Go.’”

No one could have directed this episode but James Bamford. Bamford—also known as BamBam—has stunt credits too numerous too name, a bronze medal in karate (!) and a well-earned reputation as one of the best stunt performers and coordinators in Vancouver. Since season four of Arrow, he’s added to his resume as a director, and has been a producer on the show since 2017.

This season, he directed the Elseworlds crossover, as well as several other episodes of Arrow. He was also a correctional officer back in the day, who used his own experience working in a prison to bring veritas to the Slabside plot line this season. 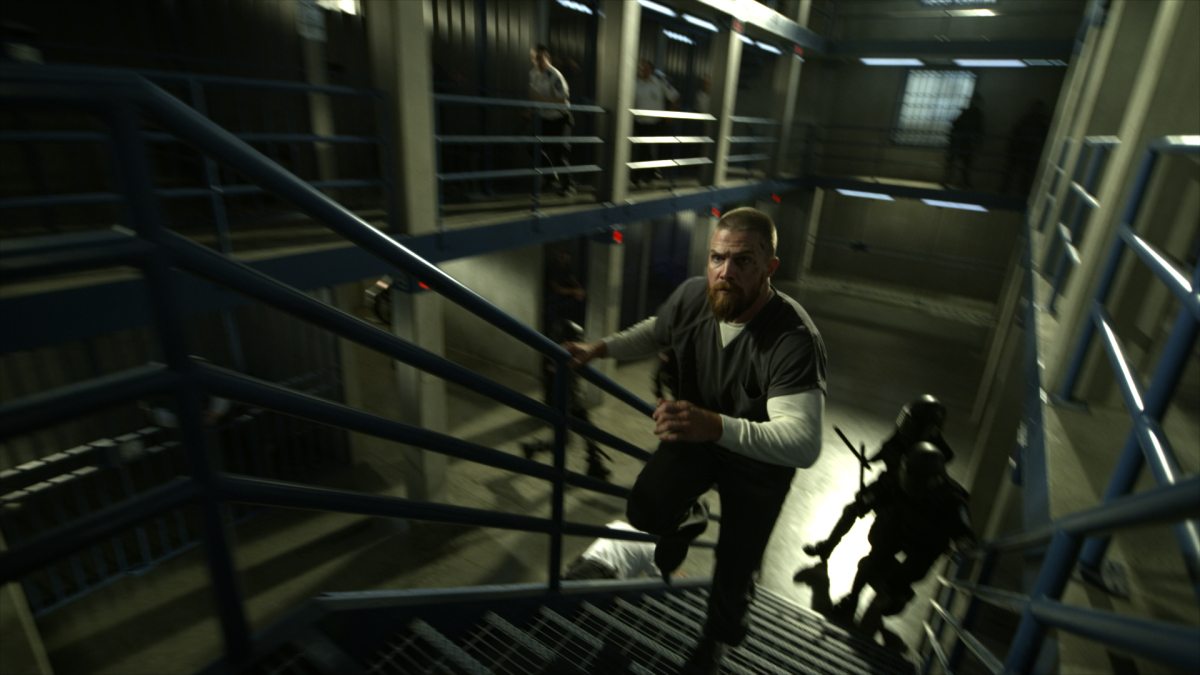 Bamford was part of the original conception for this mini action movie. “The episode was born of a conversation Mark Guggenheim and I had,” Bamford told us. At the time, Guggenheim suggested doing an episode with “three words, and the rest of it is action!” He upped the ante, suggesting the idea that the entire episode was one shot, a la Birdman.

That concept proved a tad too outside of the box for a network show, but the idea of what Bamford called “a giant oner with no words” evolved, and eventually the creatives came to the concept of “The Slabside Redemption.” The episode plays out almost in real time as one long fight between Oliver, Diaz, the guards, and the rest of the prisoners let loose (including Michael Jai White’s Ben Turner, a.k.a. Bronze Tiger). It was a true collaboration between writers, director, stunts, and actors.

One goal of the episode was to take full advantage of the multi-story Slabside prison set, which Bamford thought had been under-utilized in the top of the season. The fact that the set was built in-studio allowed fight coordinator Robinson to rehearse with his team extensively in the space before the shoot.

This came in extremely handy for the centerpiece of the episode: a single continuous shot that moves through multiple levels of the Slabside set, just aas Bamford and co. envisioned. The shot was accomplished with a technocrane, as well as hours of rehearsals by the stunt men and actors. Even within this long shot, there were many “cowboy switches,” where a stunt double will step into frame as an actor steps out, or vice versa, and stunt men and riggers doing setups out of frame while the camera was rolling.

And it’s seamless. “We’ll rehearse the whole dance, then on the day, we do multiple rehearsals with camera,” said stunt coordinator Eli Zagoudakis (correction: an earlier version of this article attributed this quote to the fight coordinator). Then there’s the actual day of shooting, where Bamford cued every stunt and movement of camera, while the crew, stuntmen, and actors went at it. 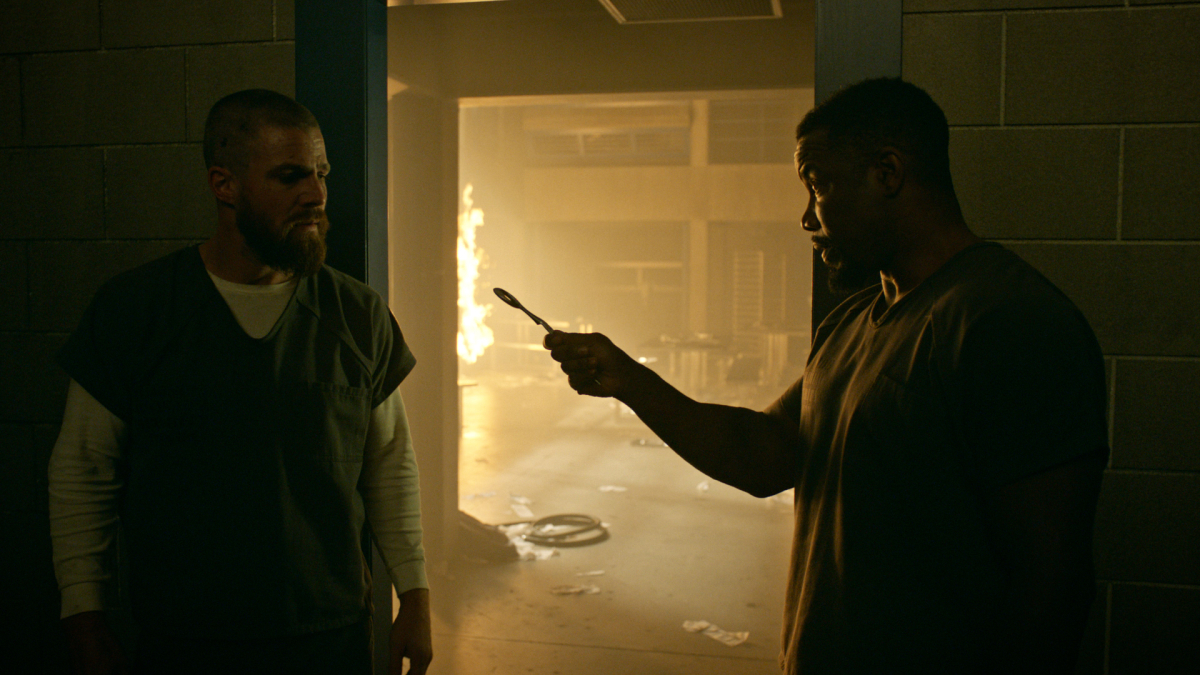 “It took about six or seven takes,” on the day, Bamford said. The “second-to-last one is the one you see in the final cut.” The stunts in this episode are so hot that a stunt man literally gets lit on fire in what Baonnier described as a “one of the coolest gags we’ve ever done.” The preparation for such a stunt was meticulous, as well. First, they set just the stunt man’s arm on fire, then more, then the full body, and eventually we see him on fire, being thrown off a ledge. And it’s awesome.

While this episode is staggering in terms of stunts, it’s just one of the many challenging and ultimately extremely entertaining risks the show has taken this season. The premiere episode saw a very naked Oliver fighting for his life in a brutal shower brawl.

“It’s not often that we get an opportunity to do something like that,” mused Amell. “This was obviously incredibly unique insofar as—we’ve had a couple fights in the history of the show where we just can’t double me. This obviously had to be me.”

Bamford incited giggles discussing how “the biggest challenge” was keeping Stephen Amell’s modesty intact and “staying on network television.” That led to a long phone call with the network about what they could and couldn’t show, but also a lot of creative filmmaking.

Another unique element this season has been the presence of The Silencer (Miranda Edwards), a member of the Longbowmen who can turn off the sound in a given area.

“Those were very difficult,” Bamford said of the noiseless fights. “It’s a really large challenge to have an action scene come off successfully without hearing a thing, because action sequences depend on the sound just as much as they depend on editing and the choreography and performance. It was a huge challenge and a gamble to actually execute that. I think it turned out really well.”

One trick to selling a silent fight? “It helps when there’s hair,” Bamford shared, a trick learned from Jackie Chan.

“The Slabside Redemption” is a great example of how good television is about collaboration between so many departments and skilled performers. That single long shot is breathtaking, and it came together thanks to the hard work of stunt people, camera men, lighting riggers, set designers, costumers, actors, post-production geniuses, and more who often go unrecognized and underappreciated.

“We’re not going to get nominated for a stunt Emmy,” Amell lamented, “but we should.”  What they will receive is major appreciation and admiration from fans, and it’s also well-deserved.