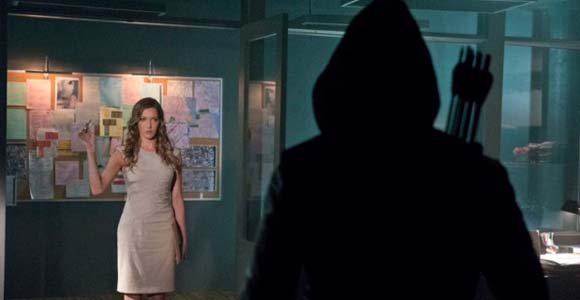 Lots of DC Comics references in this week’s episode of Arrow.

Oh, I’m sorry, this show is called Arrow, right? My mind drifted. We pick up exactly where we left off last week, Oliver is surrounded by police thanks to Laurel. Luckily for him, Black Canary shows up, uses technology to create her Canary Cry and out the window they go. “Nice mask,” says the guy who still doesn’t wear a mask, as she runs off.

Back at the Arrow Lair, the gang discusses how this woman is definitely trained, but Oliver doesn’t like another player in town. He did just get rid of a bunch, after all. Hey, Oliver, why did you go see Laurel again, wonders everyone. “I thought I could tell her I’m not the bad guy.” Oh, Ollie.

Officer Lance is having some more issues at work thanks to orders from above. Seems as though they want to steer him clear of a new murder mystery. One involving the modus operandi of one Barton Mathis, escapee from Iron Heights (thanks to the earthquake), and otherwise known as the Dollmaker (normally a Batman villain). Lance worked on the case last time and became a bit obsessed apparently. Again, back at the Arrow Lair, Oliver and Diggle are wrestling. Because of reasons. They discuss the “woman in black” putting 5 would-be rapists in the hospital. Felicity poses she’s targeting not just criminals, but misogynist criminals! Officer Lance calls Felicity to get in touch with The Hood for a meeting about the Dollmaker. They discuss a bit of the background as another woman is abducted by Mathis.

Laurel gets a visit from dad, who tells her she looks tired. Just what everyone always wants to hear. He tries getting some information about Mathis from her, says he’s digging off the books, but that just angers her more. She says he’s justifying a vendetta and he’s like, pot, meet kettle. The Hood and Lance decide to give Mathis’ lawyer a visit. The lawyer is named “Tony Daniel.” Yes, like the DC creator. He claims he doesn’t know he got out or where he is. Oliver, while swearing off killing, is still willing to hurt people and uses that in order to find out the possible location of the Dollmaker. He and Lance find an abandoned apartment, room 52 (hey, that’s a familiar number), with a phone waiting for them. Lance answers, Mathis knows it’s him and while Felicity is trying to trace the call, Lance realizes he’s caught another woman.

Splitting his focus, Oliver goes to Roy to ask about Black Canary. “Find her but don’t engage,” he tells him. So how does Roy do this? He apparently steals some booze (from his girlfriend’s club no less) to sell to another guy for information. The guy tells him to find Cindy, aka Sin, since they are best buds or something. Roy finds Sin. “Step off, Abercrombie,” she says, uttering the best line of the episode before running as soon as Roy asks about BC. He can run, too though, and we see some  nice moves from both of them…and OH MY GOD THEY’RE RUNNING TO A CLOCKTOWER!!!! Oops, Roy got knocked out. 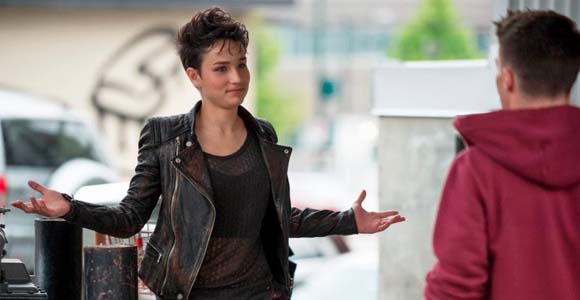 Meanwhile, the Dollmaker’s latest victim is found and the team must physically go to the forensics lab because Felicity hack into it. Lance is the one who recognizes the case-breaking clue. All the women had traces of the same skin cream on them. That’s how he chooses. After researching the product they realize it’s super high-end and for delicate complexions so obviously Felicity says she’ll be bait. But she wants to be reimbursed for buying all this expensive crap. While this is going down, The Hood and Lance have a bit of a heart to heart. “You’ve lost people too, right? Why else would you be doing this?” he says, then goes on to explain he was trying to save Sarah by saving the Dollmaker victims last time. Hey guys, this is a great talk and all but Dollmaker just grabbed Felicity. Oliver shoots him with an arrow but it’s Lance who gets to run after him first, that is, until he’s arrested for obstruction. Now it’s time for Laurel and dad to have a heart to heart.

In jail, that is. Where she complains about having to use favors she doesn’t even have to get him released. The tables are turned now that Pike and Laurel are working on the anti-vigilante task force and dad is less particular about where the help for the people of Starling City comes from. He brings up Tommy, which seems harsh but for good reason. “A guy with a bow and arrow can’t save a guy who had a building fall on top of him,” he tells her. THANK YOU, GOOD GOD! So, you know, dad says, driving the point home, YOU must feel guilty about Tommy’s death. Oh yeah, dad! Well…Stay away from the Dollmaker case! Nice comeback, Laurel.

At the club Felicity interrupts a brother/sister chat, telling Oliver to turn on the news. Channel 52, he decides. Ok, DC, I get it. Anyway, he finds out the Lance’s have been abducted by the Dollmaker. Which was inevitable. Felicity found a Metamorpho chemical truck, condemned after the quake says Diggle, that leads them to the Dollmaker’s hideout.
The Dollmaker is joking about how Laurel is too tan for his tastes when The Hood swoops in to save her. Black Canary shows up. Is awesome. We get some gymnastics stuff, some sweet staff work and then Oliver jumps back in to pin him down with arrows. But that’s not good enough for BC, she throws a weapon straight into his heart before disappearing. Yadda, yadda, yadda, Laurel has a bit emotional outpouring over Tommy. “He died because I was too stubborn,” she says, “It’s all my fault, dad!”

Meanwhile, Roy gets woken up by Sin and then taken to task a bit by Black Canary. She wants to know if “they” sent him. Who’s they? Hmm. She let’s him go when she sees a text from Thea about Laurel’s kidnapping but we get our answer. BC is about to take off mask when someone else shows up at the clocktower. This hooded man says Ra’s al Ghul has ordered her return. This was me then. BC is all, nope, not going back, this man unmasks himself and says he won’t lie for her. She’s like, ok then, I’ll just kill you. Problem solved.

In our flashbacks this week we realize Shado was pre-med, Slade is still super jealous about not having a girlfriend on the island (or perhaps he really wants Oliver?). We see there’s a really nice house on the island just before the boat we saw last time starts firing on the island itself. In a mess of a firefight both Slade and Oliver go down for the count trying to find Shado and Slade catches on fire big time. Oliver, however, wakes up in a prison cell, with others around him also locked up, on said boat. Just when you think these flashbacks are about done…

Overall I was happy with the episode. The only thing I’m dreading is the inevitable, Oliver needs to teach Black Canary an important lesson about how killing is wrong. He should know, he used to kill. Blah, blah, blah. It should be noted that in the comics, Sin is a young Chinese girl who Black Canary befriends and eventually adopts. Making her older for the show I understand, not hiring an actress of Asian decent? Hrm. Otherwise, now we’re just left to wonder if Moira really will get the death penalty and if we really care about her big secret…