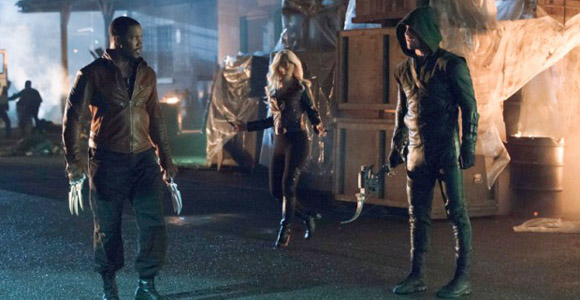 Season 2 of The CW’s Arrow returned last week, keeping pace with what we’ve come to expect from the show. But things are started to develop a bit more thanks to Episode 2. Check out our weekly recap after the jump!

Oh boy, we’re starting with a shirtless workout scene. Is there are quota for this on The CW? There probably is.

After a few minutes of sweaty Oliver, we see a FEMA truck hijacked. Roy is listening in to police activity and heads to the scene before they can. He manages to flip one of the bad guys on his bike but the other turns off and heads for Roy, causing him to flip his car. He has a car? China White then  takes out the truck on her own as Roy is accosted by the police. At Verdant, Oliver and Diggle are chatting in normal voices over loud club music. Ahh, realism. Diggle mentions Big Belly Burger got robbed and when Oliver brings up Carly he gets weird. The best part of this scene was Oliver telling Thea he had a secret entrance built into the club and her WTF? face that followed. He’s kidding. Of course. Ahem. Oh hey, your boyfriend is in jail, we should probably go see about that…

For some reason, Laurel, not the police, is questioning Roy at the police station. He had a red arrow on him when they picked him up (squee!), which she thinks is The Hood’s. Roy insists he’s just trying to make things better and adds there are others willing to do what’s right. “I’ve seen ‘her,'” he says, which Laurel conveniently ignores because she’s too busy hating The Hood. Oh look, there’s Oliver! “He totaled his car playing ‘Hood Jr.,'” Laurel tells them. “It wasn’t my car,” says Roy. Ah. They aren’t pressing charges but Oliver wants a chat with Roy. And it’s here we find out what’s happening with the FEMA trucks. The medicine FEMA is sending to the hospital is being hijacked and doctors and nurses are bailing. Huh.

Flashback to Lian Yu, just after Oliver smashed a guy to death. Slade finds a map of the islands in one of their pockets which he says looks similar to the ones he had. He tells Shado if someone doesn’t talk to Oliver, the killing will tear him up. Well, it’s a good thing you’re on a (mostly) deserted island and have plenty of time for that. Oh, and also, sex. While washing the blood off his hands, Oliver wonders, “What if I didn’t kill him only to save you?” That’s a good question. There’s some talk of the ying-yang, opposing forces, etc. and the it’s just time to get naked. Slade winds up seeing the tale end of whatever went down between the two but pretends he didn’t. He says he’s figured out where the bad men were headed. “Don’t fall to hard,” he warns, “she’s a distraction.” Read: Why do YOU get the girl, you big jerk?

At the Glades Memorial Hospital, Oliver and Diggle see how bad the conditions really are. They meet Sebastian Blood (True Blood’s Kevin Alejandro) talking to the press. Oliver, you should probably get out…too late. Blood directs his focus to Oliver, “where was your family’s concerns when they ordered the construction of the earthquake machine?” Yup, predictable. Oliver swears he will help, Blood says his money isn’t good enough.

At the Queen’s Industry offices, Felicity quits being Oliver’s new executive assistant? Wait, what? “I need a girl Wednesday,” he says. “It’s FRIDAY,” she corrects. She went to MIT goddammit! But Oliver explains she needs a secret identity, something that will allow her to be near him for when real business calls. To which Diggle adds, “My secret identity is his black driver,” and I lose it completely. Ok, fine, but I will never get you coffee she says.

Turns out, it’s time to suit up right now because FEMA is shipping medical grade opiates again soon. There’s another attack on the trucks, even before they get on the road, but Oliver stops them. China White intercepts once again but this time she brought backup. Nerds know him as Michael Jai White, comic fans will know him as Bronze Tiger, but I’m worried everyone else is going to call him “Black Wolverine” because they neglected to introduce him at all. Anyway, he’s badass, stopping Oliver’s arrows like it’s no problem, and then the police show up with Laurel and Oliver uses his grappling hook arrow to get away. Weeeeeeeee! 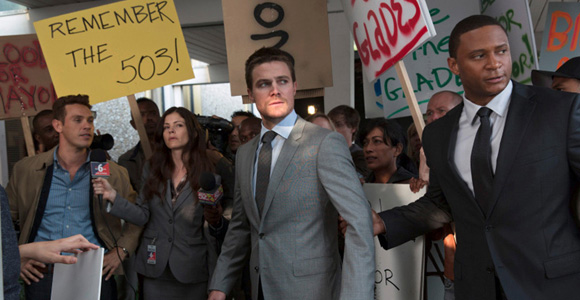 Back at the Arrow base, Oliver is sewing himself up and Felicity is fed up with his self-involvement. Turns out Diggle and Carly couldn’t make their relationship work. Mostly because Diggle is still super-obsessed with Deadshot still being out there. Guess what, rich boy, you’re not the only one having trouble reconciling two sides of himself. Upstairs, Roy is sweeping up and Thea isn’t about to let him getting arrested go. What does she do instead? She fires him. Sort of. She gives him a choice: two week’s severance pay or the rock Oliver gave her. It’s a Buddhist symbol representing reconnecting, she explains. Either rip up the check and stay with her, or leave forever.

In order to fix his PR problem as well as help the Glades, Oliver invited Blood for a meeting. “My mother was involved in something unspeakable,” he says, but “I’m not your enemy.” The two agree to hold a benefit but Blood insists Oliver be the face of change. Blood apologizes for throwing him to the reporter wolvers, “Sometimes my emotions get the better of me.” At the Glades Memorial Hospital benefit, Blood talks to Laurel who is not happy with him for messing with Oliver. He’s giving him a chance until he’s late (for good reason, another FEMA truck is being taken) and decides he’s going to screw him over in the media again. “You’re just going to crucify him again?” asks Laurel. “Crucifixion has such a bad reputation,” he replies. Uh.

Laurel gets a visit from the vigilante and asks him to pull back your hood. It would do him a lot of good as far as she’s concerned. Well, maybe not. She tells him she saw him running away from Tommy’s death scene. The Hood didn’t save him because he was “too busy fighting a meaningless dual” and therefor he’s now a bad guy in her eyes. Frustrating logic is frustrating.

China White has the next FEMA truck already when Oliver shows up. The police are on the hunt for him but Felicity is feeding them old surveillance. Diggle makes the biggest political statement of the night by saying, “healthcare has enough problems without you punks,” while fighting China’s crew. Action, action, action, China calls Oliver the Emerald Archer (squee!) and he finally captures her. She tells him he’ll never be a hero and he’s all, “meh.”

In one last flashback, the group finds a secret caved with a few skeletons. Turns out they’re from the Japanese imperial army and have been there since World War II. They have no idea what this means but Oliver finds the Hosen he gave to Thea on one of the bodies.

At Queen Industries, Oliver apologizes for not being there for Diggle to which he replies they are “dangerously close to hug territory,” and makes his exit. And Felicity made him coffee! “One,” she says. Roy gets his own visit from The Hood who tells him to stop. He says no and Oliver decides to let him help, without fighting. He wants intel. Be my “eyes and ears in the Glades,” he suggests. Yah! Team-up! Roy gives the hosen back to Thea and I’m pretty sure she won’t like his little loophole. At the district attorney’s office, Laurel gets another visit from the Hood but this time, she’s ready. Even though The Hood explains he would have given his life for Tommy, it’s not good enough. It’s a trap! Oliver is now surrounded by cops with guns on him.

What I liked most about this episode was the team building. Not just Felicity and Diggle cementing their place in Oliver’s life but him actually bringing Roy into the fold. I look forward to how that goes even further when Black Canary shows up next week!!!!!!!!!!!!!!!!