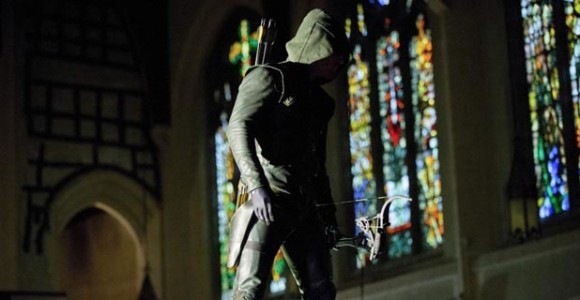 Welcome to our brand new Arrow recaps, everyone! Oliver Queen was back last night in the Season 2 premiere, but was Arrow?

After the devastating season finale, Oliver apparently ran away. We pick up with Felicity and Diggle looking for Oliver on the island Lian Yu of all places. They parachute out of a rickety plane, much to Felicity’s dismay, and pass by Deathstroke’s mask with the arrow through it (did that happen last season or is this a recent occurrence?) on their way into the jungle. It’s at this point I’m thinking to myself, “they don’t look terribly prepared for this kind of mission,” when Felicity steps on a land mine. Just when Diggle is about to try and disarm it, Feral Oliver says it’s not possible and swoops down like Tarzan to save her.

Well that was certainly a way to open a show.

Oliver has set up shop in his old home, the fallen plane, and says he actually is happy to see his old pals, even if his face remains unchanged. But he’s still not coming back to Starling City. Diggle fills the audience in on what we need to know – Moira is in prison, Thea is on her own, and the family business is ripe for a takeover. Ok, he guesses he’ll come back. But not before we see a flashback to five years ago on the island and Oliver learning to fight with Slade. Oliver and Shado are obviously in a relationship but it’s soon we find out there are other people on the island. You know, after they killed the other people who were on the island.

Oliver, Felicity, and Diggle are magically back in Starling City and we get a good look at the leveled Glades. I spot a “Vote for Blood” and hope they might mean Jason Blood from DC Comics. At the club, Thea and Roy are making out hardcore when she realizes he’s been acting as a vigilante while she’s not around. Oliver shows up and Thea apparently thought he was in Europe this whole time. No calls? No emails? It was almost like you were back on the island, she says. Yeaaaah. Oh, and apparently this is Thea’s club now, even though she’s not old enough to drink and has zero experience running a business. Oliver is basically like, “Ok, we’ll roll with it,” and tries broaching the subject of their mother, currently serving time in Iron Heights. Thea refuses to see her. As an aside, we hear a vague news report about Central City’s Star Labs and their particle accelerator. Could this be our first Flash reference?

At a political fundraiser, Dylan Bruce from BBC America’s Orphan Black is trying to sweet talk the mayor and we learn Laurel has joined district attorney’s office. And then some vigilantes show up, vaguely using Arrow’s MO. “You have failed this city,” they shout, before killing the mayor and firing machine guns all over the place. It’s at this point, Laurel once again gets to kick some butt, which she forgot she could do most of last season, but hey, we won’t be picky. Detective Lance arrives on the scene and we discover he’s now just “Officer Lance,” the vigilantes are calling themselves “The Hoods,” and they are acting as Robin Hoods, redistributing funds from the rich to those in the Glades. Oliver shows up soon after and tries to have a heart-to-heart with Laurel. “I made a mistake when I slept with you,” she says. That was not what I was expecting. But then the two bond over shared betrayals and dead loved ones and I’m not sure where they’re going with this to be honest.

It’s at this point we’re introduced to the VP of Queen Industries’ rival company, Isabel Rochev, played by the ever-wonderfully Summer Glau. There’s barely an introduction before she starts throwing some sick burns at Oliver. But then The Hoods show up at the office, annoyed Oliver was getting more press coverage than them. Yup, you’re totally in this for the right reasons, dudes. Oh no, someone save the bagels! I mean, the innocent people in the room. Felicity gets into the action for a few seconds but Oliver needs to grab her and Tarzan it out the window to save her again. Diggle is really annoyed because he knows Oliver could have easily taken them all out. “You’re not considering the body count,” says Oliver. “Since when do you care,” asks Felicity. Since Tommy, duh. Oliver points out he called him a murderer before he died and I must point out once again, “YOU ARE A MURDERER OLIVER!” Just because you’re killing bad guys doesn’t mean you get a pass. 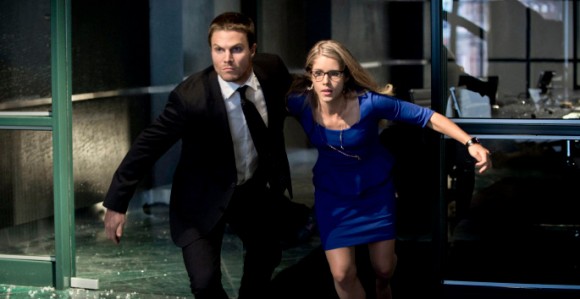 Thea and Roy discuss her mother a bit more and she insists she’s not going to go visit her in prison. “It’s the only way I know how to hurt her,” she tells him. To which he responds, “How much is it hurting you?” POINT TAKEN. But Oliver goes to visit mom first and Moira says she will apologize for the rest of her life. Back at the club, The Hoods show up for Oliver, Roy does his thing fairly well until one of their hands pops off. Uh, what? The guy looks to have some missing fingers but before we can figure out what’s going on, they take Thea. Upon hearing she’s been kidnapped, Oliver is all, “I’m just gonna check something downstairs…”

And cue new secret lair. Felicity has made a few improvements which we’ll get to in due time but for now they do a little research and find out one of the Hoods is an ex-marine who had to have an amputation thanks to the earthquake and who also saw his wife die. And then a quick flashback to the island again where Shado has been taken captive by unnamed thugs. They ask her where the graves are? But before Slade can devise a sensible play, Oliver runs in blind and kills one of the men. Brutally. Still not a murderer though. Nope.

Meanwhile, the kidnapped Thea is being held in the church. “She’s seen our faces!” shout The Hoods. Then why did you take your masks off!? Idiots. My mother didn’t kill anyone, she insists, Malcolm Merlyn did. Finally, the real Hood shows up, shoots our main bad guy in the chest but saves him from a death fall. The man calls him a killer so of course he saves him. Because this is what we call a turning point.

At a cemetery, Oliver is visiting Tommy’s grave and Laurel shows up. It’s all still extremely weird between them but we find out she has a new vendetta against the Hood and is intent on helping her boss catch him. Thea finally goes to visit mom in prison and it’s actually a really nice scene between the two. Moira is like” Are you still dating that boy?” and Thea is like, “Moooooom, I almost died last night.” But it all ends well.

Back at the company, Isabel is bragging about owning 50% of the shares and Oliver is like, “Not so fast, lady.” That’s when Walter shows up, announces he’s now the chief financial officer at Starling City Bank, and he’s given Oliver the money to have equal holdings. Roy and Thea have a phone chat where he says he won’t be doing any vigilante work then does some vigilante work. But then! BLACK CANARY SHOWS UP!!!! And beats up the thugs for him. Awesome.

So, the gang is back together. Oliver wants to honor Tommy. Diggle says the city needs a hero rather than a vigilante and they all agree that means distancing himself from “The Hoods.” “What do you want to be called,” asks Felicity as Oliver stares meaningfully at a green arrow. AAAaaand scene.

I thought it was a great season opener and I’m glad we don’t have to waste more than one episode on Oliver trying not to be a hero. But something tells me his anger issues (read: murderous tendencies) will rear their head at some point. Now let’s see more of that Black Canary.

What did you think of the Arrow season premiere?