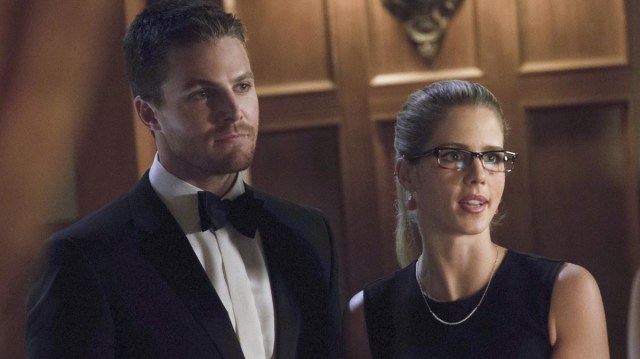 We’re still a ways off from Arrow Season 3 on The CW, but everyone is already hard at work planning some fantastic superhero stories. Find out what’s being said about what and who we can expect to see next time around. Vague spoilers ahead.

TV Guide made sure to let us know Caity Lotz, aka Black Canary, will certainly be back on Arrow: “Even though our favorite Canary passed off her leather jacket to Laurel and disappeared into the ether with Nyssa, I hear Sara will be back for the Season 3 premiere.”

“But what does that mean for Oliver’s love life?,” this writer asked dramatically. Well, Andrew Kreisberg spoke with TV Guide and mentioned Oliver and Felicity would be going on a date in the premiere.

“When you see the premiere and you see how things shake out, you’ll come to a very sympathetic understanding of both of their positions,” he said, also mentioning the newly cast Brandon Routh as Ray Palmer would be a “big foil” to Oliver. “A lot of what’s funny about Felicity and Oliver is that he’s so straight and she’s the funny one. With Brandon, you get somebody who’s as tall, square-jawed and handsome as he is [and] he’s a really funny comedian. He and Felicity can have that verbal repartee that we haven’t typically had on the show. As much as the show is getting darker, it’s gotten a lot funnier. It’s just such a different energy. He and Felicity are really cute together.”

And what about Season 3’s villain? Kreisberg told TV Guide:

You seemed to be setting the stage for Ra’s al Ghul to be the villain in Season 3. Is he actually the villain? Can you say anything about the new villain?

Kreisberg: It’s big. I can say that he’s big and he’s bad. We’re still figuring that stuff out. As far as the Big Bad, there will be a Big Bad. Even last year, everybody was a subset of Slade’s (Manu Bennett). Slade was the Big Bad. We will meet other villains along the way, as always. We’ll have recurring villains and new villains we’re starting with this year and people who are coming back from the previous two seasons.

But more importantly than love interests and villains, we want to know how many of the women on Arrow are going to be stepping up this year.

“Laurel is still just an attorney. She’s an attorney with a jacket,” Kreisberg hilariously described that string left hanging from the Season 2 finale. But, he continued, “I think Katie Cassidy fans are going to be very, very excited about her trajectory this year.”

Actor Colton Haynes, who plays Roy Harper on the show, spoke with TV Fantatic about Willa Holland’s Thea. “We’re going to see a frickin’ bad ass Thea coming. We’re also going to see a bad ass Laurel. Her guns are… if you see the pictures she’s posting on Instagram. She’s kicking ass. She’s just shredding it.” That certainly gets us excited and jives with what we guessed after the finale as well as with what Kreisberg told TV Guide:

By the way, while I’m in San Diego for this week at Comic-Con, I’ll be getting to interview the actors and creators of the show. If you have any burning questions you’d like me to ask, drop them in the comments and I’ll see what I can do. :)