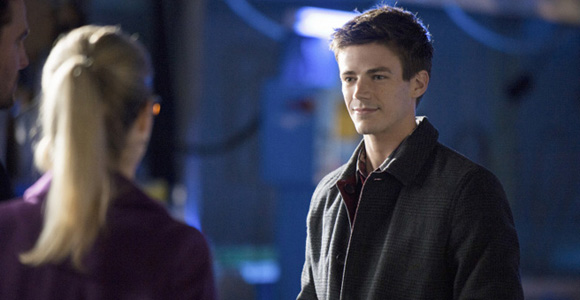 Glee actor Grant Gustin debuts as Barry Allen tomorrow on The CW’s Arrow and I know a lot of folks are interested to see what they’ll do with him. Hit the jump to find out what the creators had to say about this latest incarnation of the classic character plus our first clip of Gustin in the role, and some details on a possible return for Doctor Who’s Alex Kingston.

Executive producer Andrew Kreisberg told reporters Arrow’s Barry is “outgoing and funny,” but also “sort of a squeaky wheel.” That lines up more with Wally West than Barry Allen in my mind, but then again, Arrow does take liberties with its DC characters. For instance, Gustin’s casting skews a bit younger than comic readers are used to. The Hollywood Reporter writes:

“It is an elephant in the room, so we addressed it,” Kreisberg said, acknowledging executive producer Greg Berlanti‘s suggestion that lines of dialogue be added about Gustin’s younger look. “The thing that was important to us was that he really should be a contrast to Oliver and to Stephen. Stephen is the traditional square-jawed, muscle-bound hero. That works really well, because he needs all that. One of the things about Flash is he’s a random guy who gets struck by lightning. He needs the bolt of lightning to be a hero in a way Stephen doesn’t.”

Berlanti also mentioned we’re likely to hear more about “The Flash” after his two-episode arc, much in the way we heard about Star Labs this season. So I guess that means more Channel 52 News reports. Here’s a brief clip from tomorrow’s episode.

As for the Kingston news, TV Line is reporting the actress will be reprising her role as Dinah Lance, mother to Laurel and Sara and ex-wife to Quentin, in episode 14 this season. That should be interesting…