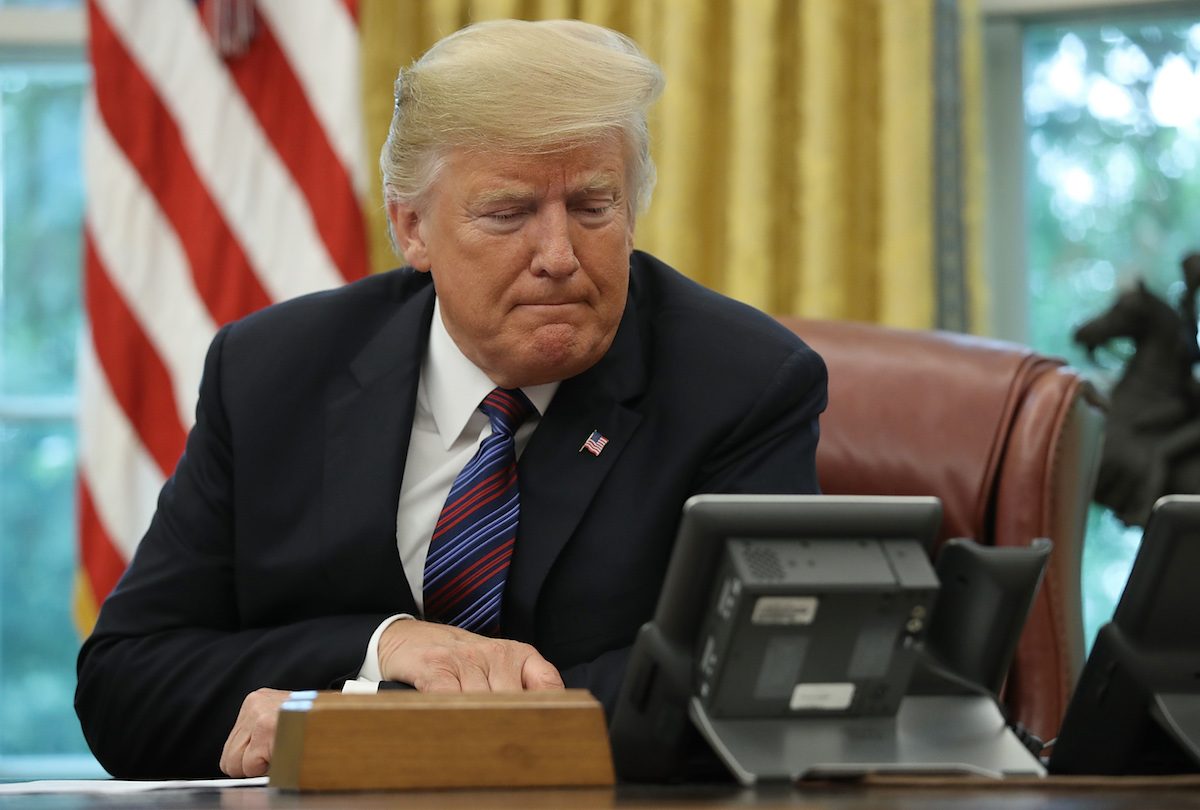 In a welcome portent of Donald Trump’s future irrelevancy, Arizona’s Republican Governor Doug Ducey sent the president to voicemail while certifying the election results. In the now-viral video, you can see Ducey ignoring the call as his “Hail to the Chief” ringtone is quickly silenced. And while you may think that it’s just a funny ringtone (i.e. setting your mother-in-law’s calls to the Imperial March), Ducey himself bragged about the ringtone while promoting his close relationship with Trump. Or formerly close, one can assume.

Arizona’s Republican Gov. Doug Ducey appeared to ignore a phone call from the White House on Monday while certifying Joe Biden’s victory in the state.

Ducey said earlier this year that his phone plays “Hail To The Chief” when the White House calls him https://t.co/GH5EGbg9W5 pic.twitter.com/QdUDgwZdI8

The certification confirms what everyone has known for a few weeks: Joe Biden won Arizona, and Mark Kelly beat incumbent Martha McSally. Kelly is due to be sworn into the Senate tomorrow, giving Democrats another seat. The facts are indisputable, despite Trump’s repeated attempts to undermine the integrity of the election and the will of the voters.

Trump angrily tweeted about the governor, writing, “Why is he rushing to put a Democrat in office, especially when so many horrible things concerning voter fraud are being revealed at the hearing going on right now. @OANN What is going on with @dougducey? Republicans will long remember!”

Trump’s focus (or what little of it he has) on Ducey is of course split between the other Republican governors who are in the process of certifying their elections for Joe Biden. Trump’s lawyer/Hair in a Can spokesman Rudy Giuliani and his clown car of lawyers were in Arizona pleading Trump’s case, which contains no facts or evidence of any sort of election fraud.

Many took to social media to troll Trump for getting sent to voicemail:

What is a loser to do when even his sycophants won’t take his call anymore? https://t.co/yD2pz3fsRo

About time that our elected officials think for themselves. Thank you @dougducey https://t.co/Gx414mcMdU

“Ducey told reporters whenever the president called, his phone played “Hail to the Chief…” As the governor signed the official results, his cell phone rang to life. It was playing “Hail to the Chief.” Ducey…continued signing. An iconic moment?”https://t.co/XOdTVpqb9p

LET’S GIVE THEM SOME SPACE Is the Ducey-Trump bromance over? This is a really bad public breakup. pic.twitter.com/nn3C3cxK3p

AZ Gov. Doug Ducey (R) certified Biden’s win today AS TRUMP OR PENCE WAS CALLING HIS CELL, that he briefly looked at & set face down on the table to finish signing election results. 😂

Doug Ducey sending Agolf Twitler to voicemail as he certifies Biden’s win in Arizona is lovely to watch. https://t.co/ogtc5TSwZ8

Ducey is getting blowback not just from Trump and Giuliani, but from Trump’s diehard conspiracy theorist supporters, including Dr. Kelli Ward, the chairwoman of the Arizona GOP. Ward tweeted to Ducey, “#STHU [shut the hell up] #ElectionIntegrity is missing in Arizona. Period.”

Ducey also had his defenders, like Arizona Secretary of State Katie Hobbs.

Like I’ve said from the beginning: We ran this election according to Arizona law, despite what the conspiracy theorists would tell you.

Governor Ducey did his job today. Nobody deserves to be attacked for fulfilling their oath of office. https://t.co/y4XpPEC90P

Ducey replied with a lengthy Twitter thread about Arizona’s secure elections, saying “The problems that exist in other states simply don’t apply here. I’ve also said all along, I’m going to follow the law.”

That’s the law. I’ve sworn an oath to uphold it, and I take my responsibility seriously. 9/9