Arduino GRANDE is a Giant, Fully-Functional Microcontroller | The Mary Sue 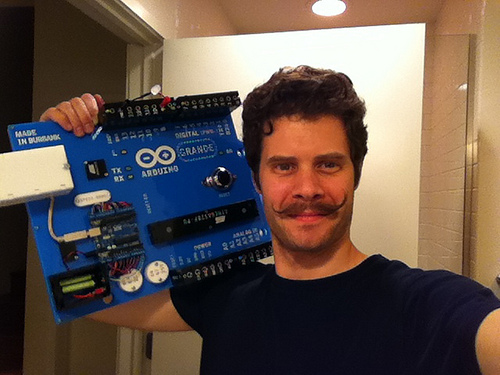 You can use Arduinos to do a lot of cool things, a lot of cool things that we like to cover on Geekosystem. But what about using an arduino as a means to its own end? John Edgar Park, writer for MAKE magazine, has an answer for that; you can make a really big Arduino, one that’s six times the size of traditional microcontrollers. Enter the Arduino GRANDE, a macrocontroller, if you will.

Park’s fully functional Arduino GRANDE is due to be shown off at the upcoming Bay Area edition of Maker Faire where those attending will get a chance to see how the behemoth was designed with 3D modeling software and then brought to life through the miracle of laser-cutting. Hopefully we’ll get to see it implemented in some kind of wild build one of these days. I’m sure someone out there must be able to come up with something that could justify its size.