Just when you though it was safe to get back in the water. 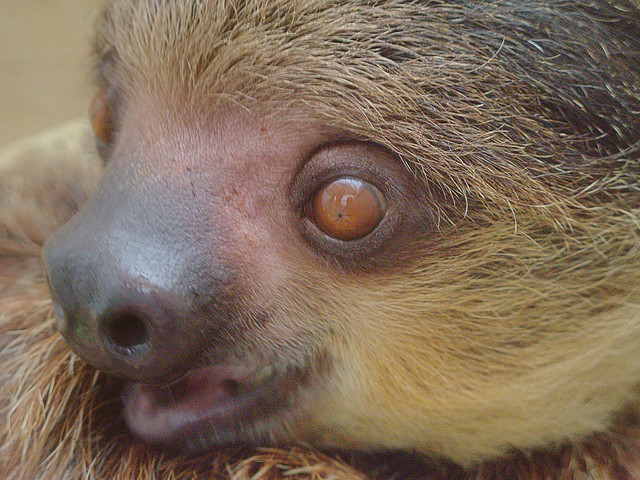 Sometimes I resent evolution. A study published this week in the Proceedings of Royal Society B. claims that millions of years ago, sloths were six feet long and spent most of  their lives in the water. Thank you, survival of the fittest, for depriving me of a world full of underwater sloth rides and hypnotically slow games of beach volleyball.

Researchers have long hypothesized that the ancient sloths who lived eight or nine million years ago would have needed to search for food elsewhere than land. Thalassocnus fossils are found chiefly along the shores of Peru, which at that time, was a desert with little vegetation for sloths to grub on. 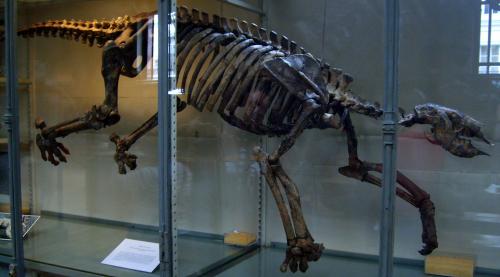 However, physical characteristics also found in modern day sloths (such as their big bellies) would have made the giant cuties too buoyant to dive deeply for food.

To see if the ancient slots evolved to counteract their natural lack of ability as sea-dwellers, researchers from the Sorbonne Universités borrowed fossils (I tried that once. No dice) from museums to perform PT scans, revealing that the bone density of ancient sloths increased by over 20% in a span of 3 million years.

Unlike modern day sloths or even humans, ancient sloth bones eventually evolved without hollow pockets and made their skeletons denser, which allowed them to dive deeper and longer. Explains head study author Eli Amson to National Geographic, “Think about a scuba diver who has a weight belt. It allows them to sink.”

Greg McDonald, a senior curator of Natural History for the U.S. National park service, explained to National Geographic that dense bones weren’t the only bizarre adaptation seen in giant aquatic sloths. Thalassocnus were a whopping 3 meters long, and 1 meter of that evolved to be a stabilizing tail “reminiscent of a platypus tail or a beaver tail.”

Although the bone density of ancient sloths was similar to that of aquatic mammals like modern manatees, McDonald believes that the sloths spent slightly less time in the water than other dense-boned mammals, returning to the prehistoric shores to sunbathe.

“And what a sight that would have been, to see six-foot sloths lazing about a beach,” says McDonald.  “Even by sloth standards, it’s a weird animal.” This all sounds pretty weird to me to, but I’m glad an expert weighed in to confirm.

Unfortunately for my fantasies of gliding across the water on the back of a trusty sloth steed, when the Isthmus of Panama closed and prevented warm water from reaching Peru, the sloth’s food sources likely died out, taking the gentle giants with them.

It makes sense that Thalassocnus wasn’t ultimately able to adapt fast enough to the demands of their changing environment—speed has never been sloths’ strong suit. I, for one, hope aquatic sloths are still out there, somewhere, lounging on a secluded beach while Megaladon frolic nearby.

Dreams, at least, don’t have to go extinct.