Everything You Ever Wanted To Know About Sloth Poop

Sloths are adorable, even at their grossest. 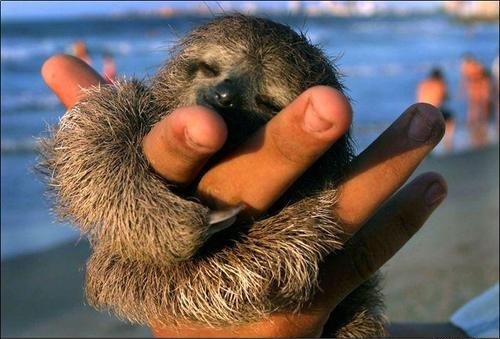 It’s not surprising to hear that sloths are too chill to poop more than once a week. But why do they do it on the forest floor? Ecologists are studying the poop pilgrimage of the three-toed sloth, and the science behind it is a little weirder than what we would expect from such cute little squirts.

Three-toed sloths make their way weekly from their homes in the jungle’s canopy to the base of a tree, where they dig a hole to defecate in before slowly climbing back. Their earth-bound bathroom breaks are probably good news for hikers, but they don’t make as much sense for the sloths themselves.

Being on the ground exposes sloths to predators (more than half of sloth fatalities occur while on the ground and presumably defecating, which is a shitty way to go,) and an inefficient use of their calories (the short trip uses up about eight percent of their daily intake.)

Ecologist Jonathan Pauli and his team conducted a recent study (now published in The Proceeding of The Royal Society of Biological Sciences) on three-toed sloths’ bathroom behavior, and believe it all comes down to symbiosis.

Scientists already knew that sloth’ fur is more complex than it appears, containing moths and algae. After analyzing a sample of three-toed sloth poop, Pauli and his team realized that the fecal matter was full of moth eggs. Presumably, once the sloths reach the ground the moths in its fur get off their ride, lay their young in the sloth’s poop, then leave them there to feed. Ah, nature, so full of miracles.

But what’s in it for the sloths?  “Given the heightened risk and energetic cost for a sloth to defecate on the forest floor, one would expect it to be an important fitness-enhancing behavior,” explains Pauli.

To figure out how the moth-sloth relationship benefited the host, Pauli and his team collected samples of three-toed sloth hair from Costa Rice and tested the nitrogen and phosphorous content in the fur to determine the amount of algae present. They then used syringes and tubes to suck out and examine the contents of sloth’s forestomachs, which sounds absolutely horrifying.

Pauli noted that the more moths a sloth had, the more algae was present in their fur — and some sloths even had algae in their forestomachs. The researchers believe that in return for having a supply of poop to feed their babies, moths help algae in the sloth’s fur grow. This may be accomplished by a fungus in the sloth’s fur breaking down dead moth’s bodies for nutrients.

The team hypothesizes that sloths then eat the algae, which contains five times the amount of fat than their regular diet and  “could help to explain why three-toed sloths are difficult to keep well-nourished in sanitized captive facilities,” as the study explains.

So basically, sloths have a lot more going on than we gave them credit for! Just watch this video and think about the incredible/gross ecosystem these sloths have on their backs (also, look out for the little guy in a onesie.)

So yeah, their relationship with moths may be complicated, but just look at that little smile! Have you ever known that kind of bliss?

(via io9, image via miranda)