Time for some heartbreaking disappointment, courtesy of April Fools’ Day: Hot Topic is not actually releasing an entire line of clothing inspired by The Golden Girls. If you wanted a sparkly tube top with a jewel-toned, oversized jacket draped over your shoulders, guess you’ll have to go to a thrift store. What about that massive pair of square-lens glasses? Ask your grandparents to remember you when they bequeath their belongings, because they just don’t make ’em like that anymore.

I legitimately like jewel tones and sparkles — and The Golden Girls, because I am a human being — so this one made me a little sad. As far as jokes go, though, it’s pretty great because it doesn’t feel like it’s making fun of Golden Girls so much as celebrating the charming fashions of the day.

Fashion jokes are tricky to land, because taste is subjective, and making fun of people’s clothing choices (which are deeply personal, and often a reflection of the person themselves) doesn’t usually strike me as funny. That’s why this next April Fools’ joke (if it even is a joke?) feel a bit flat with me: Mark Zuckerberg for H&M. 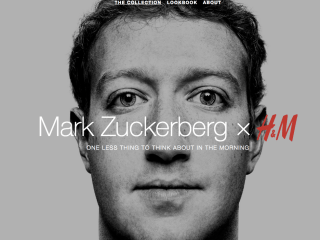 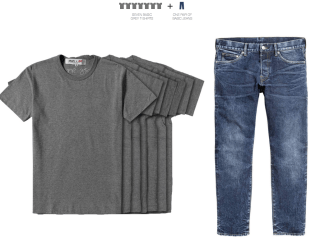 Facebook’s Mark Zuckerberg gained some notoriety and mockery in the world of fashion last year when he posted a Facebook photo of his wardrobe: it’s all gray T-shirts, over and over and over. I can’t believe I’m defending a bazillionaire who owns a company that does tons of stuff I don’t like, but here we are. I don’t think the gray T-shirts are that bad, okay?

It’s cool that Zuck’s willing to laugh at himself; his original Facebook post about his love of gray Ts is clearly a self-effacing joke, and this campaign with H&M is another one along the same lines. But the idea of packaging T-shirts and jeans together as a product concept … honestly, it’s not bad, so it’s not quite funny or bizarre enough to work. It seems like an actual campaign that could happen in real life.

That’s probably because something like this did happen in real life: Uri Minkoff designed an entire fashion line inspired by Zuckerberg’s “normcore” style. Simplistic doesn’t always mean bad or even boring. And I swear I’m not saying that just because I happen to be wearing a gray T-shirt right now.

Last but not least when it comes to fashion-related April Fools’ goofs, the entirety of GQ‘s website has been made over with pictures of George Costanza. This joke is an example of something that is bizarre enough to work for me.