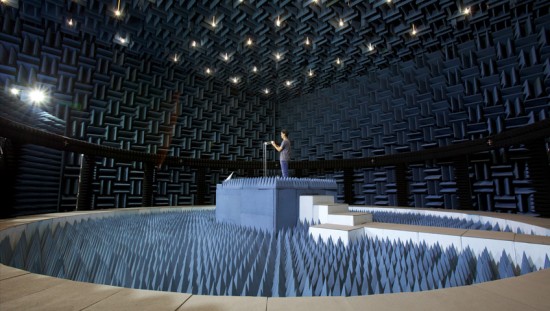 During Apple‘s press conference on Friday, Steve Jobs explained that the company had conducted thorough testing of the iPhone 4‘s antenna in the company’s secret lab. Following the presser, 11 journalists were invited to tour the once-hidden “Infinite Loop labs,” which Apple has invested $100 million into for antenna design and testing. The tour was notably led by senior Apple engineer Ruben Caballero, who had reportedly warned Jobs about the antenna problem early in the iPhone 4’s development (Jobs called the allegation “total bullshit”).

According to Macworld–who were among the lucky few invitees–an Apple PR representative told them, “The existence of this lab used to be secret. Now it’s not.” Indeed, Apple had presented images of its facilities at the conference, and later posted a page about its state-of-the-art testing environment, the implication being that no other facility would yield results as accurate. 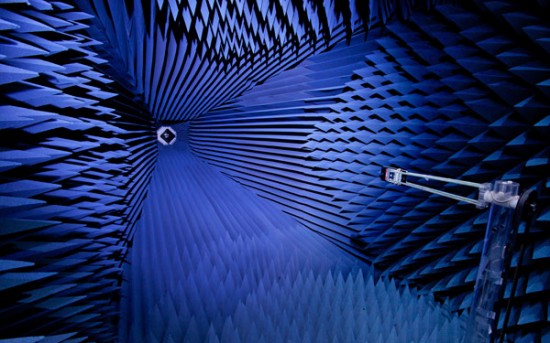 The lab consists of 17 anechoic (antenna characterization) chambers which are connected to “sophisticated equipment that simulates cellular base stations, Wi-Fi networks, Bluetooth devices — even GPS satellites,” according to Apple’s website.

Macworld reports on the interior of these futuristic rooms:

Caballero would occasionally step into a chamber … and the moment he entered the chamber his voice became nearly inaudible, due to most of his sound being absorbed by the foam on the chamber’s walls. Even the handles of the heavy doors are made of Fiberglas, and the doors are lined with copper to ensure the entire room is a Faraday cage. The point of the chambers is to map the electromagnetic characteristics of a device by eliminating all other electromagnetic signals. The device to be tested gets placed in a chamber, and when the door is closed, it’s cut off from the rest of the world. 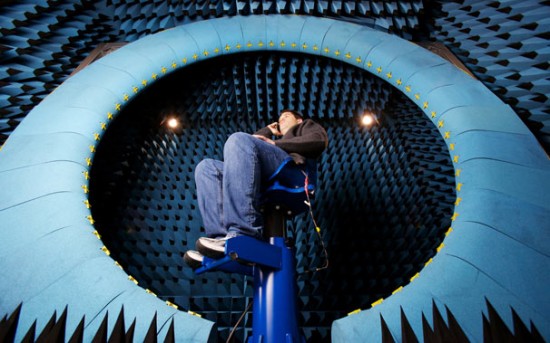 In earlier stages of development, during which radiation levels were uncertain, the development team taped the smartphone to “phantom” heads and hands–proxy mannequins filled with fluid to mimic the “dielectric characteristics” of the real human body part. Tests were also conducted while humans were holding the iPhone, as depicted in the above image. The third test chamber journalists were introduced to, the affectionately named “Stargate” requires the tester to sit on a rotating blue chair while holding an iPhone. Engadget writes:

Essentially, this room is used to test signal in 360 degrees around a subject holding or using a device. The circular structure which surrounds the chair is dotted with single use antennas — those little yellow plusses you see — and all they do is tell the tester whether a signal has been received or not around the loop at that position. We can’t stress how incredibly isolated these chambers are. Calling them a dead room would not be an understatement. We’ve been in some pretty dead rooms before, but these are basically foam coffins.

Bottom line: Apple impressively tested the iPhone 4 under many conditions to ensure a quality product. Still wish we didn’t need a bumper, though.

(via Macworld and Engadget.)