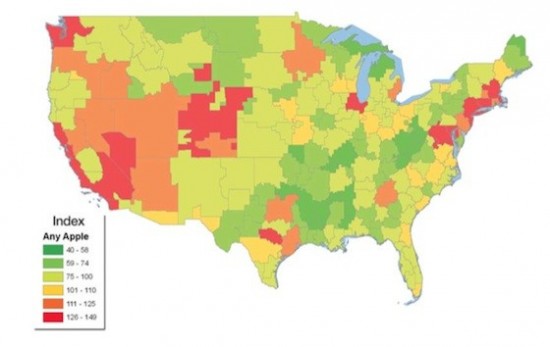 The analysts at Experian Simmons have turned their attentions to everyone’s favorite group of inscrutable consumers: MacHeads. In a sweeping analysis of 206 designated market areas across the U.S., they’ve found and ranked the urban areas in which people are most likely to own Apple products like iPods, iPhone, or Mac laptops or desktop computers.

In these highest echelons of Apple product ownership, consumers are anywhere from 39 to 49 percent more likely than the average American to own or use an iPod, iPhone, or Mac, meaning close to one out of three bear the mark of Jobs.

Fortune has a more detailed analysis of the top ten metropolitan areas by Mac usage.

(Fortune via TUAW via JimmyR. Title image via Experian Simmons.)