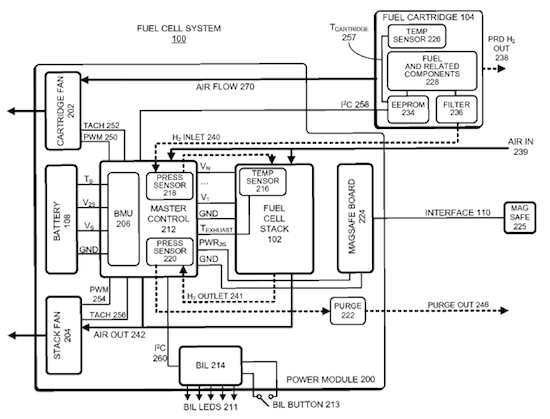 Ever feel like MacBooks could be even smaller and lighter? Sure, the MacBook Air is floating around out there, as thin as thin could be, but if two recently discovered patents have anything to say about it, as thin as thin could be isn’t thin enough. The Apple patents focus on employing the use of fuel cells to power a “portable computing device,” and if they replaced the current batteries used to power the portable computing devices, the devices could become even smaller and more efficient than they currently are.

Apple notes that using hydrogen fuel and hydrogen fuel cells are not only more efficient in terms of being a renewable energy resource, but using this kind of fuel cell could allow a portable computing device to operate for days or even weeks without having to refuel.

A cleverly devised system, the patent for the actual system describes a device that can both provide power to, and receive power from, a rechargeable battery within the portable computing device. Something like circular breathing, but for batteries. It is proposed that the fuel cell system could include a fuel cell stack which would convert fuel into electrical power — kind of the whole point.

The goal of the design is not only to find a better renewable source of energy, but to reduce the size, weight and cost of the fuel system, which would remove the need of a heavy battery.