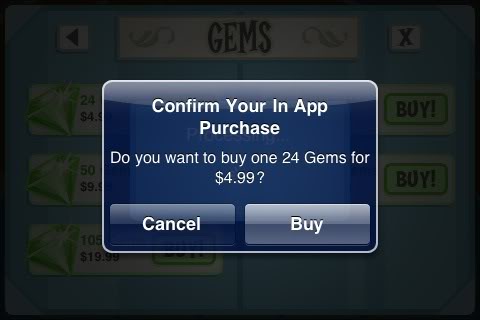 Anyone who’s spent more than 5 minutes looking around any app store anywhere knows that just because an app is free doesn’t mean that it won’t eventually give you the opportunity to shell out some cash. Apps that are free on their face, but offer users additional features or cybergoods at a price — commonly known as “freemium“ apps — are far from rare, and if you have a kid who uses your iDevice, they can be far from free as well. One dad, upon learning that his daughter dropped hundreds of dollars on in-app Gems and Zombie Toxin, filed suit against Apple allowing these sort of games to market to kids. Now, Apple’s claims for dismissal have been denied, and the suit is due to move forward.

Garen Meguerian of Pennsylvania launched his class-action lawsuit against Apple back in October of 2011, and now it’s finally set to move to trial. While in-app purchases are not inherently malicious, Meguerian argues that Apple’s willingness to aim particularly addictive freemium games to children is. As he says in the suit:

These games are highly addictive, designed deliberately so, and tend to compel children playing them to purchase large quantities of Game Currency, amounting to as much as $100 per purchase or more.

Despite the dismissal of Apple’s claims, Meguerian is still going to face a tough fight. Back in 2011, Apple changed its policy on all purchases. Before the change, entering your iTunes password on a device would authorize it for purchases for the next 15 minutes. After the change, each and every purchase requires a fresh entry of the password. In order to make purchases like this, Meguerian’s daughter must have had his password. Apple’s argument here is pretty straightforward: That’s your bad, man.

Only the trial will tell, but if you ask me, Apple’s defense is pretty bulletproof. Marketing to children isn’t exactly some new advertising strategy. Have you seen a toy commercial recently? As long as Apple requires authorization to purchase, in-app or out, what are they doing wrong? If a child gained access to his parent’s credit card, went online and purchased some toys, you wouldn’t hold the ISP, or networks that air commercials, or the toy company responsible for it. You’d blame the parent who left the credit card lying around, or maybe the kid if you’re his parent and he was nefarious about getting ahold of it. Even so, it’s still your problem.

The exact details of Meguerian’s case aren’t totally clear but if he just left his daughter alone with an iDevice and his iTunes password, his judgement should be called into question as much — no, moreso — than Apple’s. On top of that, Apple isn’t even the one selling or marketing, and they’ve put reasonable restrictions in place to keep this exact kind of thing from happening. You could hardly pick a less responsible party.

Nevertheless, the case has been allowed to continue and Apple faces about 5 million dollars in damages if they lose. I think it’s doubtful they will. Taking someone to task over trying to use your children to separate you from your money is one thing, but at least pick someone relevant to the issue. What else could Apple really be expected to do in order to prevent this? Remove all freemium games with colorful graphics and simple, addictive gameplay from the App Store? Require users to list the last 4 presidents of the United States before allowing a purchase? There’s a happy medium where making a purchase is not too hard but just hard enough, and Apple seems to have found it. You can’t fault them for letting people try to sell things, can you? I guess we’ll have to wait and see.