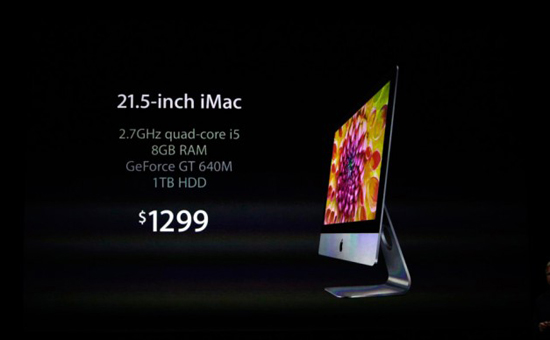 The majority of Apple‘s design focus as of late, barring the iPad Mini, seems to have been making everything they can thinner, wider, and with more screen space than ever. None of Apple’s newest announced products represent this maxim more than the newest iteration of the iMac. Coming in either 21.5 or 27 inches, this version tapers down to an almost impossibly thin 5mm edge. To put things in perspective, that’s about the width of five paperclips. That’s not all that it has going for it, either.

How did Apple manage to get it that thin, though? Well, they laminated the glass and display together, eliminating around 2mm of air between the two. They also had their engineers use something called “friction stir welding” to merge aluminum molecules together in order to create a seamless piece. Even being this ridiculously thin, both sizes offer 178 degree viewing angles.

The display also utilizes a new technology called plasma deposition to include an anti-reflective coating that’s just a nanometer thick, but it provides a 75% improvement over previous models. That’s just the icing on the display, though. The best part’s inside.

Apple is including what they’re calling a Fusion Drive within the newest iMac’s innards. Basically, each model will come with a 128GB SSD and a 1TB or 3TB hard drive that work together to provide the best experience possible. At today’s event, Phil Schiller said that applications and the operating system will be stored on the SSD while the more traditional hard drive will handle documents and the like. Flash storage isn’t a new technology, but this is definitely a novel way of utilizing it together with a typical hard drive. The iMac supposedly knows inherently where to handle different operations as they come up.

The 21.5-inch iMac will be on sale in November and starts at the somewhat reasonable price of $1,299. Those waiting for the 27-inch version will have to wait until December and part with at least $1,799.

(via Wired, The Verge, image via John Bradley/Wired)