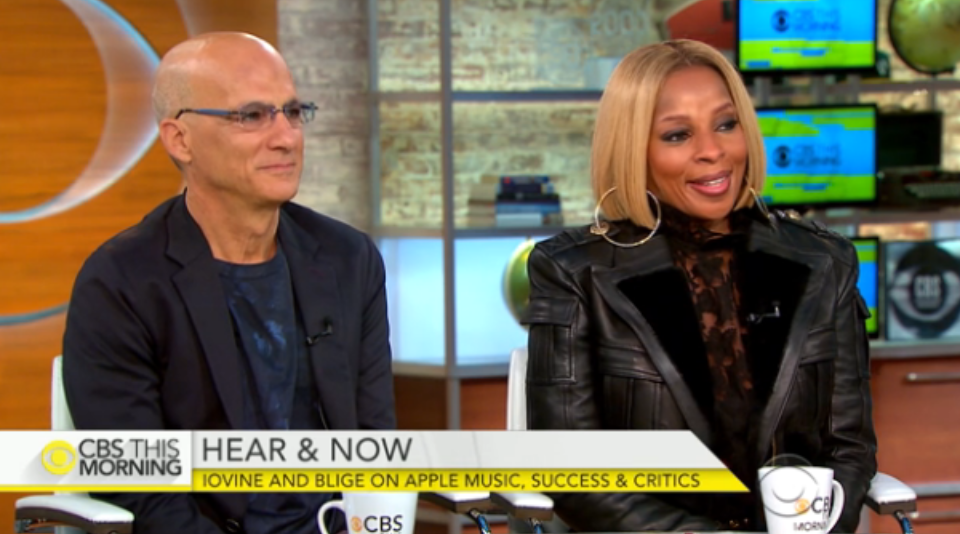 I can’t think of a direct equivalent to the Bechdel-Wallace Test in music, but if we have one, Apple Music’s Jimmy Iovine might have failed it during his This Morning appearance on CBS with Mary J. Blige yesterday.

Iovine and Blige were there to support a new Apple Music ad, one of three directed by Ava DuVernay and starring Blige, Kerry Washington, and Taraji P. Henson. The ad itself is pretty great (you can watch it in the clip above) — it features the three stars as themselves, hanging out and talking about some of their favorite music.

When asked to explain the creative concept behind the ad, Iovine said:

So I always knew that women find it very difficult at times – some women – to find music. And this helps makes it easier with playlists, curated by real people. They’re not made by algorithms alone – they’re made by algorithms but with a human touch.

I mean… how can you make a sweepingly condescending statement like that while sitting next to Mary Freaking Blige? We are all mere mortals not fit to look Blige in the eye, let alone insult her gender’s musical abilities!

Iovine went on to talk about the ‘inspiration’ behind the spot:

I just thought of a problem: girls are sitting around talking about boys. Or complaining about boys! They need music for that, right? It’s hard to find the right music. Not everyone… knows a DJ.

This is what I mean by the musical Bechdel Test. ‘Boys’ are mentioned in some of DuVernay’s Apple ads, but as replaceable afterthoughts, not the women’s main motivation for spending time together or listening to music. If a man can’t imagine a scenario in which women talk about something other than men, than I don’t really expect that man to understand or respect me enough to deliver a service that I’ll actually want to use.

In what was either a stunning display of self control and generosity or a stark depiction of the patriarchy at work, Blige didn’t contradict or clarify any of Iovine’s comments. In fact, Iovine did most of the talking during the segment (although one of the female hosts did say in response to his females-are-musically-challenged theory, “He’s talking about me, I told him that”).

Obviously, Iovine’s statements are a silly misrepresentation of female music fans. But that doesn’t mean they don’t highlight an overall tendency in the music world, or any creative media, really, to diminish the accomplishment of female professionals and mock the tastes of female consumers. If there’s any truth to Iovine’s comments, it’s due to the fact that women are taught to distrust our innate preferences. There’s a lot of music I like and enjoy on a regular basis (mostly musicals and mortifying pop stuff), but when asked what I listen to, I’m usually too embarrassed to answer honestly. If I’m ever asked to list bands I like (my most dreaded small talk question), I wind up talking about groups former boyfriends have introduced me to. So, sure, some women are just bad at finding music, but I suspect that a portion of those women do know what they like, but disavow or hide their tastes for fear of gendered judgement.

Thankfully, Iovine has listened to consumer’s concerns about his comments. In a statement released yesterday evening, he explained:

We created Apple Music to make finding the right music easier for everyone — men and women, young and old. Our new ad focuses on women, which is why I answered the way I did, but of course the same applies equally for men. I could have chosen my words better, and I apologize.

This Morning anchor Gayle King also argued that Iovine’s interview statements were taken out of context:

Although I personally agree with Brooklyn Mag‘s Caitlin White that Iovine demonstrated a “soft misogyny” with his statements, I do think his commitment to showcasing female talent might be a better indicator of Apple Music’s values than thoughtless comments made in an interview. If one wants to be really optimistic, you could even argue that Iovine’s bro pas indicates a level of self-awareness on his part–maybe he has awesome women like Ava DuVernay and Blige on board because he knows he has a hard time extrapolating on gender issues.