Apes Apparently Use The Breaststroke While Swimming Just Like We Do 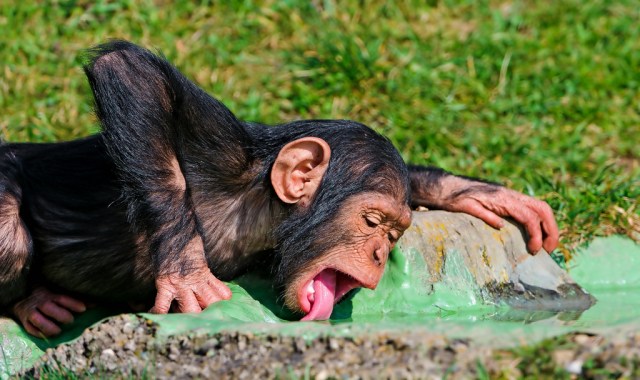 On TV and in movies, you can see various types of primates doing all kinds of athletic things like climbing trees, swinging from vines, or even playing hockey. But swimming? That’s pretty rare, but it happens. Allow Cooper the chimpanzee and Suryia the orangutan to demonstrate their swimming technique for you.

Now you’d think that apes would use a type of doggy paddle like most other four-legged mammals do to stay afloat in the water, but Cooper and Suryia actually performed a variation on the breaststroke. They move their limbs out sideways from their bodies kick with both feet simultaneously. This was discovered by researcher Renato Bender from the University of Witwatersrand in Johannesburg, South Africa.

Interestingly, Cooper kept his eyes closed the entire time, which just goes to show you how rare it is for a chimpanzee to be swimming at all. “You should expect deviation from doggy paddle in animals that, during their evolution, have had little contact with water and therefore almost completely lost the instinct to swim,” Bender said. He also suggests that the natural inclination towards the breastsroke has to do with the similar motions apes use when climbing from vine to vine.

These two, however, were even comfortable moving underwater, which they were able to do here by gripping onto wires. So maybe that’s another way that you can bond with any potential primate friends you might acquire. In fact,we bet the Tarzan Broadway musical would have done better if there’d been a really elborate Rocky Horror-style floor show in an Olympian pool.

(via Newscientist, image via Tambako The Jaguar)