Bummer News of the Day: Dolphins Mysteriously Turning Up Dead In Droves

Is this a really twisted way of informing us that the Vogons are coming to destroy us? 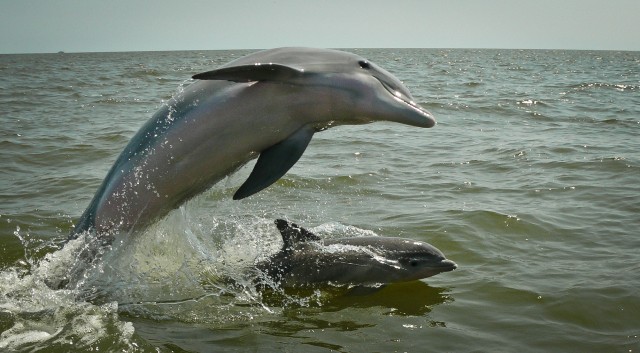 Over 120 bottlenose dolphins have been found dead or dying on the East Coast since June of this year. This is really sad, guys. Not to mention scary — scientists as of yet have no idea what is causing the rash of dolphin deaths, but one researcher has already said this likely indicates a serious condemnation of the ecosystem’s health.

Unfortunately this is not a new problem, but it is one that hasn’t been seen in a while; the last time such an epidemic occurred was between 1987 and 1988, when over 700 dolphins died of bacterial and viral infections. Scientists are performing necropsies on some of the animals that are currently washing up on shore to determine the cause of this current wave of deaths.

Kim Durham, the director of a Long Island rescue program, has said that one dolphin tested positive for mobillivirus — basically the dolphin form of pneumonia. While this might be the culprit, it’s too early to eliminate other viral or bacterial infections, as well as possible biotoxins in the water. In fact, it may be several months before a definitive conclusion is reached.

Want to hear the saddest part, though? Not all the dolphins are completely dead when they wash up on the shore. Some are only in serious distress. But there is only one dolphin rehabilitation tank in all of the Northeast, so the seriously ill dolphins have to be humanely euthanized. Resources are too lacking for anything else.

Durham explained that these dolphins, who weigh several hundred pounds on average and are more than capable of hurting people, know that they’ve come to shore and aren’t confused about what’s happening to them. Dolphins intentionally beach themselves when something is wrong and will strand themselves elsewhere if returned to the water — which means that people who attempt to push them back into the ocean are not doing the right thing, no matter how helpful they’re trying to be.

So just to be clear: dolphins are dying by the dozens. Those that wash up still alive have to be put down. This is kind of awful and there’s a good chance it’s our fault. Can we all please just take a minute to try to not destroy the earth quite so fast? Think of the dolphins, guys.