AOC’s Among Us Twitch Stream Was a Landmark Political Event 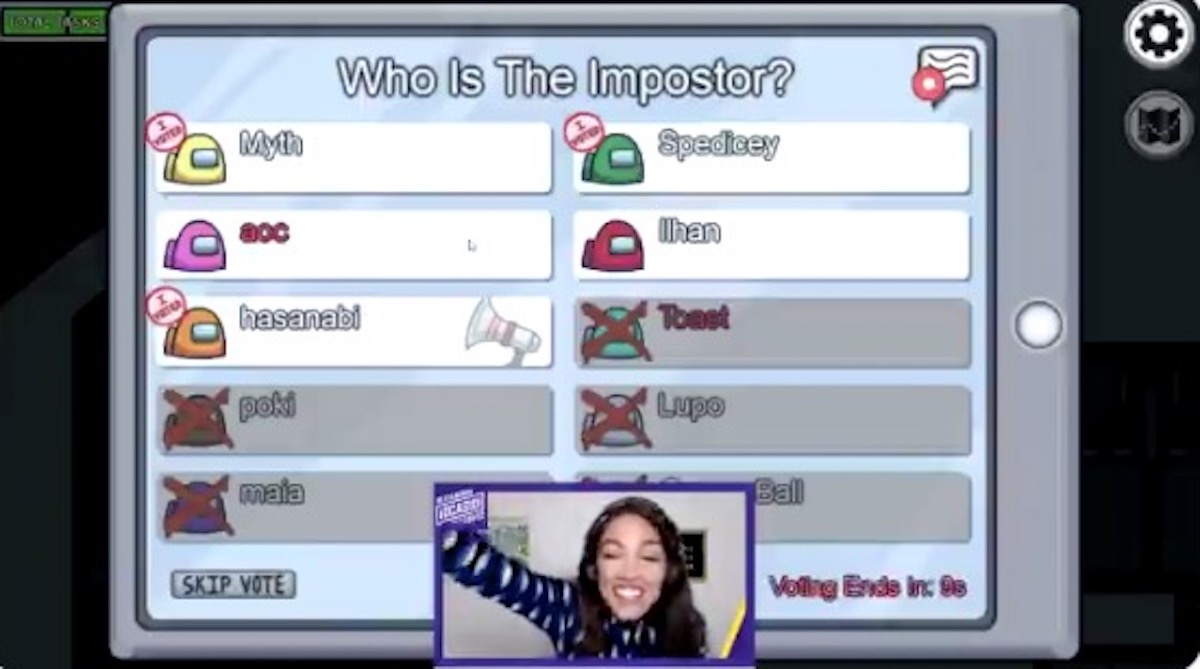 On Monday, Congresswoman Alexandria Ocasio Cortez posted a tweet asking if anyone would want to join her in a Get Out the Vote Twitch stream of Among Us. At the time, she’d never played the game and she didn’t have her own Twitch channel, though she’d joined other gamers on their streams before. Just over 24 hours later, the stream attracted more than 600,000 viewers, making it the third-most-watched Twitch stream ever and, according to Run for Something’s Amanda Litman, the biggest GOTV rally of 2020—and that’s not even counting all the clips that have been shared since, many of which have over a million views on Twitter and TikTok.

AOC was joined by a mix of gamers, activists, and fellow lawmakers, including Rep. Ilhan Omar, who clearly enjoyed her time playing.

Taking recommendations for my next stream…

During the stream, AOC and others did talk a bit about voting. The congresswoman talked about the importance of making a voting plan and encouraged people to support progressive candidates. Myth, who is 21, talked about voting for the first time via absentee ballot.

It was nice playing with @AOC tonight! Thank you all for coming out and watching. Remember to vote this election as well. This election is my first time voting and its super easy to do so do it. 🙂

There were a few other politics-adjacent moments as well, like this hilariously upsetting exchange with @Hbomberguy about the ease and affordability of healthcare in the UK.

AOC talks healthcare with @Hbomberguy, who is from the UK, where healthcare is free. pic.twitter.com/3wMUZXpuF7

But for the most part, the stream was just about playing the game. And it was so much fun to watch. AOC was visibly nervous about playing Among Us, which, if you’re not familiar, is a multiplayer game that takes place on a spacecraft, with a certain number of imposters onboard, trying to kill and sabotage their fellow crewmembers.

AOC was the imposter in her first game and the first time she had to kill someone, she fretted over it. “I can’t kill Poki,” she said. “She’s so nice, I can’t do that.” When she did kill Pokimane, she gasped in horror/delight.

The whole stream was just so much fun, for the viewers and clearly for the players as well.

highlights from the @AOC among us stream – my love for this woman knows no bounds 💖 https://t.co/aZErKVAlVw pic.twitter.com/OCa06KMuob

AOC just did the most amateur kill ever and im howling laughing at the fact she got away with it pic.twitter.com/NV01ZJf5Bt

today. i was killed by @AOC in among us within the first five minutes. pic.twitter.com/W1Uf17o34K

That said, the importance of this stream as a political event can’t be overstated. “The future of politics isn’t just young, tech-savvy, and meme-literate. It is accessible,” writes Polygon. Other politicians have taken to Twitch, most notably Bernie Sanders and Donald Trump, both of whom use their channels to rebroadcast rallies and other appearances. AOC, on the other hand, used Twitch for what it is and as a result, was able to engage with hundreds of thousands of supporters and potential supporters on genuine terms.

AOC, unlike literally every other politician and extension of the U.S. government, evidently recognized that, putting out a call to streamers and industry experts rather than trying to reverse-engineer another slick, tediously sanitized streaming operation. This meant that she immediately had a gargantuan audience of people who actually wanted to watch her stream.

Most people are not just interested in one thing, be it politics or video games. Most of us can enjoy both, and we can and want to enjoy them at the same time. AOC is great at this, at bringing politics into personal spaces, like her Instagram videos where she discusses policy while also explaining her makeup routine. It’s humanizing and it makes politics incredibly accessible, especially for young people but also, really, for everyone.

what an incredible night. more than half a million people tuned into watch a record breaking #gotv effort we put together in less than 24 hours which started with a single tweet by @AOC – i hope you boomers are paying attention.

In game design we talk a lot about going where players are and engaging folks on platforms they’re already excited to be on. @AOC’s engagement with young folks and doing so with internet celebrities (streamers) just feels like the smarter version of the celeb endorsement. /1

And it is done so authentically- she already plays games (League specifically) and had League streamers as the first folks she connected with, allowing her to speak with a high degree of empathy and relatability to the audience she was trying to reach, where they already were! /2

I mean this totally non-sarcastically: AOC’s stream with a lot of super prominent streamers is probably going to be the single-largest event to reach young voters. Soooo many people tuned in. Probably going to be lost in the general internet illiteracy, but it was a huge stream https://t.co/ywhk0PwVH4

This is brilliant. My 15 year old woke up and couldn’t wait to tell me about @AOC on Twitch and how great it was. Laying the foundation for voter/political enthusiasm. Gotta go where the kids are. https://t.co/syFIGsWBJl

this is the future liberals want pic.twitter.com/myShcukYCl