AOC Calls Out Manchin Being “Undecided” on Confirming Women of Color After He Voted for Trump’s Racist, Zero-Experience Picks 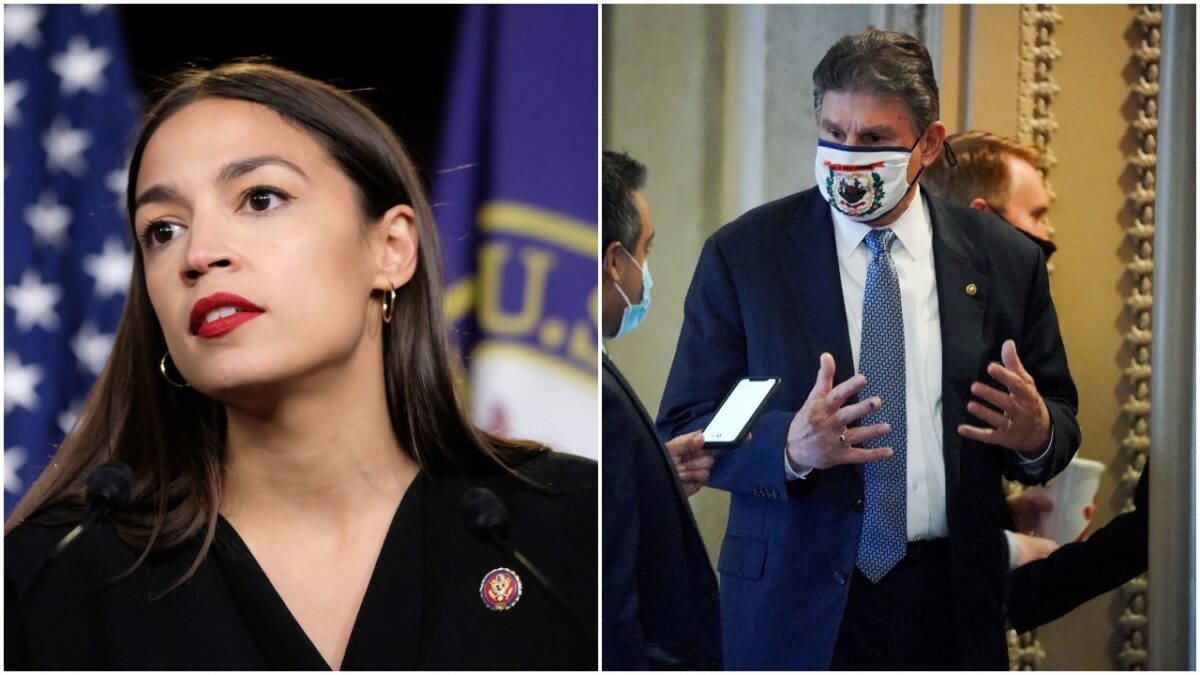 Now that Trump’s impeachment trial has ended and the Senate power-sharing agreement has been achieved, the Biden administration can finally get moving on confirming their nominees for cabinet positions. But given the slim majority Democrats hold, there will still be struggles along the way, namely from West Virginia Senator Joe Manchin. While Manchin is a Democrat, he is much more conservative than his party members, and his stubborn refusal to get on board with popular agenda items like a $15 dollar minimum wage and nuking the filibuster makes him a thorn in the side of his own party.

Now, Manchin is exerting his influence to derail and delay the confirmation of two women of color: Neera Tanden’s nomination to lead the Office of Management and Budget, and Rep. Deb Haaland’s nomination for Secretary of Interior. Manchin has been said to be “undecided” on Haaland, and while the two have had Zoom conversations, he is said to have “remaining questions.” Haaland, who currently represents New Mexico’s first congressional district, is not only qualified for the position, but her confirmation would make her the first Native American to run the Department of the Interior, and the first Native American Cabinet secretary ever.

Joe Manchin voted for Brett Kavanaugh and Jeff Sessions, but is a No on Neera Tanden and “undecided” on Deb Haaland? 🤔🤔🤔 https://t.co/7VxhclO08D

Manchin’s position is all the more damning considering he voted to confirm several of Trump’s cabinet nominees who were grossly unqualified, racist, and ignorant. Manchin voted to confirm noted racist Jeff Sessions for Attorney General and Dr. Ben Carson for HUD, despite the doctor having zero experience in the field. He also voted to confirm Brett Kavanaugh for the Supreme Court despite sexual assault allegations and Kavanaugh’s grossly unprofessional behavior during his hearing.

Rep. Alexandria Ocasio-Cortez called Manchin out on Twitter, writing “Jeff Sessions was so openly racist that even Reagan couldn’t appoint him. Manchin voted to confirm him. Sessions then targeted immigrant children for wide-scale human rights abuses w/ family separation. Yet the 1st Native woman to be Cabinet Sec is where Manchin finds unease?”

Jeff Sessions was so openly racist that even Reagan couldn’t appoint him.

Yet the 1st Native woman to be Cabinet Sec is where Manchin finds unease? https://t.co/wyki5iE36Y

.@DebHaalandNM is a profound public servant and champion for working families.

Her appointment as Sec of the Interior would be historic, and her leadership holds the promise of progress for our country.

Call your Senator to support her confirmation. 📞pic.twitter.com/Kq9mlYmHMe

While Manchin remains undecided on Haaland, he has said that he will vote no on Tanden’s confirmation, citing Tanden’s Twitter history of directly criticizing members of Congress. Manchin said, “I believe her overtly partisan statements will have a toxic and detrimental impact on the important working relationship between members of Congress and the next director of the Office of Management and Budget.”

So … Trump and his cronies can tweet lies and hate speech and that’s fine, but a woman of color sends some critical tweets and she doesn’t get confirmed? In Manchin’s view, sexual assault allegations and historic racism are nothing compared to some tweets I guess. The double standard is obvious and has not gone unnoticed.

Rep. Judy Chu (D-Calif.), head of the Congressional Asian Pacific American Caucus, said to Politico, “Her nomination is very significant for us Asian American and Pacific Islanders. I do believe that this double standard has to do with the fact that she would be a pioneer in that position.”

Rep. Grace Meng (D-N.Y.) added, “We can disagree with her tweets, but in the past, Trump nominees that they’ve confirmed and supported had much more serious issues and conflicts than just something that was written on Twitter, … This is not just about any one nominee like Neera, or whoever else — it’s just about this pattern that is happening and increasingly hard to ignore.”

Is there a pattern here??? Hope they’re using the same standard and not moving goal posts for only certain nominees. @DebHaalandNM @neeratanden @vivek_murthy https://t.co/TN2oMc05s5