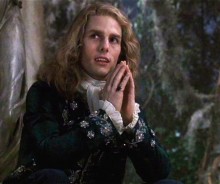 Anne Rice news is making the entertainment blogs this weekend for an interview with Vulture Magazine in which she hypothetically casts a hypothetical modern adaptation of Interview With a Vampire, mentioning, among other people, Robert Downey, Jr. for the role of Lestat.

Now Lestat, there are a lot of people who could play Lestat…  Jamie Bamber, he’s terrific, I was just watching him last night in England’s Law & Order. I’d seen him on Battlestar Galactica, but I’d never seen him unleash that beautiful diction. So I think there are many, many actors…

Robert Downey Jr.? That would be wonderful. He is a great actor. He would bring the gravitas and the wit and humor and all of that to the part, and I don’t think he’s too old. I think if he had a blond wig and makeup, he would be a wonderful Lestat. Lestat has to have the gravitas of a 200-year-old man and Robert Downey Jr. can do it.

But we were actually much more interested in her comments on Twilight.

For example, she considers the high school setting of the books to be a “stroke of genius,” although modifies her position slightly:

Which, in a way, I thought was incredibly ridiculous. Because what immortal would spend his time going to high school over and over like that? Go to Katmandu or Memphis or Rio De Janiero or Rome! But it was a stroke of genius, because it gave great pleasure to millions of kids.

It’s nice to be reminded of the older vampire tropes by the writer who brought the last great enduring Vampire to the collective culture.  It’s not for nothing that True Blood takes place in the deep American south, that Marvel‘s vampires are deeply intertwined with the New Orleans based Thieves’ Guild, and Underworld and Whitewolf’s Vampire: The Masquerade feature tightly hierarchical vampire social groups.  This is all Anne Rice vampire stuff.

Her opinion of the Twilight books is largely positive, however.  She points out that love between an older, threatening, but protective male and a young, weak, and vulnerable female is an old and legitimate trope.  Considering that we do have some affection for Jane Eyre, we have to reluctantly admit that we see her point.

On the other hand, did Jane Eyre have two sequels and screaming fangirls?  Well… actually it probably did have the 17th century equivalent of the latter.

Vulture gets Rice on the subject of Twilight by asking her if she sees Stephenie Meyer‘s Mormon background in the themes of Twilight as much as Rice’s Catholic background affected Interview, so if you don’t mind a walk through Anne Rice’s odd personal theological history, you can read the entire interview here.