Okay, so I know I’m supposed to be a game journalist, but due to Ohio’s recent heat wave, my brain is coming off of the effects of heat exhaustion and is therefore out of commission. So instead of trying to come up with a relevant topic to write about this week, I’m just going to talk about something that I’ve been itching to address for a long time, but haven’t had the opportunity to yet. And that is… a comparison of storytelling quality between the first and second anime adaptations of Fullmetal Alchemist. So. Hiromu Arakawa’s 2001-2010 manga Hagane no Renkinjutsushi, or Fullmetal Alchemist in English, was phenomenally popular in its day and continues to be so now. In 2003, animation studio Bones created an anime version that followed the original plot up to a certain point, and then split off in a different direction in order to avoid making too many filler episodes while Arakawa continued to produce the serialized manga. The new storyline was created with some input from Arakawa but was largely handled by Bones. It was brought to America and became massively popular on Adult Swim, cementing itself as the version of Fullmetal Alchemist that most Americans would know best.

In 2009, after the manga was mostly completed, Bones took another stab at adapting the material. This time, though, they wanted to stay faithful to the original storyline Arakawa had intended. The result was Fullmetal Alchemist: Brotherhood, which quickly recapped the events up until the original anime split off and then slowed down its pacing to fully explore the manga’s plot. Brotherhood was also well received in Japan and the West, but it just couldn’t stick in the popular consciousness like the first anime did.

As for me, I was ten years old when the first anime came out. It was on relatively late at night, and I was a sensitive kid who couldn’t tolerate much violence, so I never knew much about it. A few years later, though, I started reading the manga and kept up with it until it finished. Then, in college, I finally went back and watched both anime series. So how do they stack up, both on their own and compared to their source material? Let’s dive right in and see.

Minor spoiler warning from here on out. 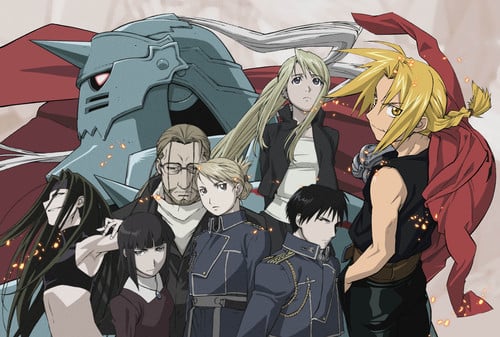 From my reading of the material, the main themes of Fullmetal Alchemist are man’s inhumanity to man and the struggle of humans to understand their own mortality. Both anime explore these themes in depth, but through different lenses—that of their villains. Protagonists Ed and Al don’t change personalities between the adaptations, but their behavior is mostly reactionary to their surroundings, so they grow differently based on who they must defeat in each version of the story. Also, the homunculi and their origins change based on who they serve as minions to. So in order to see which anime is better written, we have to judge them by their respective villains—Danté and Father.

Danté, the villain of the first anime, is at the center of a much smaller and more intimate story that really only concerns herself and the Elric brothers’ father Hohenheim. Granted, at first both she and Father have much more interest in Hohenheim than Ed or Al, but the more insular nature of her storyline makes the rest of the characters seem irrelevant. The brothers, the military characters, and the homunculi are brought together only by the actions of one person—Danté—and by the consequences of human transmutation that they have had to endure. 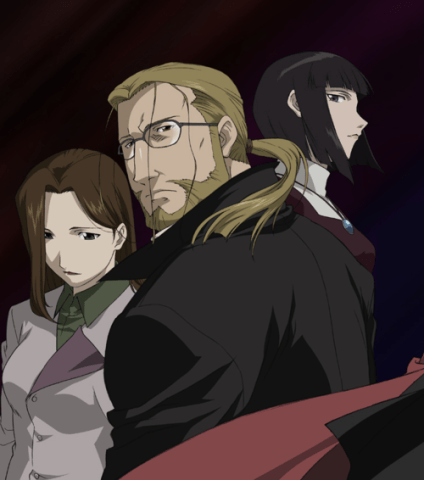 Because of this, the first anime’s story structure is somewhat more realistic, with a cast of characters that tangentially relate to each other through theming, but less by actual plot details. The first anime focuses more on the characters’ struggle with mortality than their callousness to each other and explores themes of death and rebirth from many different perspectives. In this version, the homunculi are the leftovers from human transmutation that come back to “haunt” the ones who brought them to life. It’s more than a little bit unsubtle, but it gives the first anime its own identity and fits well with Danté’s storyline.

However, I think that the set-up created by the section of the anime before it splits off—the part that stays the same in all versions of the story—just doesn’t work with the first anime’s new plotline. Sure, the elements of regret and loss (such as Ed and Al’s attempt to bring back their mother and the Shou Tucker episodes) are done very well and tie in with Danté’s plot later, but everything else just falls by the wayside once the storyline splits.

This richly detailed world and many of the characters who inhabit it just aren’t necessary for the smaller and more personal story that the first anime ends up turning into. If it had been produced from the beginning with the Danté plot in mind, things like the Ishvalan war and many of the military characters wouldn’t even have been included. The homunculi are built up as these independent forces of nature, but they end up as defanged wayward spirits instead. Alchemy is a mysterious force understood only by a few people, but its origins aren’t important in the grand scheme of things. In other words, the world that the original story created was too big for the first anime’s new material. And because of that, the new plotline was disappointing in comparison. 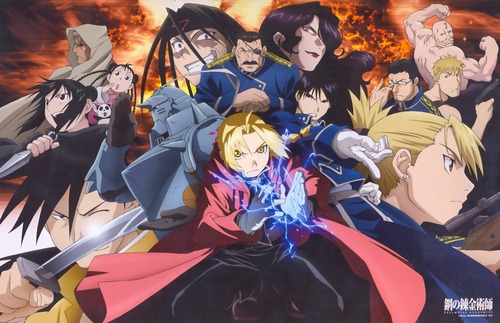 So how did the second anime (and the manga) choose to continue the story after the split? It kept the large scope that it had set up and ran with it, weaving a tale of conspiracy and deception, with the fate of the world at stake. This time, Ed and Al are at the center of a conflict that’s much larger than they are, and so they must work together with both friends and enemies to bring down a foe that threatens all of their interests and lives.

It’s a matter of opinion whether Fullmetal Alchemist works better as a smaller character piece or a gigantic epic, but I think that the second anime’s approach is more effective in the long run. Arakawa’s writing and drawing style (“Men should be buff! Women should be va-voom!”) is grand and operatic, lending itself to more sweeping storylines and battles with entire armies. The quiet character moments are still there, but they serve more as needed lulls in the action to flesh out the characters rather than the main driving force of the story. 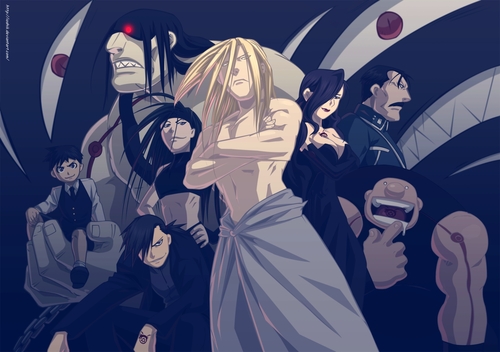 Nowhere is this grander approach more evident than in the characterization of Brotherhood and the manga’s main villain, Father. He is a literal manifestation of man’s inhumanity to man and the pursuit of immortality. Through a series of events that he has been planning for hundreds of years, this strange life form wants to become the most powerful and intelligent being on the planet, even surpassing the series’ very strange version of God. His motivation is echoed in the Elric brothers’ search for a way to restore their bodies, Colonel Mustang’s quest to be Fuhrer, and the homunculi’s need for purpose, among others. Father is also opposed by Hohenheim, who is his physical and thematic mirror opposite—a man who wants to die, but is cursed with near immortality. 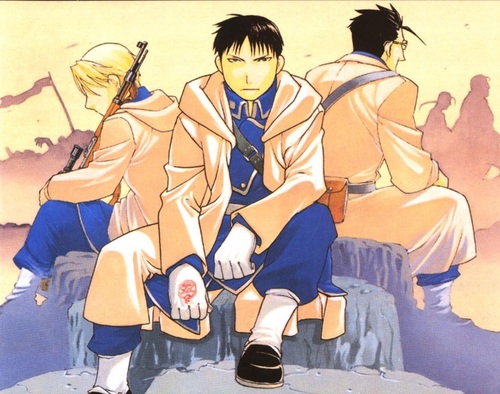 The Ishvalan War is also much more important in this version. It was a breeding ground of hatred and disillusionment that shaped the personalities of Scar, Winry, and most of the characters in the military, but it was started by a completely senseless act ordered by Father to fuel his own ambitions. The war is no longer just the backdrop for a few characters’ backstories—it’s a lingering wound that informs much of the attitude of the world that we see in the present timeline.

I feel that the more epic and operatic scope of Brotherhood and the manga works much better with the material before the split than the first anime does. This seems obvious in retrospect, but Bones didn’t know what Arakawa’s plan was for the rest of the story. They chose to take it in a more introspective direction, which works well on its own but clashes with the presentation of the previous episodes. I would love to see a version of the 2003 anime with a redone first arc, where the episodes before the split are specially written to flow thematically with the rest of the Danté plot.

But would Fullmetal Alchemist, as a whole, be better as a smaller story? Would the world and the characters that Arakawa created feel right in a retelling of the plot completely with Danté in mind? I think that their designs and personalities are better suited to the war epic that the manga and the second anime told, but what do you think? Would you want to see a remastered version of the 2003 anime, or do you like it the way it is? Do you agree with my assessment? Just let me know, and I swear we’ll talk about video games next time.

You can read more from Mary Lee Sauder on The Story Campaign or follow her on Twitter.