Two New Looks At The Andromeda Galaxy | The Mary Sue

We can’t think of a single better way to start your day than with the Herschel Space Observatory’s two latest incredible photographs of our nearest galactic neighbor, the Andromeda Galaxy. The new images use Herschel’s ultra-sensitive instruments to get a better look at the gas and dust that make up so much of Andromeda, resulting in photos that suffuse the galaxy with an otherworldly glow. Which is actually pretty appropriate, when you think about it. Keep reading for more images and details on how Herschel captured them. 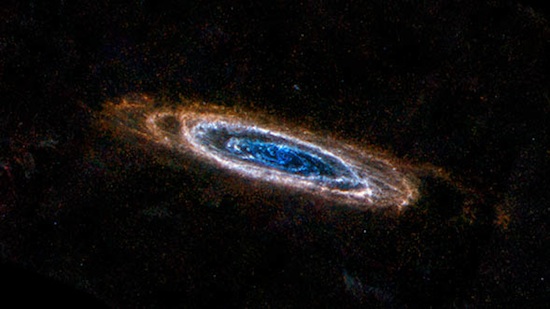 The lighter colored halo around this image of Andromeda is from the very longest, coolest wavelengths of light the system can observe, some of which can span as much as a half a millimeter — which is pretty short for anything  but a wavelength of light. It’s actually very long for that. The observatory’s ability to detect this light also allows it to detect the extremely cold dust motes that ring the Andromeda galaxy, many of which are just tens of degrees warmer than absolute zero. The above image is a combination of low-wavelength light images from the Herschel’s SPIRE instrument with other data from tools in its arsenal like the mass spectrometer and conventional camera. Strip all that data away, though, and your left with the photo below. 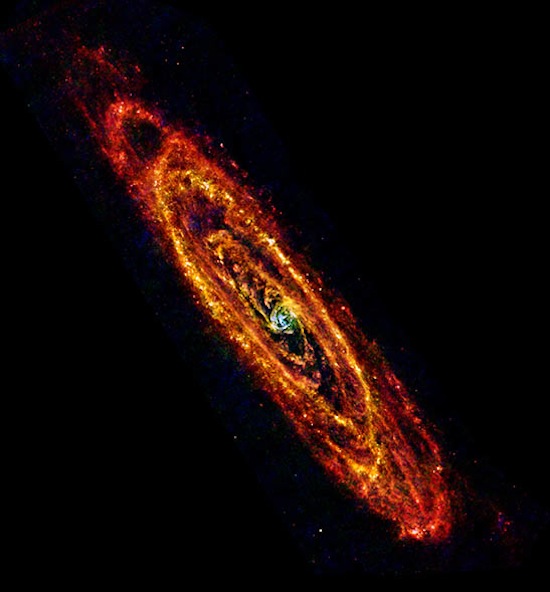 Yup — when you get a look at Andromeda at its very coldest, it looks like it’s on fire. Because space is amazing, that’s why.