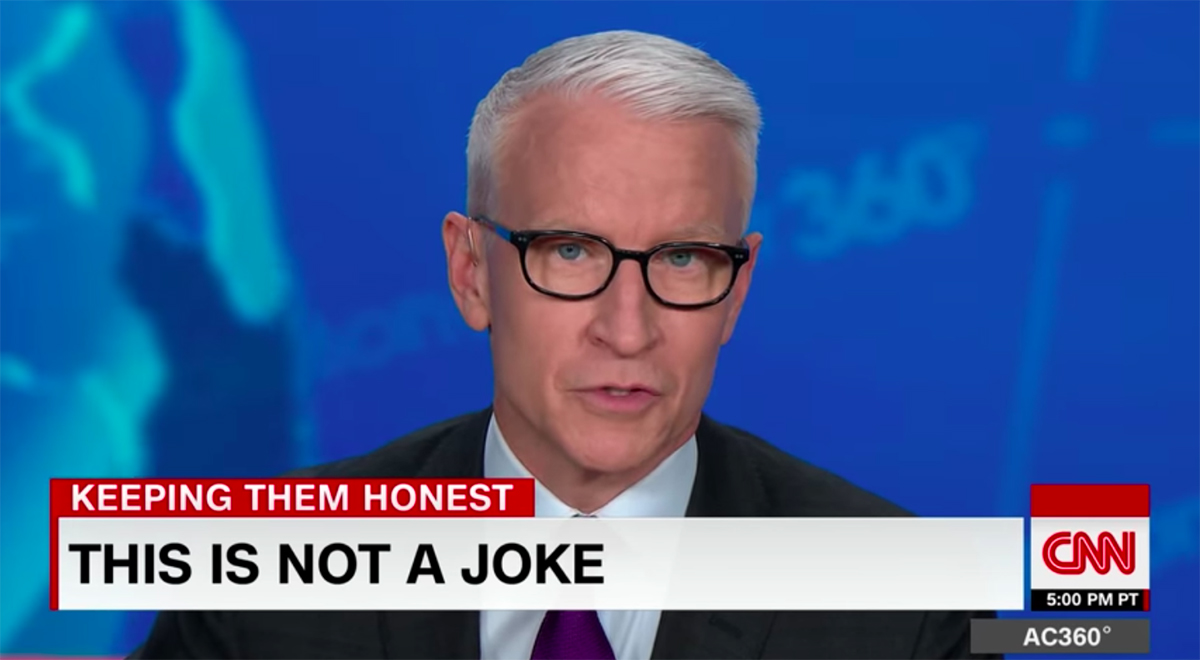 Anderson Cooper, much like the rest of us, is done with the lies and deflections coming from the White House. Whenever Donald Trump says something, five different people chime in to say that it is not what he meant, or that the media is taking it out of context and none of it is true. We’re watching him say these things in real time, and then we’re all being gaslit into believing what we saw wasn’t what happened.

Time and time again, the president will say something racist, and then his team or supporters flock to his defense to say that Donald Trump is the “least racist person” around, despite the fact that he shows us time and time again that it is not true. This time, they’re trying to defend him for throwing around the term “Kung Flu” about the coronavirus (he did) and comparing it to others calling it the Wuhan Coronavirus back in January.

What’s hilarious is watching Trump’s press secretary, Kayleigh McEnany, throwing the use of “Wuhan Coronavirus” at CNN as if calling it that is in any way as terrible as calling the virus the “Kung Flu” and Trump’s well-known attempts to leverage the virus’s region of origin into racist propaganda.

Throughout the video, all Cooper does is show the difference between what McEnany is saying and what Trump said on stage. It’s just deflection over and over again, and no one is paying attention to the fact that there is a very real pandemic happening while the president has just decided that it’s over.

You would think that the White House would be focusing on trying to keep American lives safe. Instead, Donald Trump wants to slow down testing for the virus because he thinks that our case numbers will then go down—another awful, self-serving thing he’s said that his defenders have written off as a joke even while he insists it’s not, despite that the real issue is that his administration has very much tried to push the very “everything is actually fine and higher case numbers are just due to more testing” narrative that such a “joke,” if it were one, would further. He also very much did call the virus the “Kung Flu,” and now the White House is saying that everyone does it. (Everyone does not.)

I have an immense sadness overwhelm me when I think about this for too long because, for any other president, this would probably be a big deal. With Donald Trump, it just doesn’t seem to matter. No matter what he says or does, he just keeps on doing it. No matter our outrage, he just keeps getting away with being racist and sexist and gross, and no one seems to care enough to stop him or, if they try, he just gets away with it, and it is truly exhausting.

Anderson Cooper calling out the White House for their hypocrisy and lies is what everyone should be doing, because if not, we’re going to be stuck in this cycle of lies, and right now, they’re extremely dangerous.