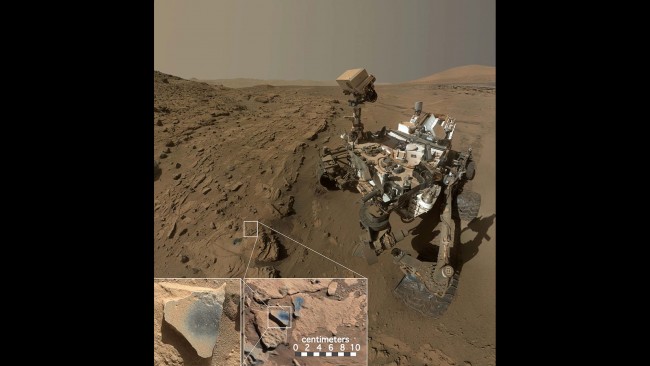 Venus may be a lot more like Earth—in terms of size—than Mars is, but Mars may once have been similar to Earth in more meaningful ways, unlike now, when it pretty much shares the general quality of being a giant ball of death with all the other planets in our solar system. Evidence is mounting that Mars once had lots of oxygen in its atmosphere to go along with its oceans of water, but that doesn’t necessarily mean it fostered life. In fact, it couldn’t been part of that “death ball” transformation.

Scientists at the Los Alamos National Laboratory have used instruments on board the Mars Curiosity rover to determine that rocks the bot examined on the Red Planet contain high levels of manganese oxides. The Opportunity rover also recently made a similar find, which suggests more than just a localized event. Nina Lanza—a planetary scientist at Los Alamos National Laboratory in New Mexico and author on the study—explained in a statement, “The only ways on Earth that we know how to make these manganese materials involve atmospheric oxygen or microbes. Now we’re seeing manganese oxides on Mars, and we’re wondering how the heck these could have formed?”

Don’t get too excited about that talk of microbes, though. The scientists don’t think that scenario is particularly likely, instead proposing that the oxygen necessary to form the manganese oxides could have come from the breakdown of water as Mars’ magnetic field collapsed. We have a lot to thank Earth’s magnetic field for when it comes to life on this planet, and this sign of what appears to be ancient habitability on the surface may actually just be a reminder of how unlucky Mars was in that department.

Lanza also mentioned, “It’s hard to confirm whether this scenario for Martian atmospheric oxygen actually occurred. But it’s important to note that this idea represents a departure in our understanding for how planetary atmospheres might become oxygenated.” That’s because we usually consider plentiful oxygen a sign of life. So, either Mars did have at least some kind of prehistoric life—enough to account for the oxygen—or there are other possible explanations for the existence of oxygen that don’t include life that we haven’t thought of before, which could change the way we look at all those alien worlds we keep finding.

Either way, it makes for some pretty compelling science. Speaking of which, Juno will reach its orbit around Jupiter next week!