Let Me Off at the Top!: Ron Burgundy’s Tell-All Memoir to Drop Before Anchorman 2

Boy, that escalated... not as quickly as one might expect. 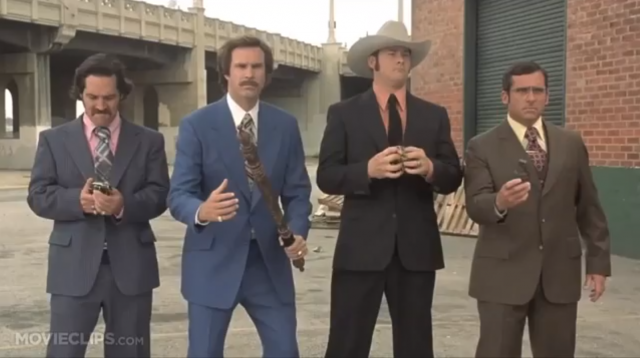 While we are all thrilled by the return of the classiest man this side of the seventies, waiting until Christmas for the next chapter in Ron Burgundy’s life does seem awfully unfair. Luckily, selfless man that he is, Burgundy is set to release a tell-all memoir November 19th, though no word yet on if it comes with an EP of his jazz flute recordings.

The full title is: Let Me Off at the Top! My Classy Life and Other Musings, so we can pretty much assume it’ll be, well, classy. It could also be full of musings about things that aren’t classy, like fighting in gang wars while not wearing a suit or that ship named Diversity in the, uh, Civil War era. What we do know thus far is that Burgundy himself was quoted as saying:

I don’t know if it’s the greatest autobiography ever written… I will tell you this much: the first time I sat down and read this thing… I cried like a goddamn baby, and you can take that to the bank!

Mauro DiPreta, VP and EIC of Crown Archetype, who are publishing the long overdue work, added:

Of course, it does seem worth pointing out that neither Murrow nor Cronkite could pull off an open, bright orange pimp robe. So get prepared for Burgundy’s glass cage of emotion to shatter, and reveal the gentle heart of the bear-fighting hairstyle icon who also, you know, told San Diego to go fuck themselves that one time.