An Interview With the Folks Behind Cartoon Network’s Over the Garden Wall, Premiering Tonight!

Vital information for your every day life. 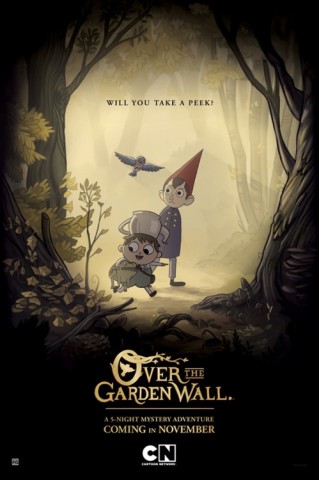 Over the Garden Wall is Cartoon Network’s first original animated miniseries event, created by Patrick McHale, one of the network’s up and coming ex-Adventure Time writers. Starting tonight at 7pm and continuing all this week, we’ll get the story of brothers Wirt (Elijah Wood) and Greg (Colin Dean) and their bluebird companion Beatrice (Melanie Lynskey), as they travel through the strange places beyond the Garden Wall in five half-hour segments. The Mary Sue and other journalists had a chance to sit down with McHale, Lynskey, and Dean to talk about the series at New York Comic Con.

Reporter: How did you come up with the idea for Over the Garden Wall?

Patrick McHale: A lot of it is personal experience, and sitting and daydreaming about things that – I don’t know — a lot of it’s just daydreams, thinking about this kind of place to escape in and get lost in. It’s very Fall-themed and so being in Los Angeles for like eight years without the Autumn season was sort of part of it too. Just daydreaming about that, as well, a fantasy version of it.

Reporter: How was it like, working with Elijah Wood?

McHale: It was amazing. It was so good. Yeah. He was exactly who I wanted. I said this earlier, but when I was looking for a voice for Wirt, the older brother, I said like “Uh, like an Elijah-Wood-type voice.” And then they just asked him and he was like “Yeah, sure.” He just brings so much emotion to the emotional scenes and comedy to the comedy scenes. I feel like the cast that we got was exactly what I would have written on a list of “if I could get anyone in the world, I would get this person, this person.” Those are the people we got. It was amazing! Everyone we got is so well suited to their character and their voice. Elijah’s character is sort of the essential character, and he goes through maybe the biggest journey through the series. His talent of being able to find those emotions and a lot of the acting ideas came from him, “can I do it a different way?” And he would find just what was needed. It was great.

Reporter: Melanie, you’ve been in so many different movies and TV shows, my favorite’s Detroit Rock City –

Reporter: How’d you get involved?

Lynskey: I got an audition. My manager said “do you want to go audition for this?” And I looked at it and I thought it seemed so beautiful and so special. I know Elijah a little bit through Peter Jackson, so that was exciting for me. We got to record together [just] one time, but that was okay. I just was super excited about it, and then I went and auditioned and Pat asked me to do it, so that was great.

Reporter: I’d like to ask both Colin and Melanie, what do you think really defines your characters in the show? What’s the dominant traits for them in your opinion?

Colin Dean: Well, Greg is kinda clueless. They could be in crazy danger and he’ll just be like “doot duh-doot duh-dooh.” And then Wirt’s always like “We’re in danger we gotta get outta here,” and Greg will be like “have you been listening to anything I’ve been saying, I’ve been saying *nonsense sounds*” and he just spaces off and Wirt will be like “Let’s go this way,” [points in one direction] and he’ll be like “Okay. We’ll got this way!” [points in different direction]. If they’re in trouble he’s kind of the – I’m trying to think of the word – comic relief. He’s kind of the comic relief.

Lynskey: The thing that I really love about the show is that it subverts your expectations a lot of the time. When you’re watching the story and there’ll be a little twist in it and you’ll be like “Oh, that’s not what I expected.” So the fun thing about Beatrice is that she’s very grumpy and impatient but the lovely thing is that there’s something underlying that, and she has her own agenda and own past. So it’s not just a grumpy character but there’s a lot of layers to it, which was really fun to play.

The Mary Sue: You’re Cartoon Network’s first original miniseries, why was that the choice for the show as opposed to a whole series or a movie?

McHale: It’s sort of a difficult show to make. The amount of musical variety, and we’re using real instruments for all the music, not synths; the backgrounds are so complicated; and the animation quality we wanted it to be a little bit higher, and that’s just not something that we can really sustain for a long ongoing series. That was a lot of it. I’m sort of spacing out, I was gonna say something else too, but… What was the question again?

TMS: Why a miniseries instead of a movie or a series?

McHale: Oh! Well, also it was nice to have the arc of the miniseries where you can tell one large story and explore the characters as you would in a feature or something. But then because every episode has this little new place that they go, it made sense to have it be episodic and not just one long-form story. It was hard to write.

Reporter: Would you want to work on something like this again in the future with Cartoon Network?

McHale: Possibly. It was really hard! Right now it feels like I would want to do something that’s easier. But… but maybe?

Reporter: What does the show, to you at least, say about family and especially about brotherhood since they seem to be the most important themes.

McHale: Well some of the lessons you’ll learn as you watch it, and I wouldn’t want to say now, but… Yeah, I don’t want to give too much away. But, family, and just responsibility are pretty big themes in it.

Reporter: You were talking about music just a minute or two ago. How would you describe the role of music in this miniseries?

McHale: Well, the mood of the show is a really important aspect of it. And so the music sort of paints — with the color scheme and all that stuff — the music finishes it off and makes it the right feeling for the audience’s experience of this place where we can delve into, sometimes, genres of music that might not match what we’re watching but give you a certain feeling.

Reporter: Is there a sort of mood or genre of music you want to reference?

McHale: There’s all sorts of stuff in there, it’s all kind of pre-1950s kinda music. There’s two opera singers we have doing music and then there’s old-time jazz and then there’s jug band music and there’s all sorts of stuff. It’s pretty diverse. The Blasting Company is the band that did all the music and… they did all the music. They’re incredible. Just all the instruments that they can play, all the talent that they personally know that they hired to do strings, it has lush string arrangements that they layered and pieced together. So yeah, it’s pretty incredible.

Reporter: Colin, did you hear any of this kind of music before working on this show? ‘Cause it seems like you’re bringing a generation of bluegrass and things like that that [you] haven’t heard before.

Dean: Well, yeah, I’ve heard some bluegrass before. My mom was just going on channels because she got bored of her old alternative music. So we found bluegrass and we were like “Ahh!” Kinda like countryside *twanging sounds*.

Reporter: So what should we expect to see during this series, any messages or what’s really going on.

McHale: Well, the overarching story is that it’s just these brothers trying to get home, they’re lost. But there’s some twists and turns and some reveals about who these characters are, the two brothers, and about the Woodsman who’s this mysterious guy in the woods who you can’t really tell if he’s a good guy or a bad guy sometimes.